A hunter sets his sights on Tenko’s pet tiger, Ninjara. 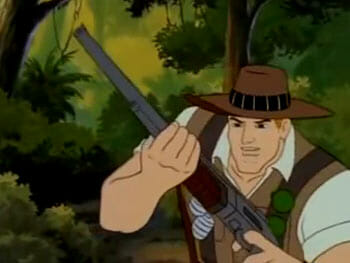 An asshole hunter named Travis Cage chases after a silverback gorilla, but ends up falling into an underground cavern. There, he finds the Diamond Starfire Gem: “Looks like I bagged a big one after all.” 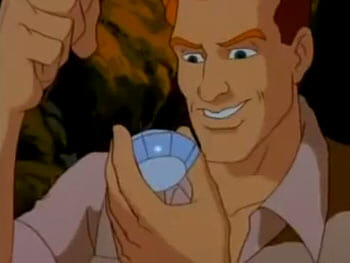 Cage’s find is reported in the papers; Tenko and the gang head to Africa to meet with Cage, but Jana and Jason beat them to it. They make a deal with Cage that if he gives them the gem, they’ll give him the opportunity to hunt Tenko’s rare white tiger cub, Ninjara. 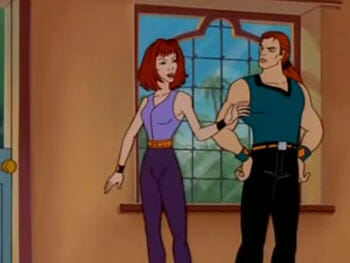 These two are always causing trouble

We move back to Tenko’s group, which has just arrived at the African airport. As Bolt and Hawk are tied up doing paperwork in customs, Shonti takes Ninjara out for a car ride. 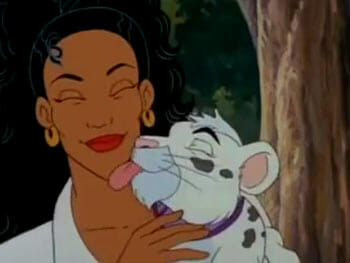 Shonti, by the way, is a new character – an animal trainer hired by Master Hikita (even though Tenko didn’t get Ninjara until after Hikita died). Anyway, the car drives over a spike trap, Cage knocks Shonti out with gas, and Ninjara makes a run for it. 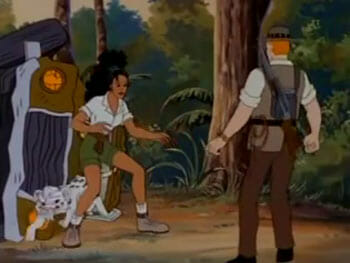 Burdened with a huge conscience, Cage’s son goes out to warn Tenko of Cage’s plan to trap Ninjara. Did I mention that Cage has a son? Cage has a son. 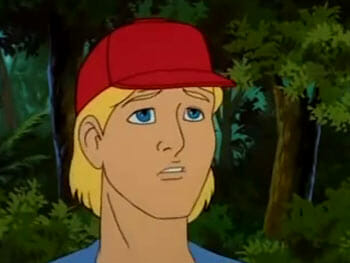 Day turns to night, then back into day, and Cage finally catches Ninjara. It took him all that time to catch a tiger cub? 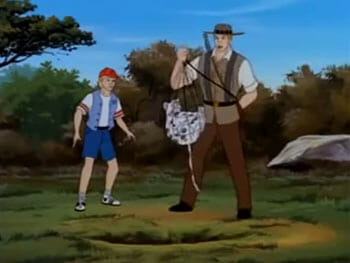 Tenko and co. find Shonti then catch up to Cage, but Jana and Jason also arrive. The twins double-cross Cage to get the Starfire Gem, then tie him and his son to a tree that they subsequently set on fire. 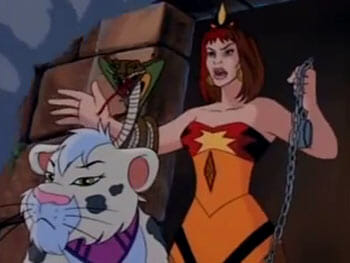 Jana and Jason turn on Cage

Jana uses Cage’s Gem to make a giant snake, but Tenko beats it up and a freed Ninjara retrieves the gem. The twins escape, while Cage and his son escape their bonds. “My hunting days are over,” says Cage. 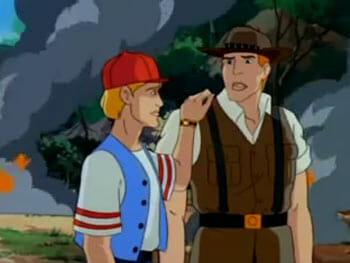 At the very end, Bolt and Hawk finally finish their paperwork. 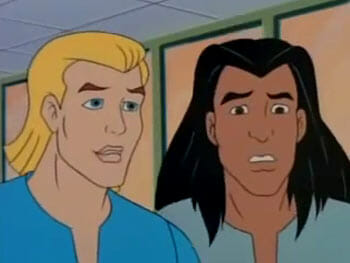 Four guys dance around a prism; they take off its faces to show its hollow, then put some back, and Tenko appears inside. I love that this trick has the “don’t try this at home, kids” disclaimer despite the fact that there’s no possible way kids can try this at home. 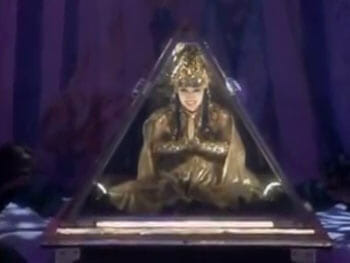 Tenko inside the prism

When I watch this, I just don’t care. The only thing this show has going for it is the action, but it’s plagued by bad fight choreography and animation. Cage was a weak villain with cliche dialogue, and it was hilarious how quickly he gave up hunting in the end.

Doors are for losers!

Also worth noting is that in one scene, we learn that Tenko doesn’t like doors, preferring to use her magic to walk through them instead. Tenko, you are lazy. 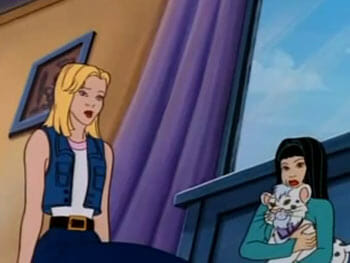 I’m glad this episode remembered Ali from the last episode and that she’s now a member of Tenko’s group. A lot of cartoons like this don’t bother with continuity – even minor continuity like this.