Last year I covered one of several Star Trek comics I drew when I was in elementary school. This one is just as weird and nonsensical as that one, if not more so. 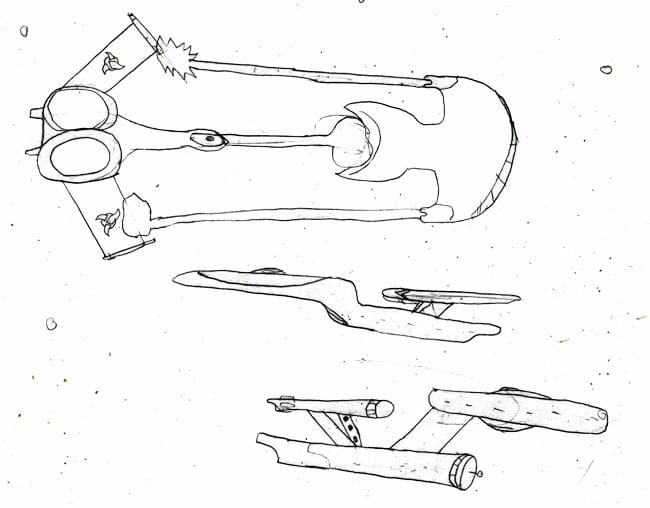 Like the first comic, this one starts with Kirk on the Enterprise bridge watching an episode of Star Trek – this time it’s the highly acclaimed The City on the Edge of Forever. Good choice.

The Enterprise encounters ripples in time

The Enterprise gets caught in some random time ripples and is sent into the future: the 24th century. 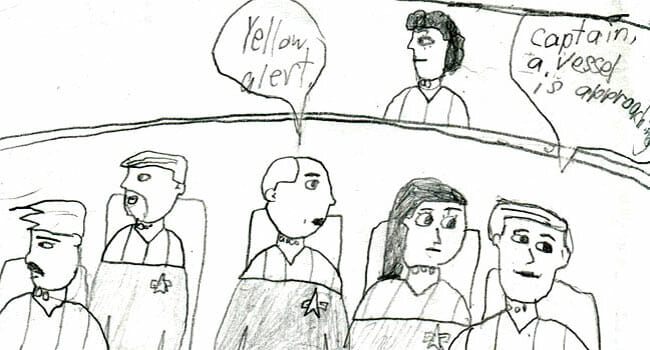 The bridge of the Enterprise E

Here, the Enterprise E is escorting the Defiant to somewhere or other. They find the damaged TOS Enterprise and send a landing party aboard to rescue its crew (and modernize their uniforms because priorities). 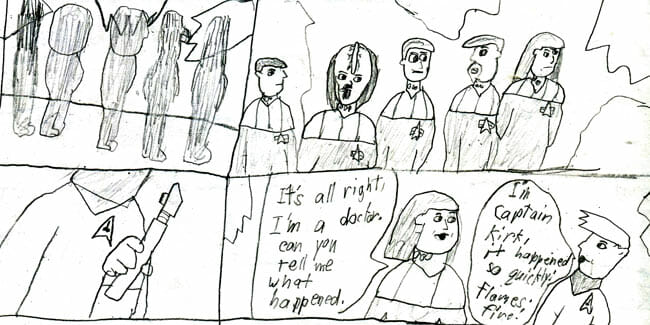 I love that they just release the TOS Enterprise crew from sickbay and let them wander around the ship without telling them where they are or what’s going on.

Q shows up as a little boy and starts playing practical jokes. First he puts McCoy in a space suit and throws him overboard.

He turns Riker into a baby and Data into a toaster, then the rest of the crew into various animals.

I don’t know what’s going on with the crew on the Defiant, since they’re ignored here. I think they get turned into animals too.

A shuttlecraft piloted by Trelane picks up McCoy: “Q is a sophisticated alien like me with magical powers,” says Trelane, “the difference is he’s wackier than me!”

For some reason, Trelane disguises the shuttle as a Borg cube and attacks the Enterprise, then zaps himself aboard with McCoy. 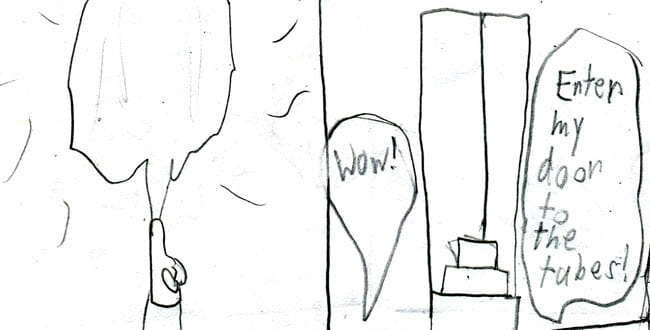 In sickbay, McCoy activates the Emergency Medical Hologram; there’s a giraffe person here but I don’t know why. Update: the giraffe person is Doctor Crusher. 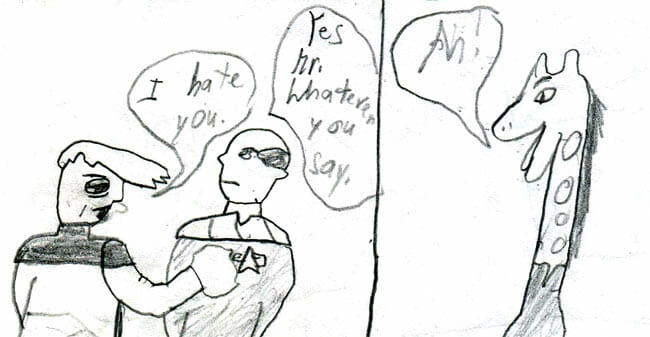 Q turns into a Tribble and the EMH starts shooting at him.

The EMH’s phaser bazooka does not amuse Tribble Q

I think Q and Trelane have a duel as well, and turn into Simpsons characters for some reason.

What is going on?

Then at this point Q just turns everything back to normal.

And now the Ferengi

A Ferengi ship captained by DaiMon Bok shows up.

Bok: It is I, DaiMon Bok!
Picard: Who cares?

Picard calls a Klingon ship to get some help by using…video footage of someone singing Mary Had a Little Lamb?

Stuff explodes and Q gets bored. This is probably when I got bored too.

Picard tells Q to return everything back to normal and that he’s learned his lesson. Uh, what lesson?

Everything’s restored, the Enterprise warps off with the Defiant and we see the TOS Enterprise back in the 23rd Century, where Kirk watches an episode of Star Trek: Voyager.