An Andorian officer returns home and faces an isolationist group that believes Andoria should leave the Federation. 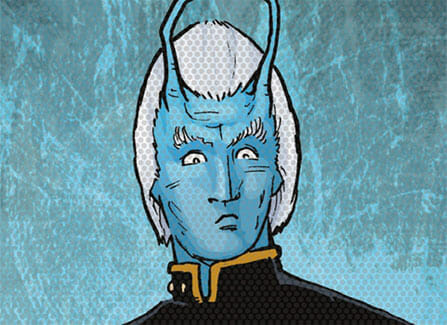 Taking place almost immediately after the end of TNG‘s run, the Enterprise is on course for Andoria. Captain Picard is to meet with its chancellor to get the Andorians more involved in Federation affairs…but this story isn’t about that.

In Ten Forward we meet our protagonist, Commander Ortees Sharad, a security/Starfleet Intelligence officer. Counselor Troi sits with him because she thinks he’s lonely, but he’s really just worried about threats to the Federation – the Borg, the Maquis, and now the recently contacted Dominion.

A group of bullies welcome Sharad to Andoria

After the Enterprise arrives at Andoria, Sharad beams down and is immediately bullied by a group of assholes who don’t see him as a “true” Andorian because he’s a member of Starfleet. Sharad’s older brother Shaa, a guardsman, shows up and scares the assholes away. 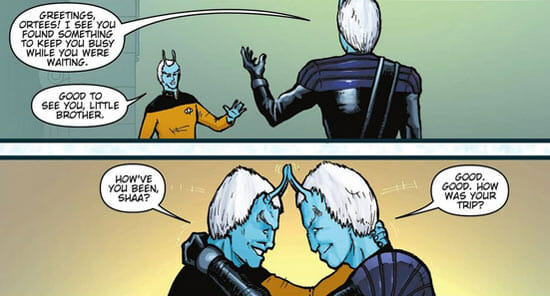 Sharad with his brother

Sharad has dinner with his family, and we learn about a group on Andoria called the True Heirs of Andor (THA) that believes the Federation isn’t properly serving Andorian interests, and that Andoria should withdraw as a member world.

Sharad catches up with Thrynn

Later, Sharad meets up with his old girlfriend Thrynn to catch up, but it turns out she’s a member of THA. Sharad is bonk-bonked on the head and taken to a cell where he is introduced to Thrynn’s superior in the THA, General Kovan.

Sharad finds himself in a cell

Sharad invokes the Ushaan (as seen in an episode of Enterprise) and challenges Kovan to a duel. This was Sharad’s plan from the beginning; he already knew Thrynn was a member of THA and that she would lead him to Kovan.

Sharad wins the fight and kills Kovan: “I have done what I set out to do by cunning and skill, passion and honor! I am a true Andorian and I am prepared to die! Are you?” The other THA Andorians charge at Sharad and the issue ends.

This comic took a huge risk in focusing on 99% original characters never before featured in live action Star Trek (the 1% being Deanna Troi’s cameo at the beginning), but it paid off. Because Sharad was an original character, the writer was free to do whatever he wanted with him – even kill him off!

Sharad about to deliver the final blow

What I liked most about the story was that it used the fact that Andorians were hardly seen in the 24th Century Star Trek shows as a starting off point. The real world reason was because Roddenberry wanted to keep TNG distanced from TOS, and the few times Andorians did appear in TNG, the make up looked awful. But this comic provides an in-universe explanation: the Andorians were becoming isolationist.

Don’t let the art style turn you off this comic!

Overall a very strong issue, with the always topical story of old ways vs. new. Some might not like the (sometimes) cartoony artwork, but that shouldn’t stand in the way of reading this strong story.