Christopher Pike, still recovering from recent events on Talos IV, questions the worth of being a starship captain, while fighting mysterious aliens in Earth’s solar system. 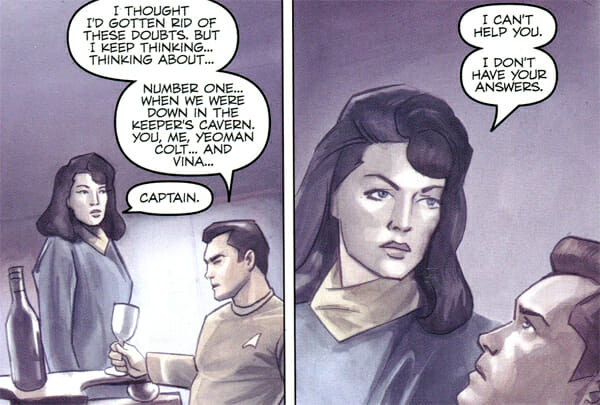 Captain Pike chats with Number One

Not long after the events of The Cage, the Enterprise heads back to Earth. Captain Pike meets with Number One in the briefing room. He’s still shaken up and doubting himself.

Running to the bridge

The Enterprise suddenly gets attacked by a mysterious alien ship. Pike forms a boarding party containing Yeoman Colt, among others, and transports over to their opponent’s ship.

Firefight with the aliens

The party immediately come under fire by crustacean-looking aliens. Colt is able to sabotage the aliens’ engines to cause a warp core breach, and the landing party is beamed back up just in time; however, Pike laments the loss of two of his officers that died in the firefight. 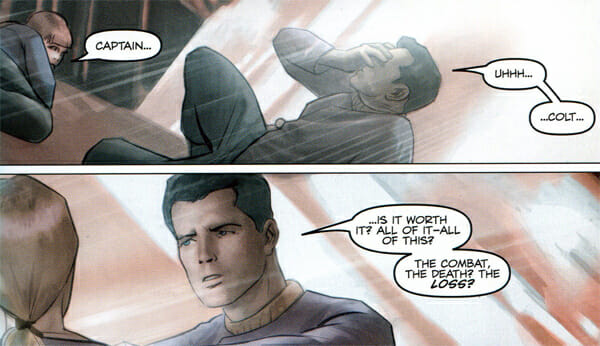 Colt doesn’t have an answer for him

Twelve years later, Fleet Captain Pike tours the USS Exeter as it prepares for a training exercise. Exeter’s captain? The former Yeoman Colt. Exeter heads to Jupiter, where it gets a distress call from Europa base – they’re being attacked by an alien ship. The very same aliens (now identified as the Halogian) that attacked the Enterprise twelve years before! 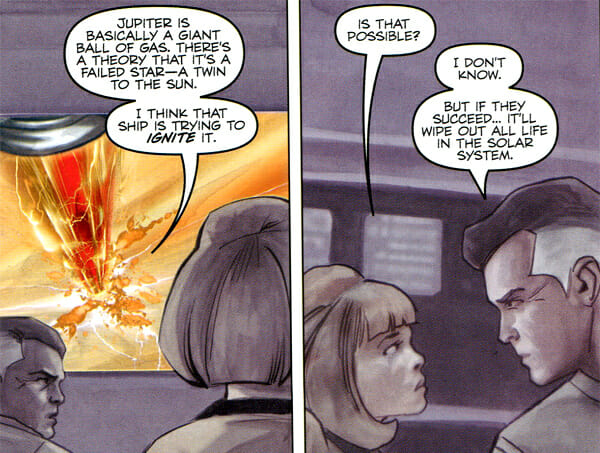 The Halogian ship fires a beam at Jupiter; they’re hoping to ignite it and destroy all life in the solar system. Exeter is hit and suffers heavy damage. Pike heads down to engineering to help the struggling cadets, while Colt orders phaser fire to focus on the Halogian’s engines. The Halogian ship is destroyed, but there’s an explosion in Exeter’s engineering section… 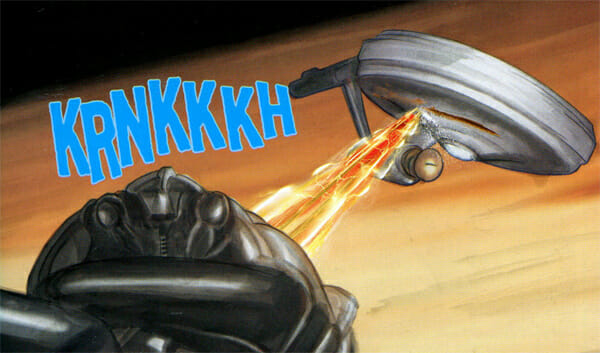 The Exeter comes under fire

Pike suffered intense nerve damage and radiation burns and is now confined to the “one beep for yes, two beeps for no” wheelchair he was in in The Menagerie. A tearful Colt kisses Pike, and finally answers the question Pike posed earlier – is it worth it? “It was. Every minute.”

It’s always good seeing a Star Trek story in the Pike-era. The long time span this issue covers makes for a more epic tale. We get to see how Pike was crippled, though the whole scene plays out like a rip-off of the Star Trek Generations opening, with the experienced captain sacrificing himself for the inexperienced captain and crew. 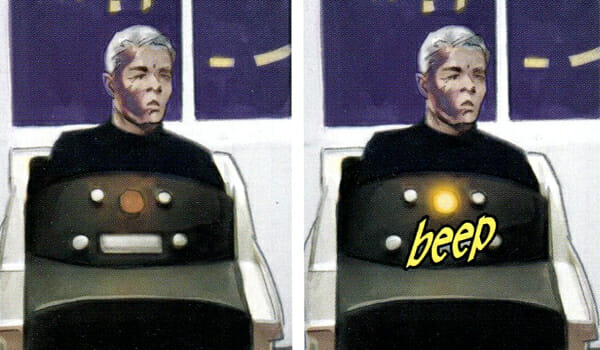 Pike agrees with Colt – it was worth it

The art was interesting, with a watercolor art style. Some people don’t seem to care for it, but I didn’t find it too bad.