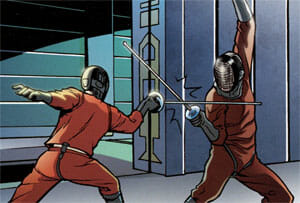 On the Excelsior, Captain Sulu practices fencing with his first officer, Lt. Cipriano, and wins. A rematch is interrupted by an incoming message from Admiral Renshaw, who assigns Sulu a new mission; it seems the Tholians are pretty cranky about a Federation colony being too close to their border, and it’s Sulu’s job to smooth things over with them. The number one thing Sulu has to remember is to not be late, since Tholians value punctuality above all else.

On the way to the rendezvous point, the Excelsior picks up a distress signal from another Starfleet ship (the USS Shepherd) that was struck by a solar flare. Sulu diverts course to provide assistance. “Let’s hope we can make this a fast rescue,” he says. 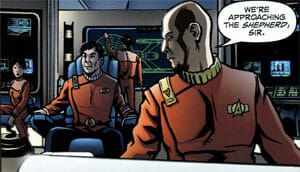 The crew of the Shepherd is rescued, but the whole operation makes the Excelsior 37 minutes late. The Tholians are nowhere to be seen, at least not right away – Cipriano finds them on long range sensors heading for the disputed Federation colony.

Sulu has the Excelsior go to maximum warp to get in front of the Tholians. The Tholian commander hails Sulu and is like “Dude, get out of our way.” Sulu’s all, “Come on, man. Let’s not start a war. It’s just 37 minutes. Is punctuality more important than mercy?” The Tholian concedes that it’s not, and Sulu tells Cipriano that diplomacy is a lot like fencing. 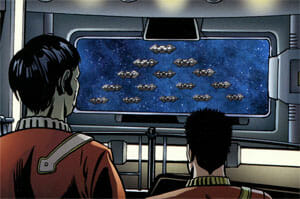 Not bad. The story was fairly standard, not too simple or complex, and the problem was solved in true Trek fashion, with dialogue instead of violence. It’s always welcome seeing a Captain Sulu adventure. Also welcome is the inclusion of the Tholians, considering they’ve only shown up in 4 out of the 700+ episodes of the Star Trek franchise.

The ink and coloring was great, but I felt some of the drawings of Sulu were a bit off and didn’t really capture George Takei’s likeness very well. The ships looked excellent, though. 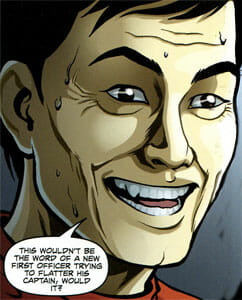 There were a couple errors where the wrong ship is shown, such as when the Shepherd switches from an Oberth to a classic Constitution in one panel. This really confused me, and I thought Excelsior was thrown backwards in time or to an alternate universe for a moment!

Overall, this issue had competent storytelling, but it didn’t really make an impression or make me want to reread it anytime soon.