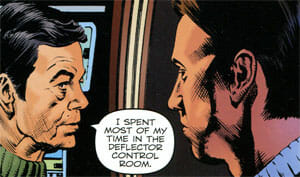 Months after Captain Kirk was lost on the Enterprise B’s ill-fated maiden voyage, the Enterprise has relaunched on its first official mission to stop an outbreak of Terrellian virus on Antares. The crew is joined by Dr. Leonard McCoy, sprung out of retirement by a “Reverse Activation Clause.” He meets with Captain Harriman, who still feels really bad about the loss of Kirk and plans to resign from Starfleet at the completion of this mission.

Meanwhile, a Klingon ship in orbit of Antares monitors the incoming Enterprise. The Klingons don’t like how the Empire signed the Khitomer Accords and is working on peace with the Federation; “…honor and glory cannot be negotiated away with a thousand accords,” says General Choroth.

Back on the Enterprise, McCoy visits Harriman in his quarters and the two share a drink. McCoy gives him a bunch of advice about being a captain that he learned while watching Kirk, like lying all the time and not showing fear. 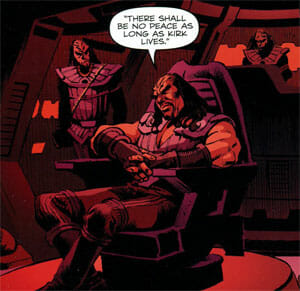 Again with the Klingons

The Enterprise crew detects the Klingon battlecruiser, and Harriman is summoned to the bridge. General Choroth accuses the Enterprise of violating the Khitomer Accords, since Antares is in Khitomer-disputed space, but Harriman tells him it’s a-okay because they’re on a humanitarian mission.

The Klingons start firing on the Enterprise and damage its shield emitters and weapons. Harriman surrenders, and the Klingons give him one minute to prepare for boarding parties. However, instead of doing what they say, Harriman beams up the Klingon crew and beams a bunch of torpedoes over onto their ship. It’s destroyed, the Enterprise sails away triumphant, and McCoy tells Harriman he’s really awesome. 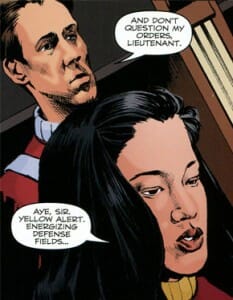 I always liked Harriman and the Enterprise B in their brief but memorable appearance. I know he’s not too popular among Trek fans because he was made out to be such a wimp, but that’s exactly why I like him. Harriman’s not a super captain like Kirk; he’s just a normal guy. He’s an underdog.

One of the benefits of showcasing a minor character in these comics is the fact that since they’re pretty much a blank slate, they can actually develop and go through changes. Harriman goes through such a change as he gets mentored by McCoy and slowly grows a backbone. At the end, I was left wanting to see more of Harriman and his captaincy. 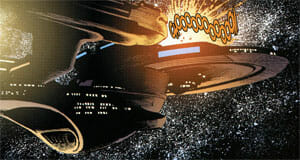 The Enterprise is hit!

Harriman’s solution to dealing with the Klingons seemed a little too easy and wasn’t particularly groundbreaking. If it was always this easy to defeat an enemy, you’d think this tactic would get more use.

What drags this comic down the most is its lengthy flashbacks. Although the exposition was essential, I felt there were too many callbacks, and the comic was already short as it is. I’d be fine with a truncated flashback to Star Trek Generations, but I felt the flashback to Star Trek III, although necessary for inspiring Harriman’s solution to the Klingon attack at the end, was a little overboard. In this case, tell, don’t show.

The art and coloring was good. My only complaint here was that it was a little obvious that some of the drawings used shots from Star Trek Generations as reference. 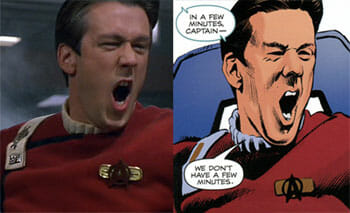