Leslie Wong joins the crew of the Cairo as its new first officer, but can she handle its fussy captain, Edward Jellico? 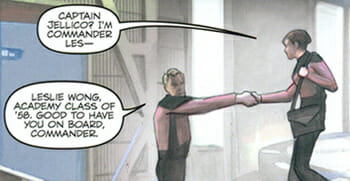 At Campagna Station, the USS Cairo picks up its new first officer, Commander Leslie Wong. Captain Jellico greets her in the transporter room and immediately tells her of their current assignment, to patrol the Cardassian border in the Solarion system. Already, Wong is a bit perplexed by Jellico’s command style, particularly his use of four-shift rotations instead of the usual three.

A Cardassian ship is detected nearby, but it only skirts the edge of the system. Wong grabs Jellico from his ready room and chastises her for not contacting the Cardassians, as is standard procedure. Wong explains she wasn’t sure about the protocols. “I don’t want excuses, Leslie.”

Jellico opens a channel to the Cardassian ship, commanded by Gul Zarkat, who claims to be in the system for scientific purposes. Scans from Jellico’s Bajoran science officer confirm that Zarkat isn’t lying and that he is indeed commanding a science vessel, albeit a lightly armed one.

Meanwhile, inner monologue reveals that Wong doesn’t feel comfortable with Jellico, having been chewed out in front of the bridge crew twice, while he openly praises the Bajoran science officer. Wong plans to transfer off the Cairo after the mission’s end.

After modifications to the Cairo’s sensors, the science officer discovers that the seventh planet in the Solarion system has a funky orbit that takes it past the eighth planet. So while the Cardassian ship is outside the latter, it is inside the former, and according to the treaty, the Federation border is the outermost planet; the Cardassians are violating the treaty.

Jellico confronts Zarkat about the treaty violation and orders him to withdraw, but Zarkat rebuffs him. The Cardassian ship heads to Campagna Station and starts attacking it; the Cairo arrives and manages to disable the Cardassians’ engines. Zarkat surrenders.

Later, Wong delivers an inventory of the Cardassian ship’s cargo to Jellico’s ready room. It seems they wanted to capture Campagna Station and use its resources to research metagenic weapons. Jellico compliments Wong’s work and her adherence to protocol. In a personal log, Wong states she’ll be staying on the Cairo after all. 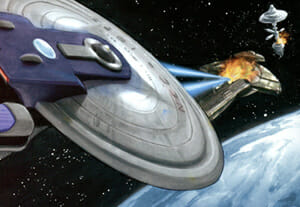 Story-wise it was okay. I liked how the story acted as a prequel to Chain of Command. Jellico acted grumpy and abrasive, true to his live action portrayal.

I was surprised to find that Leslie Wong is an actual canon character, albeit she was never seen. She (and the Cairo) were mentioned in a casualty list on Deep Space 9. I think it’s pretty cool this comic actually showed Wong and fleshed her out beyond this single mention.

Apart from Jellico and Wong, none of the other characters really stood out. The closest we got was the Bajoran science officer, but she was only there to be Wong’s opponent in gaining the captain’s favor.

This issue doesn’t really fit with the other stories in the Captain’s Log series, since it’s the only tale of the four to take place in the 24th century. The cancelled Rachel Garrett issue would have made a better fit instead.

The biggest flaw in this comic was in its execution: it was a bit flat leaving me bored through most of it.