Spock joins the Enterprise crew and no one likes him, but he proves to be an asset on their next mission.

New Vulcan on the block

At Captain Pike’s request, the Enterprise receives a new crewmember, the Vulcan science officer Spock (you may have heard of him). Most of the crew has a hard time working with him due to his lack of emotion and objective thinking. Pike wonders if maybe this was a bad idea.

The landing party assembles in the transporter room

The Enterprise heads to the planet Magefferus to settle a long, bloody dispute between its warlike military and peaceful civilians. A landing party consisting of Pike, Spock, Tyler, and a few others beam down to meet with the planet’s leaders.

However, the party instead arrives at the ruins of a city with skulls littered everywhere – it’s a trap! A group of Magefferan soldiers start shooting at the Enterprise crew, killing security officer Reed (Malcolm‘s son?). Communicators and weapons are being jammed, but Spock figures a way to overcome it and stuns the soldiers with his phaser.

The party vacates the area, but some guys are pissed at Spock not mourning Reed’s death or wanting retribution. He stresses finding a peaceful solution: “Of course they attacked. It is their nature. We are to provide them with an example of another way.”

The landing party is captured

The group ends up being captured and the Magefferans prepare to kill Pike, but stop after noticing Spock’s lack of fear. Spock explains how Vulcans come from a savage, warlike background like the Magefferans, but have since found a way to control their emotions. The Magefferans are so fascinated that they release the Enterprise party so they can stare at Spock and poke him a few times.

Later, back on the Enterprise, Pike says in a captain’s log that several Federation envoys (made up of mostly Vulcans) will be sent to Magefferus to negotiate peace. He decides that Spock being a member of his crew was a good idea after all.

The Magefferans are fascinated by Spock

“We are a piece in a long-term plan to make the universe a better place,” Pike says in his log, “But part of me believes Spock will become a bigger piece to it all. Part of me thinks we are more the start of his journey than he is the start of ours.” 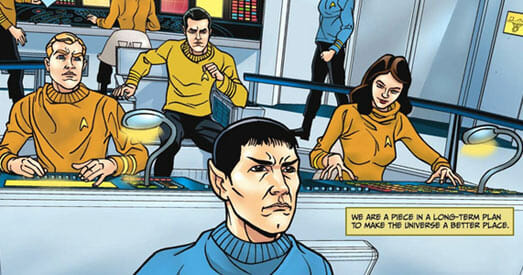 I liked this ending panel

Not a bad story, and I thought showing Spock’s first days and first mission on the Enterprise was a good hook. The ending was a little too contrived, but I’ll give it a pass. The artwork is unique and stylized, giving all the characters a Peter Chung look. It might put some people off, but I’m okay with it and will also give it a pass.