I made an equivalent of an annual for my elementary school Star Trek comics, featuring four different stories; I even used a sheet of manila paper on the front to mimic a hardcover book! 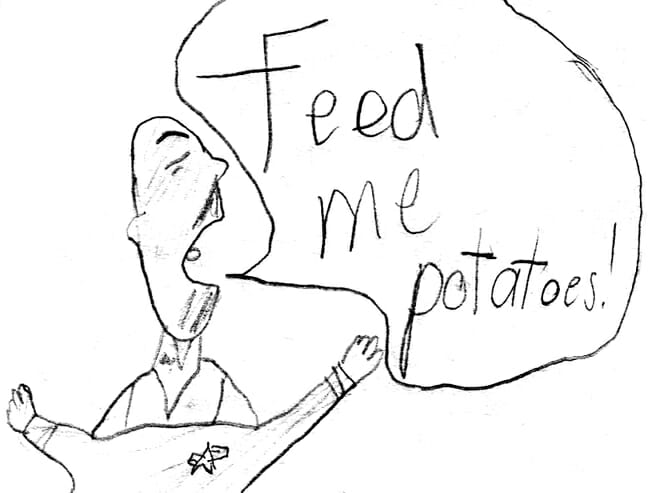 I remember my teacher saw me working on this in class one day and thought it was neat. Thanks, Mrs. J!

Issue #4: In the Mouths of the Prophets

A Deep Space Nine comic inspired by the episode The Reckoning. A hungry Sisko (who’s channeling Homer Simpson for some reason) and Dax take a runabout over to Bajor where a Vedek shows them an ancient, donut-shaped artifact.

Sisko trips on a rock and crashes into the artifact, which shatters on his forehead.

He has a vision where he sees some rabbits dancing in a conga line; a Prophet takes on Jadzia’s form to give Sisko a warning – “If you eat today, something terrible will happen!” 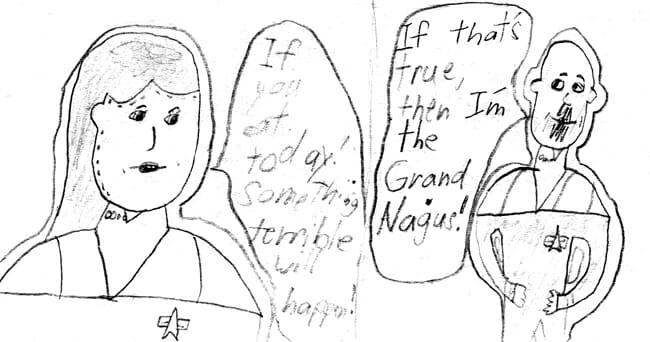 In DS9’s infirmary, Sisko awakens with a type of Midas touch, where everything he touches turns into a donut. First he tries it on Bashir (and eats him). 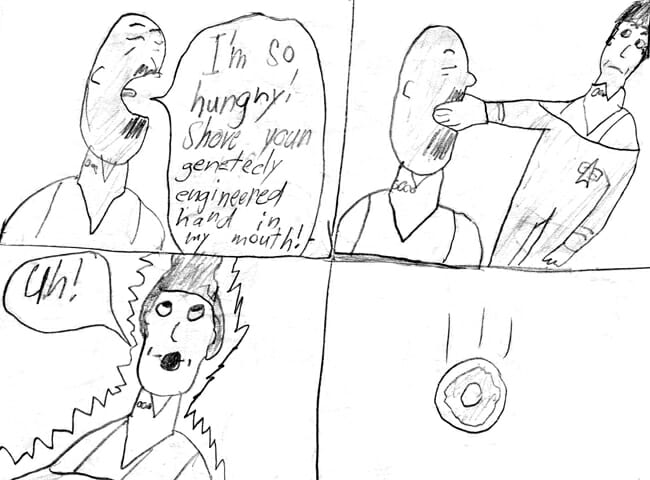 Picard has a cameo after taking the wrong turn at the studio. Spock beams in to take him away. 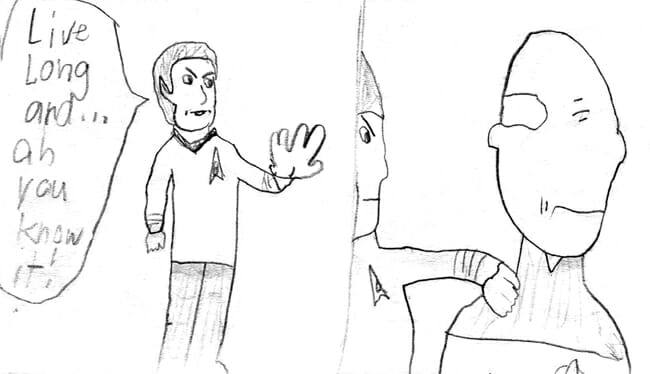 After Jake is consumed, the Jadzia Prophet reappears: “Three strikes and you’re out! Actually, now your entire crew are now donuts!”

Sisko celebrates, but wakes up. It was all a dream.

Wesley appears on the bridge of the Enterprise, having returned from exploring different planes of existence with the Traveler.

Everyone immediately starts bullying him, starting with Worf, who spits (?) all over him and Troi, who kicks his face: “Wesley, I’m sensing pain.”

Wesley visits his mom and finds he’s been kicked out of the Crusher family. “You’re just too annoying,” Beverly says. “But don’t worry, Dr. Pulaski adopted you.”

Pulaski shows up just to slap Wesley and he gets sucked through a dimensional hole straight to the Q’s courtroom: “You are being put on trial for being a grievously annoying, child-like person. Do you have anything to say before I pronounce sentence?” Wesley’s defense – “I am a child!”

Q turns him into a dog and they play hide and seek.

Poor Wesley really suffers here: a cat scratches his face, he gets slashed by a musketeer in the holodeck, he breaks a leg in the theatre (ha-ha), and then he finally dies.

Yikes, this sure was mean-spirited! I made this in the brief period I was on the “Welsey Crusher sucks” bandwagon (hey, everyone was doing it!).

Eh, I phoned this one in. It’s supposed to be a two page musical, sing-along type thing all about Q.

Geordi pops in at the end to tell Q that his lyrics don’t rhyme.

While surveying a planet that’s made up of 50% sugar, Voyager gets an intruder alert.

Chakotay barely survives an encounter: “It was a huge…gigantic…monstrous…monstrosity.”

We see a xenomorph-like (or Species 8472-like) shadow of the intruder, but turns out it was a mouse the whole time. 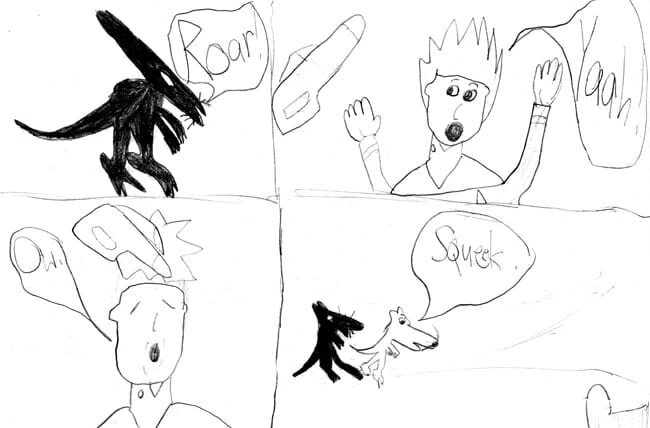