In elementary school I drew Star Trek comics. They’re about what you’d expect at that age, but they did have a comedic bent as I was heavily inspired by Sev Trek at the time. 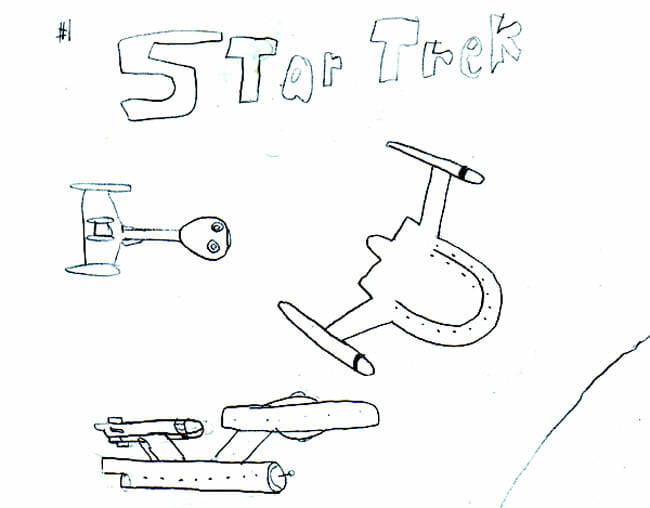 The comic starts all meta-like with the Enterprise bridge crew watching the latest rerun of Star Trek Voyager. Spock feels ill and heads to his quarters to drink a liquid out of a “Vulcans are cool!” mug to initiate the “Vulcan Illogicity Ceremony.”

What proceeds is pretty much a rip-off of Amok Time, with Spock becoming overly emotional; he gains control of the ship and sets course for the Romulan Neutral Zone.

Kirk and Bones watch a tape where Spock explains the ritual, which both Vulcans and Romulans must undergo. Vulcans drink a liquid to temporarily become illogical, while Romulans drink to become logical.

A Romulan Bird of Prey suddenly attacks but the Enterprise beats the crap out of it.

Dr. McCoy pretends to be a Romulan for some reason

Kirk, Dr. McCoy, and Chekov beam to the remains of the Bird of Prey and check it out. Bones plays a practical joke by pretending to be a Romulan spy for some reason and Chekov burns his hand on something (as he does in The Motion Picture).

On the way to the planet, the Enterprise gets caught in a TMP-style wormhole

They rescue a young Romulan woman and find that the Vulcans and Romulans have assembled for a meeting on the planet Numerickis VI.

A random Vulcan calls for an end to the fighting

There, a zillion ships fight over who gets to beam down first, but a random Vulcan guy orders a halt to the violence: “We all came here for a reason, and that reason is our life. All of us will beam to the planet and do what you must do!”

The First Vulcan and pure evil

The Enterprise sends down an away team, and the spirit of the first Vulcan is summoned – he warns that his enemy, the embodiment of pure evil, is trying to control his powers.

Scotty comes down in a shuttlecraft to pick everyone up.

Kirk and Spock on a “roller coaster ride in another dimension”

Kirk and Spock are left behind and enter some sort of portal to another dimension, where they get a vision of the Enterprise being destroyed.

The first Vulcan lends a hand

Then the first Vulcan reappears and allows Kirk and Spock to use his powers. All they have to do is make wishes!

They return to the planet and wish for invisibility and phaser rifles and just blast pure evil until it’s gone.

Also I think there was an asteroid on a collision course with the planet, but that gets destroyed too.

McCoy takes Kirk and Spock back to the Enterprise

Later on the Enterprise bridge, Kirk and McCoy reflect on recent events with a deep, philosophical conversation:

“The only pure evil is in a crook,” Kirk says, and the Enterprise warps off.