Nth Man The Ultimate Ninja was a comic series published by Marvel that ran 16 issues from 1989 to 1990. It was about a powerful telekinetic named Alfie who unintentionally started World War III, and the ninja named John Doe sent to kill him.

This issue takes place in the year 1968 at the orphanage Alfie and John were raised, and gives backstory on their early years. 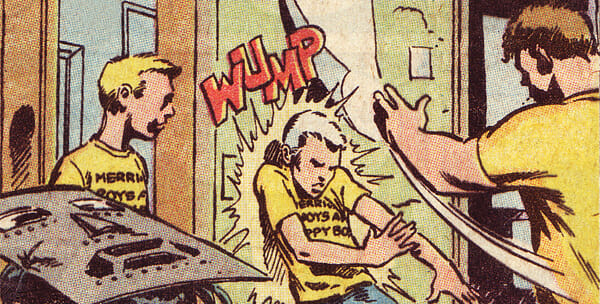 Huey pushes John into the wall

At the Merrivale orphanage, we meet a group of boys acting out a Daredevil vs. Doctor Doom scenario from a comic book – there’s Marvel fan Alfie, saintly John, bully Huey, and…uh, a boy named Turtle.

The orphanage is run by the abusive Mr. Biggot, who cares more about drinking and spending “quality time” with the nurse than actually taking care of the children.

We get a weird scene where apparitions of Russian soldiers appear, materializing through the walls with a woman named the Ice Queen, plus adult John and adult Alfie. But this is quickly forgotten as Alfie’s newly adoptive parents arrive to take him home.

Artie with his new family

Biggot reminds John that a burned woman brought him and Artie to the orphanage, warning that one of the boys was evil and the other was good. Biggot is convinced Artie is the evil one.

In his new home, Artie opens his beloved box of comics, but finds that Huey replaced all of them with dirty magazines. And the comics? All destroyed. 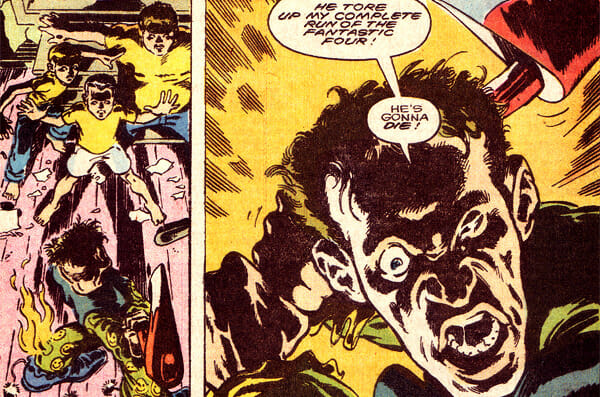 Artie is furious and uses his newly manifested psychic abilities to possess Mr. Biggot’s body and try to kill Huey with an axe. The orphanage catches on fire, but everyone escapes just in time.

Well, except for the possessed Biggot. 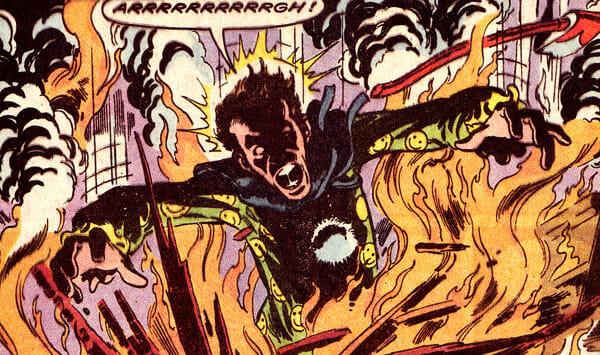 This was my first exposure to Nth Man, and I was wholly unprepared. For one, I was expecting a lot more ninja action for a comic called The Ultimate Ninja. The issue started off fairly grounded in reality, with kids in an orphanage, and I half-expected the story would be about them getting together to make a fool out of Biggot. Things got weird and unpredictable pretty fast. And looking at descriptions of the other issues, weirdness is par for the course in the world of Nth Man. 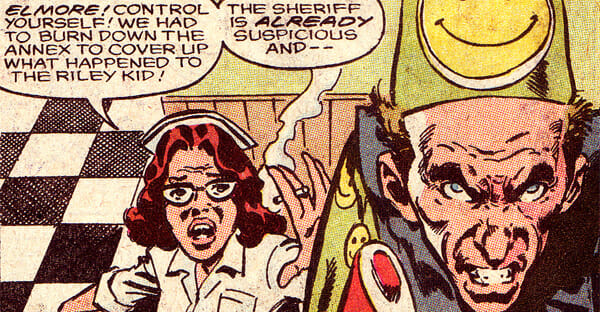 Nth Man is the type of series where you can’t pick up a random issue and join in; you have to read it from the beginning. So with this being issue 8 (of 16), I had difficulty getting into the story. But the more I learn about Nth Man the more I appreciated what this issue does. It takes a break from the military action of the other issues (series creator Larry Hama worked on GI-Joe comics by the way), and instead takes the time to give us insight into the two primary characters’ origins and personalities.

Because of Nth Man‘s complexity, I suppose it’s no wonder this was cancelled – audiences probably couldn’t get into it. On the bright side, at least Nth Man lasted a couple issues longer than NFL SuperPro.