Kin was a six-issue miniseries published by Top Cow in 2000 about the discovery of a group of highly advanced Neanderthals living in modern day Alaska. 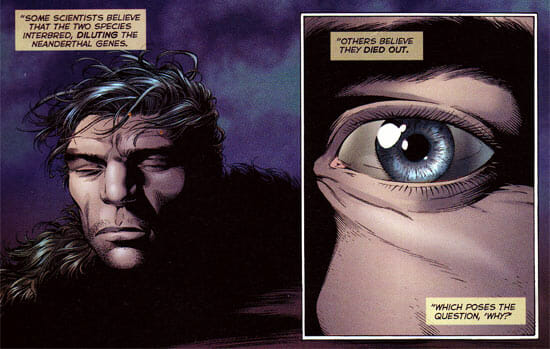 We begin our story in an S.I.A. complex – S.I.A. is a secret US government organization that probably stands for “Secret Intelligence Agency.”

Gaskell, a bald man who looks a bit like actor Donald Sumpter (with maybe a dash of Patrick Stewart) holds a briefing. He gives a history lesson on Neanderthals and Cro-Magnons, and how the former seemingly died out… 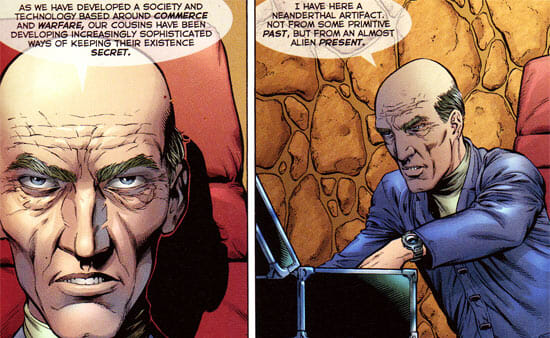 Gaskell pulls out an example of Neanderthal technology

But now it seems Neanderthals are still alive! They went into hiding in Alaska and developed a highly advanced civilization with alien-like technology. Gaskell shows his audience a sample of Neanderthal technology recovered by his men. He wants to acquire (steal) more, no matter the cost. 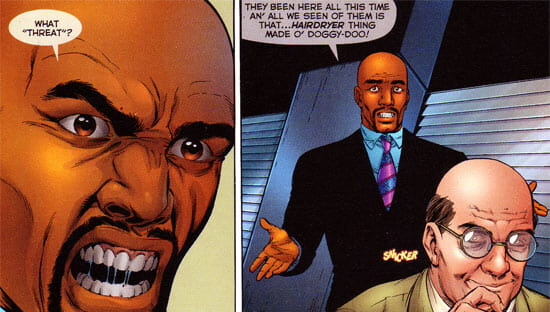 Trey has a bone to pick with Gaskell

One agent in the meeting, Trey McAloon, is not at all happy with this mindset: “This is their stuff.”

Trey visits his sick mentor, Mr. Pepper, in the hospital. They talk about Gaskell, and appear to be plotting to make a move against him…but it seems Gaskell’s already aware of this. After Trey leaves, someone heads into Pepper’s room holding a pistol.

Elizabeth Leaky knows how to make an entrance

In the icy Alaskan landscape, we see two of Gaskell’s men shoot a furry Neanderthal man.

Park Ranger Elizabeth Leaky comes across the wounded Neanderthal. His fur is actually a coat, which slides off to reveal a human looking man in a futuristic jumpsuit. 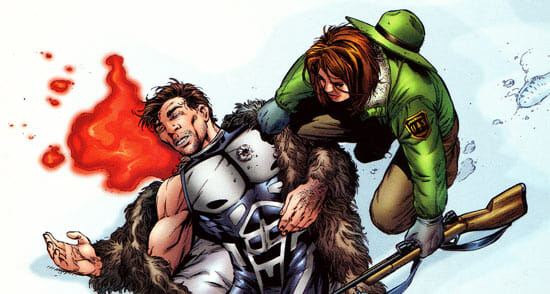 Not a bad start; this issue sets up the characters and premise, but that’s pretty much it. The dialogue and art is average. I’m not too crazy about Gaskell – he seems a bit too blatantly evil and could’ve been dialed back a bit. Leaky, on the other hand, looks like a lot of fun; she adds a bit of levity with her Marge Gunderson-esque attitude and “oh my giddy aunts” exclamation.

The story itself is a bit interesting and I wouldn’t mind reading more. At least to learn about the Neanderthals and how they’ve developed their society and technology. I’ve heard Kin has an inconclusive ending, so it could be a letdown, but at this point, it’s off to a decent start.