Similar to The New Scooby-Doo Movies and Batman: The Brave and the Bold cartoons, each issue of this comic features Scooby and the gang teaming up with other characters in the DC and Hanna Barbera universes. 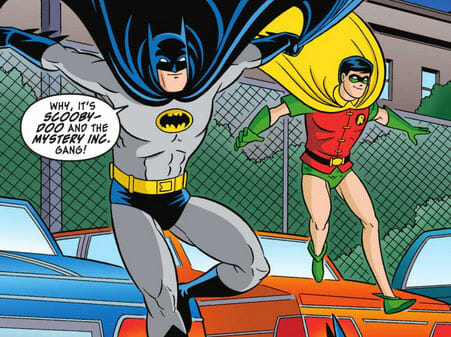 Batman and Robin once again team up with Scooby-Doo

We start with our heroes, the Scooby gang (or Mystery Inc. gang or whatever you want to call them) arriving at a parking lot in the evening. Tales of a giant bat creature have brought them here.

Daphne spots what she think is the creature, but it turns out to be Batman and Robin observing the Scooby gang atop a billboard ad. The two teams are already acquainted with each other, having worked together several times before. Turns out the Dynamic Duo is also looking for the Man-Bat and welcomes the assistance of the Scoobies. 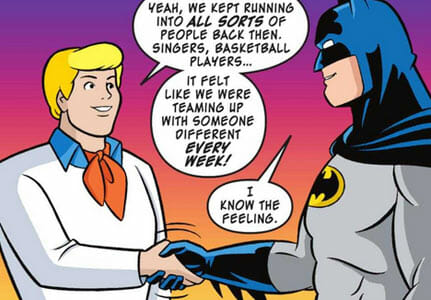 I love this meta-humor

A scream from a nearby shopping mall calls the united group to action, and they rush inside to find several men in Man-Bat masks pilfering a department store. The sight of Batman is enough for these robbers to make a run for it, but a single, net-dropping batarang is all it takes to stop their escape.

Once unmasked, the trio of criminals explain they were using the recent Man-Bat sightings to scare people away so they could pilfer and plunder. “All we had to do was show up in costume, and everyone ran away,” explains one of the crooks, “We didn’t even need guns!” 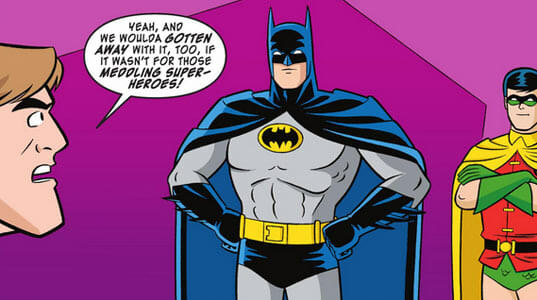 The Manbat criminals are caught

Velma sees one more Man-Bat-looking individual out of the corner of her eye scavenging a burger place. Did they miss one of the masked Man-Bat men? Nope. This Man-Bat’s the real thing! 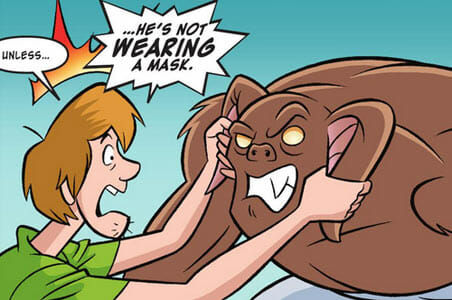 Batman leaps on top of Man-Bat and injects it with an antidote, reverting the creature into his human form of Dr. Kirk Langstrom. Meanwhile, the three robbers try to escape but are stopped by Daphne, Fred, and Robin.

The issue ends in typical Scooby-Doo fashion with Scooby putting on a Man-Bat mask to scare Shaggy and everyone laughing at them. 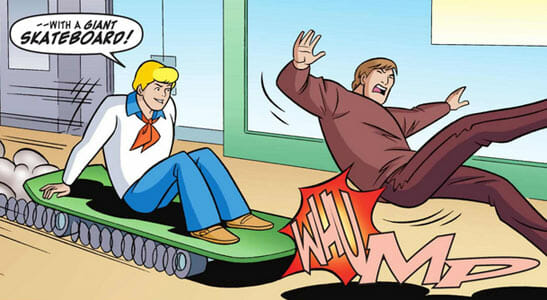 Fred catches one of the fleeing robbers

This was a fun read, with nice, bright colors and very inviting artwork. The story itself was okay, nothing too spectacular, but full of copious amounts of humor, including a lot of meta-jokes. I’m glad Man-Bat was the antagonist in this comic instead of the overused Joker and Penguin, who were used in the previous three Batman and Scooby-Doo team-ups. 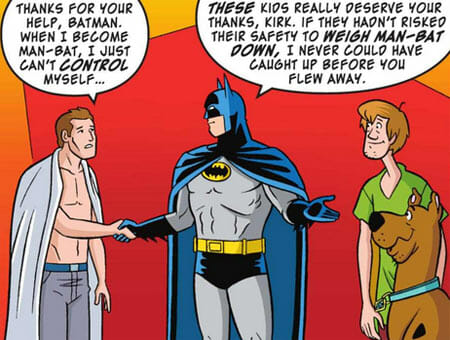 Dr. Langstrom thanks Batman and co.