Scooby and the gang once again work with Batman and Robin to foil Joker and Penguin’s plans – this time involving a flying suit. 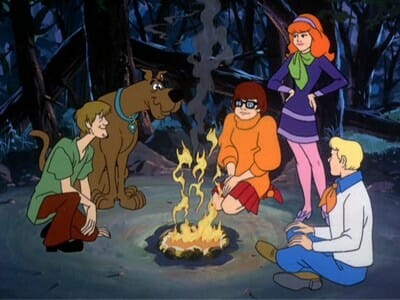 The gang camps out

Our story begins with the Scooby gang camping at an undisclosed campsite. Shaggy and Scooby go out to collect firewood and overhear Joker, Penguin, and a third man – Professor Flakey – nearby. The boy and dog try to skedaddle but get caught in a trap.

Fortunately for them, this trap was set by Batman and Robin, who were hoping to catch Joker and Penguin. “It’s a pleasure to be captured by good guys for a change,” says Shaggy. 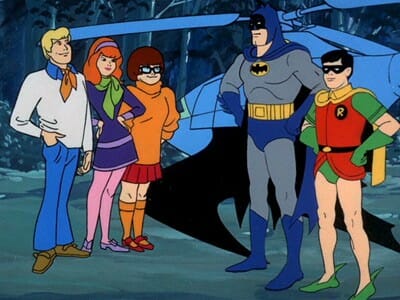 The two teams team up

Joker and Penguin don Dryad and Troll masks respectfully, and mess with their pursuers in what ends up being a long, tedious scene involving a rotating bridge that sends the Mystery Machine around in circles. 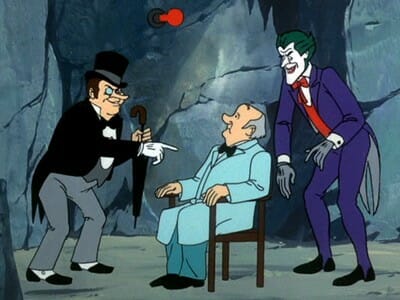 The teens find a cave with a secret passageway inside, leading to Joker/Penguin’s hideout, that can only be revealed by tripping on a rock. All five of them trip through once-at-a-time and enter the hideout. 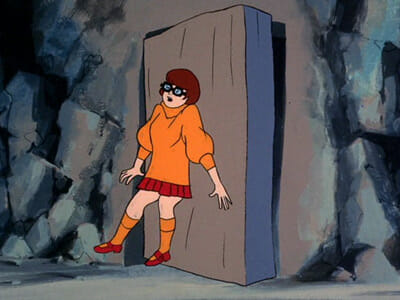 A bat starts chasing the gang. “I don’t believe in ghosts.” says Velma, breaking the fourth wall, “But I believe in bats!” Batman and Robin show up and hit the bat with their batarangs, revealing that the bat was a robot in disguise (but not a Transformer). Hey, how did Batman know it was a robot? What if it wasn’t?!

Meanwhile, deeper in the hideout, Joker/Penguin interrogate the captive Professor Flakey. They’re interested in procuring a suit he’s invented that allows its wearer to fly. He gives them a fake location and they fall for it. When Batman and the teens find Flakey, he reveals the true location of the suit – the Gotham Rubber Factory. 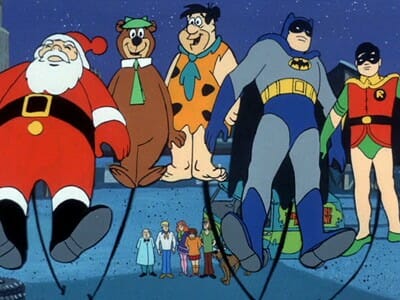 Outside the factory, we see some huge-ass Thanksgiving parade balloons: Batman, Robin, Santa Claus, Fred Flinstone, and Yogi Bear. Joker and Penguin show up in the Bat-Copter (which they stole earlier), and Scooby finds himself the unwitting wearer of the fight suit. He fumbles around at first, but gradually learns how to control it.

Batman and Robin show up to lend support, and Joker/Penguin fall victim to a falling Batman balloon and get apprehended. 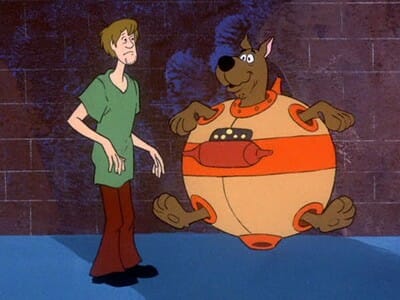 Scooby-Doo teams up with Batman once again…but was it really necessary? This episode just felt a lot weaker than the previous team up, which involved a counterfeit money scheme – more realistic and appropriate for Joker and Penguin, unlike the ridiculous flying suit here.

In true Scooby Movies fashion, we get a lot of filler scenes to stretch the runtime to 45 minutes. Joker and Penguin/Dryad and Troll shenanigans, I’m looking at you! I also zoned out a bit during some of the cave scenes. 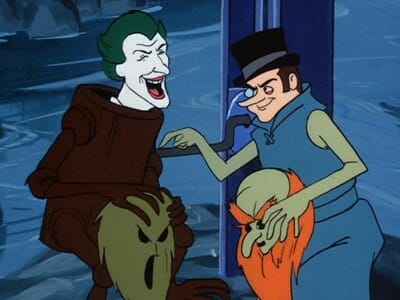 This scene was the worst

I liked how Batman and Robin remember the kids from their previous team up, but Joker and Penguin seemingly didn’t. Obviously they don’t give a crap. I also like how Batman uses “batnoculars.” 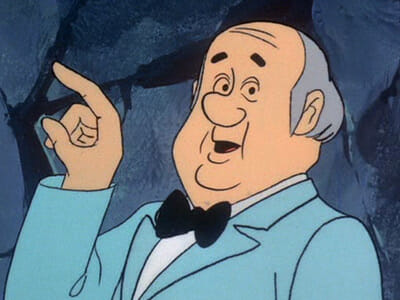 Let’s move on to Professor Flakey. The typical absent-minded professor archetype, but with a twist: he constantly muddles his speech, switching the first letters of word pairs, like “flop toor,” “lox babel,” and “Com Truise.” It was somewhat charming the first dozen times he did it…then it got really annoying, really fast. Kids would probably find it hilarious, though. Specifically kids under the age of 1.

Here is my number one question about this episode: Was Shaggy high through the whole thing? He seemed dumber than usual. For Christ’s sake, he didn’t even know what a moose was! He thought it was a horse with sticks. Then he ate miniature tires thinking they were donuts. To be fair, Scooby does the same, but he was probably influenced by peer pressure. 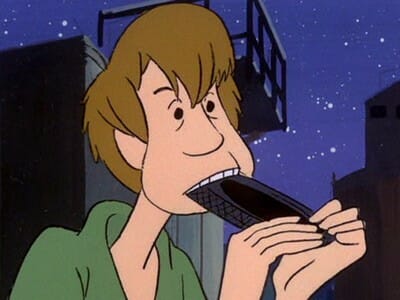 Tires aren’t meant to be eaten!