Phil Grayfield is an ex-football player-turned-sports journalist. While interviewing a reclusive sports collector, some robbers break in, and Phil gets doused in a “once-in-a-lifetime chemical combination” that gives him special abilities. Nothing super exciting, just increased strength and endurance. With these abilities, and a $5 million “experimental Football uniform” (read: armor), Phil now fights crime as SuperPro.

NFL SuperPro has a reputation as one of Marvel’s worst comic series; Phil’s adventures lasted a meager 13 issues before cancellation. 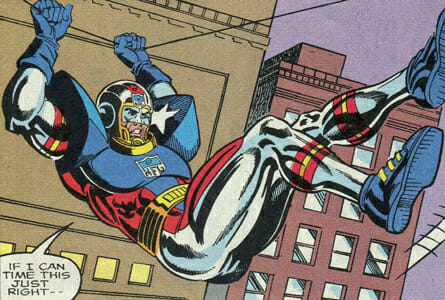 Tim Pressman, offensive tackle for the L.A. Raiders (and Phil’s old buddy from his NFL days) has been accused of having ties with mob boss Marco Sanzionare. Right now, the only man who can clear Tim’s good name is Sanzionare’s financial advisor, John Murtaugh, who’s been caught red handed by the authorities and is willing to squeal for absolution. 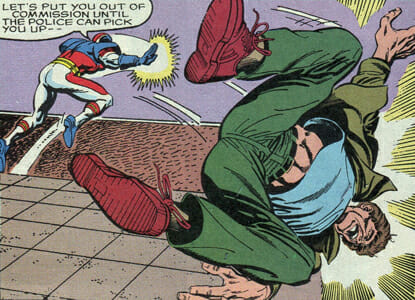 SuperPro takes out one sniper

A rooftop sniper in Sanzionare’s employ prepares to kill Murtaugh, but SuperPro foils his plans and takes him down. However, Murtaugh still dies at the hands of a second gunman. SuperPro chases after the second gunman’s car, but it gets away. Spider-Man just happens to be nearby and witnesses all of this, and lends a hand by hitting the gunman’s car with a spider tracer. 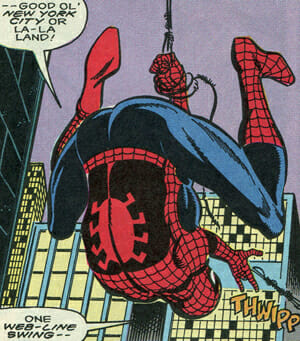 The next day, Pressman makes a public appearance and gets in the sights of another rooftop sniper (the second gunman from before). This time, Spider-Man stops the shooting, and the gunman falls to his death while trying to escape. 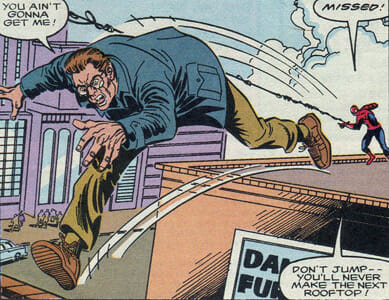 The gunman escapes…to his death

At night, Spider-Man follows his spider tracer to Sanzionare’s mansion and sees a car leaving the driveway. The car, full of Sanzionare’s assassins, heads to Pressman’s house with murderous intent. SuperPro arrives and beats them all up. Pressman’s life is saved, but his name still needs to be cleared… 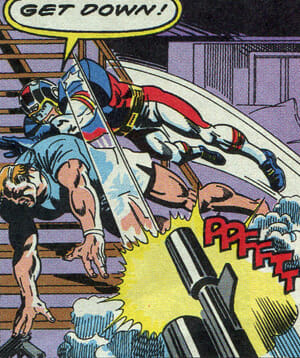 This was bad. Not fun bad, but boring bad. The characters were bland, and I just didn’t care about Pressman’s name being cleared. Maybe if we actually saw what Pressman meant to Phil in a flashback, I’d be more inclined to care, but as it is, all of Phil’s motivation is summed up in a short dialogue: “I knew him from my days in the NFL…he wouldn’t get involved with gamblers.” That’s it. 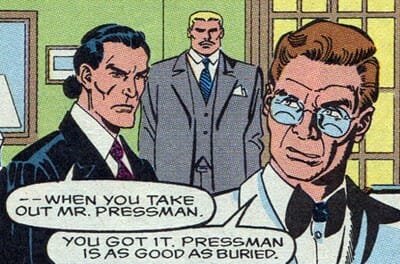 Spider-Man guest stars, but more or less does his own thing instead of actually teaming up with and interacting with SuperPro, though the two of them have similar goals of stopping the assassins. Spider-Man steals the show, and I wanted him to be the star instead of SuperPro.

SuperPro is so ridiculous, but is played totally straight. Maybe if the comic was a bit more self aware, it would have been better received. But then again, who cares? It’s not like this was meant to be a work of significant literature. The writer admits he only wrote the comic to get free NFL tickets. 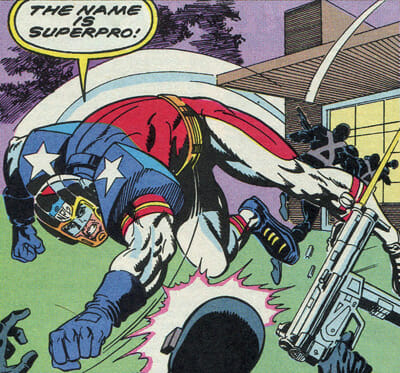 In case you forgot his name

Worth noting is that this “first” issue is actually the second issue. The real first issue, with SuperPro’s origin story, is NFL SuperPro Special Edition #1. I didn’t know this when I read this issue #1. Now I know. And now you know.