In this first story, giant alien insects attack Metropolis and prove to be too much for Superman to handle. He heads to the Fortress of Solitude to come up with a plan, and theorizes that because the insects are so strong, they must be from Krypton. 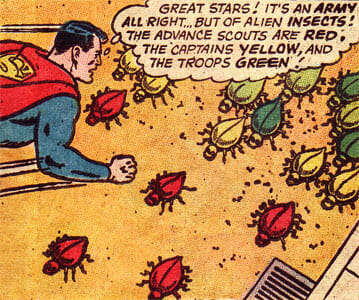 Superman observes a group of insects

But that theory goes out window when the army drops all the Kryptonite in the world (!) on the insects and they survive unscathed.

The insects survive a trip to the sun

Superman finds a spheroid alien spacecraft and gets inside because…why not? It automatically launches and takes him to the planet Giantia. There, he meets a group of aliens – survivors of a plague that wiped out their world’s population. After what they had to endure, they became a little unhinged, so now they’re death worshipers! 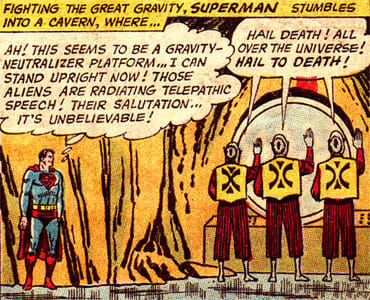 The aliens’ goal is to send the giant insects to 100 worlds and cause mass chaos, destruction, and death. Insects have gone to 99 worlds, so the worshipers only have one more left to destroy: Giantia itself. Superman escapes in the spheroid spaceship just as the aliens pull a “world-wrecking” switch and the planet explodes.

Debris from Giantia streaks across Earth’s surface (yes, it only took like 5 minutes for it to reach Earth). The Giantite meteors have the same effect on the insects as Kryptonite does to Superman, and they all die.

The Secret of Supergirl’s Suitor

The second story involves Supergirl falling in love with a guy named Al. Really super-obsessed in love with him. Even when he steals something and gets busted by Superman, she pays his bail by diving into the Earth and collecting gold. Even when a fish guy (not Aquaman) proposes marriage to Supergirl out of the blue, she doesn’t accept because of her feelings for Al.

Supergirl bails Al out of jail

Suddenly, a fire breaks out in Al’s apartment in Metropolis. Supergirl rescues him, but he suffers fatal burns.

Supergirl saves Al from a fire

On his deathbed he gives his backstory that he’s really a synthetic man from Argo City (her home) used as a test subject to see if Argonians could be evacuated into another dimension. A “freak accident” freed Al from the dimension and brought him to Earth. And the reason Supergirl felt so drawn to him was because he was made to look like the beloved doll-robot that she grew up with. Okay.

Both of these stories were pretty weak with incredibly fast resolutions. However, that doesn’t necessarily mean they’re bad. The fun and campiness of these stories make up for some of their failings. 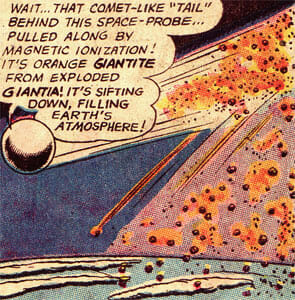 The remains of Giantia rain down on Earth

But not all. The biggest flaw of both these stories is that they’re essentially meaningless. In the first one, Superman did absolutely nothing substantial. If he just spent the whole time in the Fortress of Solitude eating popcorn and watching I Love Lucy reruns on tv, the story would play out the same way: Giantia would have still exploded and killed all the insects.

Kinda sucks about the 98 other worlds that are infested by the insects, though, unless the Giantite reached them as well. 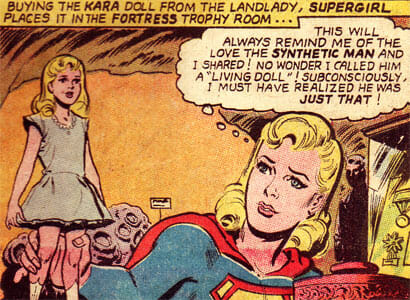 Supergirl leaves the story with a memento

The second story is just as pointless; it’s all about the mystery of Al, and when we finally find out who he is, he dies. But unlike the first story, it was more entertaining, in a melodramatic, soap opera kinda of way. Al’s backstory is convoluted as hell and raises more questions than it answers, but that’s why I love it.