Obnoxio the Clown was the mascot for Crazy, Marvel’s humor/satire magazine not unlike Mad, which lasted from 1973 to 1983. Obnoxio was a disheveled, cigar-puffing clown with a cynical, depressing demeanor; in my mind, he sounds like a gravely Rodney Dangerfield.

For reason’s unknown, but not altogether unwelcome, Obnoxio was given this oneshot comic book, giving him his color debut. Something Slimey this Way Comes!

It’s Kitty Pryde’s birthday, and Professor Xavier’s hired Obnoxio as an entertainer. A taxi drops off Obnoxio at the front of the X-Mansion, and he makes his way to the front door. At the exact same time, the villainous Eye-Scream has plans to infiltrate the mansion. He’s a mutant with the ability to turn into any flavor of ice cream. Not lying. 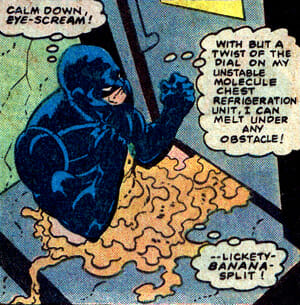 Eye-Scream trips the X-Mansion’s security system, and the X-Men assume Obnoxio is the intruder. He falls down a trapdoor into a holding cell but manages to escapeby jamming CO2 cartridges into some air conditioning intakes to blow open a hole.

On the other side of the cell, Obnoxio meets the X-Men and gets in a fight; he surprisingly holds his own, using a super-charged hand-buzzer to shock Colossus, and throwing sneeze powder at Nightcrawler. 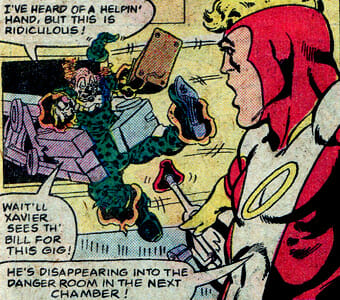 Obnoxio gets pulled into the Danger Room

A robotic arm grabs Obnoxio and pulls him into the Danger Room, where he contends with its deadly traps and obstacles, before breaking out. Eye-Scream is revealed to have been at the Danger Room controls but is now frozen thanks to Professor Xavier lowering the temperature to below freezing.

Professor Xavier explains to the X-Men that Eye-Scream was the real intruder, and that Obnoxio is a guest. Sick and tired of it all, Obnoxio leaves. 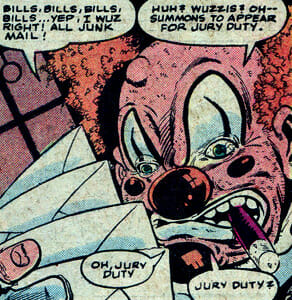 Jury Duty! or Oy the Jury

The next story in the comic has Obnoxio going home to his dilapidated apartment and finding he received a jury duty summons in the mail. He grudgingly heads over to the city’s criminal courts building and spots some strange-looking men stealing mannequins from an evidence room. Obnoxio chases the men through the building, until they’re finally caught outside by the police.

The mayor of the city shows up for a press conference on the attempted robbery, and Obnoxio forces him to sign a card excusing him from jury duty. 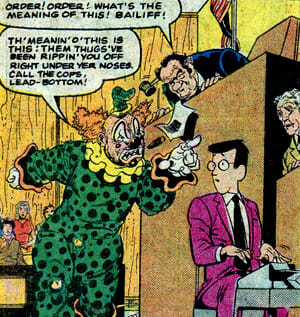 Obnoxio barges through the courtroom

Pretty amusing. Strange that, since this was to be Obnoxio’s only comic offering, the X-Men, of all people, are guest starring for half of it. But that’s fine – the X-Men story was the comic’s strongest part, and I really liked Eye-Scream. What a hilarious idea for a villain; I think this is his only appearance ever. Would love to see him again. He’d be perfect in The Unbeatable Squirrel Girl.

In comparison, the second story was barely okay. There’s nothing much to say about it. It just…happened. It was bland. 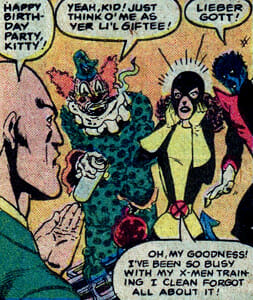 The conclusion of the X-Men story

Obnoxio, as a character, shines with his witty commentary and self-deprecating humor. On the first page alone, he breaks the fourth wall, calling this comic “brain-expandin’ literature.” Then on the bottom of the page, asks: “Think this comic will end up in the Library of Congress?” That was cute.

But I can see why this was only a oneshot. I like Obnoxio, but he doesn’t really work well as a lead; he seems best in small doses.

Entertaining, but the jury duty story weighs it down. 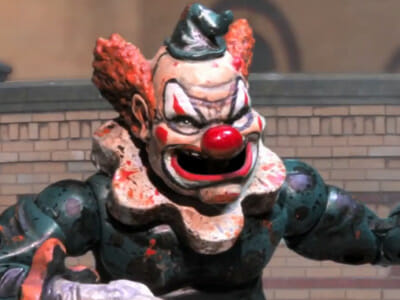 While Obnoxio has more or less disappeared into obscurity since the 80s, he has popped up from time to time since then. I’m tickled to discover an Obnoxio HeroClix figure was made recently, with the skills and abilities he demonstrated in this comic.

He also showed up in one of Marvel’s What The–?! online shorts in what could be considered a sequel to this comic’s X-Men story.