Bongo Superheroes is a part of Bongo Comics’ Radioactive Man series, which is a spinoff of The Simpsons. More specifically, one might say it’s an in-universe Simpsons comic.

Content-wise, Bongo’s Radioactive Man comics are replete with satire and parodies of other comic book heroes. This issue contains four stories featuring the Superior Squad, a parody of superhero teams like the Avengers and the Justice League. 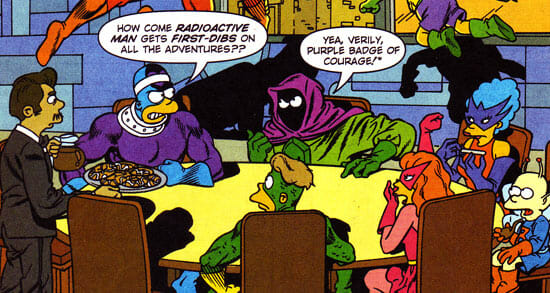 Risky Be the Rumpus Room

After Radioactive Man and Fallout Boy are summoned away by the Atomo Signal, the remaining Superior Squad members visit The Rumpus Room (parody of the X-Men’s Danger Room) for training.

There’s something off about Javier…

Things go awry when the Superior Squad’s new butler, Javier, pushes the room’s difficulty level all the way to 10. For you see, Javier is really the villainous Brain-O, the Bionic Law-Breaker, in disguise.

“Why, you fraud! You’re not Latin at all!” says Bug Boy, “Actually, I am. Some parts were manufactured in Mexico City,” says Brain-O. 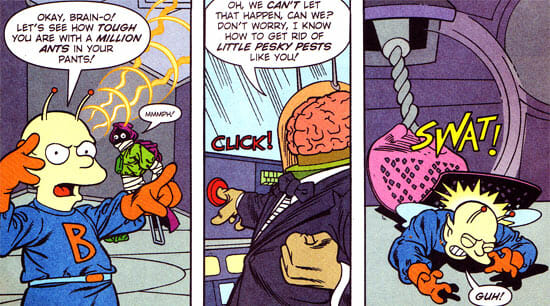 The room’s high difficulty setting creates challenges too intense for the heroes to handle, and they’re quickly incapacitated. That is, until they cut a hole out of the Rumpus Room’s glass window to punch Brain-O’s head off his body and into the hands of a rowdy teenager.

Bug Boy gets out of playing Truth or Dare

The Secret Origin of Bug Boy

In his secret lab, Bug Boy tells a couple mosquitoes (that he taught English in just three hours) his origin story: while his 350 IQ makes him a genius by Earth standards, on his planet, 350 was considered low.

His specialty was transmuting vegetables into chocolate; as he headed to Earth to transmute “The World’s Largest Potato,” the exhaust from his spaceship was so powerful that it obliterated his home planet. Whoops.

A Shrimp in Time Pays Fine

While on an undersea patrol, Captain Squid finds and eats a couple talking sea monkeys. A whole gang of sea monkeys show up to fight him back, but their queen allows him to continue eating: “Every day I drop a litter of the little brats and they just hang around the house yakking their heads off.”

Later, we see Captain Squid’s solution to this sea monkey overpopulation problem – selling them to children.

The Grotesque Garage Sale of Gargamash!

We start this story in Plasmo’s (Doctor Strange parody) front yard, which looks suspiciously like the Simpson’s front yard. He checks out his neighbor’s yard sale and finds a powerful mystic artifact: The Baster of Bastur. 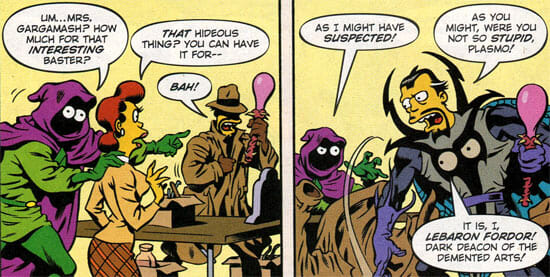 Plasmo finds The Baster of Bastur

Plasmo’s arch enemy Lebaron Fordor (Baron Mordo parody) snatches the Baster and uses it to open a gateway to the Nether World. A denizen of this dimension, the Fearful Flamammu (Dormammu parody) takes the Baster, then warps the quarreling pair back to the yard sale.

A very amusing comic with fun, witty humor. Comic fans will love the superhero gags and parodies, and catching some of the more subtle references. At the same time, non-comic fans (who may become comic fans after reading this issue) will still find plenty of entertainment from this issue.

The Secret Origin of Bug Boy was the strongest story, but Rumpus Room isn’t far behind. Gargamash is just okay, though Plasmo himself is a pretty fun character, and A Shrimp in Time Pays Fine is the weakest – the ending punchline isn’t funny enough to justify an entire story (even if it is a short story).

I was disappointed to find that this was the only issue of Bongo Superheroes ever made. The issue numbers of Bongo’s Radioactive Man series aren’t sequential, and are sometimes given long, arbitrary numbers to give the illusion that it’s a series as long-running as Marvel and DC’s greats. Which, come to think of it, is pretty funny.