Cartoon Network Starring was an anthology series published by DC in the late ’90s and early ’00s. Each issue focused on a different Cartoon Network cartoon, from the The Powerpuff Girls to Johnny Bravo. This particular issue stars our good friend Space Ghost.

We begin with a scene of Space Ghost going over vacation sides with Zorak and Moltar. An old slide showing Space Ghost fighting Zorak pops up, seguing into Space Ghost telling the tale of their first encounter.

The Hunters look so delightfully 1950s

Space Ghost visits his mentor, Space Hunter, tasked with babysitting his twin children Jan and Jace while he goes out on a date with his wife.

Zorak an co. kidnap the Hunters

Almost immediately after Hunter and his wife step outside, they’re kidnapped by Zorak and taken to his secret lair. 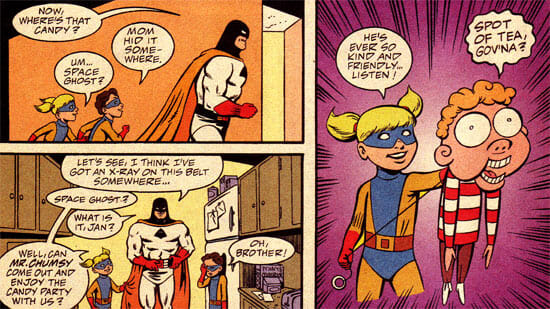 While Space Ghost tries to entertain the twins by feeding them candy, Zorak starts broadcasting his voice through a speaker embedded in Jan’s favorite doll, Mr. Chumsy. 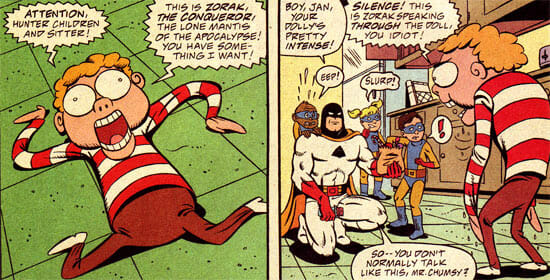 Zorak explains that Mr. and Mrs. Hunter are his hostages, but he’s willing to exchange them for a universe-obliterating orb they happen to have in their living room. 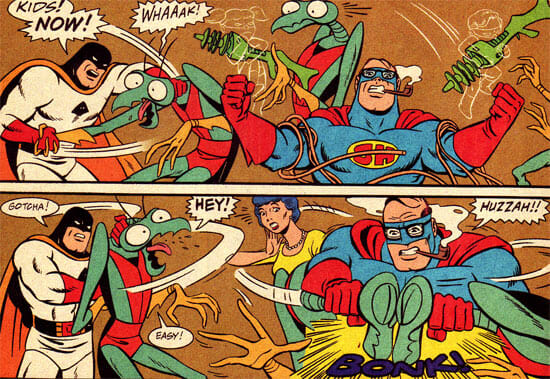 Space Ghost accidentally breaks the orb but heads over to Zorak’s Lair anyway; with the twins’ help, he frees the hostages and apprehends Zorak.

An excerpt from Brak’s comic

We return to the present, and Brak shows up with a crude comic he draw. Pretty fun stuff; like the kind of segment he’d have on Cartoon Planet.

This comic was written by Space Ghost Coast to Coast writer Andy Merrill (aka Brak), and C. Marin Croker (aka Zorak/Moltar) was also on board as co-artist, so it definitely had the fun flavor of the show. Highly recommended for goofy superhero fun and irreverent humor.