Phil’s niece is kicked off the middle school football team and Instant Replay returns…out for revenge!

Phil visits his sister and finds that her daughter (his niece) Melanie is upset because she was kicked off her middle school football team. The board of education decreed that only boys should play, but Phil tells her to protest because nothing should keep her from following her dreams.

Phil arrives to talk some sense into Melanie’s coach

Phil heads over to the middle school during football practice to have a chat with the coach, but Instant Replay shows up. He’s been floating around time and space since he got electrocuted by golf clubs in issue 3. He’s gone crazy, talking like Yoda now, and wants to get revenge on SuperPro/Phil. 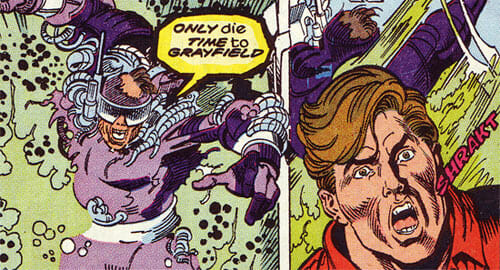 Phil escorts the coach and the players to safety, then changes into his SuperPro costume (which he brought along with him, of course).

Instant Replay has the upper hand in the fight, considering he can teleport and SuperPro…can’t. Melanie shows up and throws a football at Instant Replay as a distraction, allowing SuperPro to punch him into an electrical transformer, killing him. 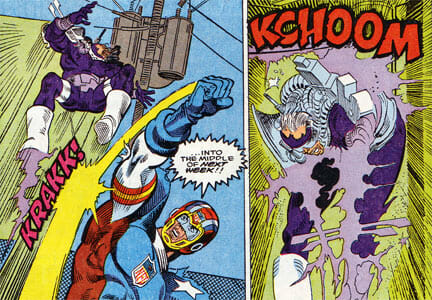 In the final scene we see that everything worked out for Melanie and she’s back on the football team. In the fight with Instant Replay, she figured out that SuperPro is her Uncle Phil and thought that if he can get horribly injured (many times) and come back as a superhero, then she can do anything she wants. Literally anything. Like if she wants ice cream for dinner, she’ll make it happen – nothing will stop her.

Melanie is back on the team!

Not the worst thing ever, but the Melanie plot could have had a stronger resolution. The message should have been (and I thought it was leading to this) that you should always fight for your dreams, no matter what. But instead, the message ends up being “have a famous sports reporter uncle who can solve all your problems for you.” What we should have gotten was Phil and Melanie crashing a board of education meeting so she can deliver a long, heartfelt speech to change their minds.

The whole Instant Replay plot feels tacked on, but of course it’s needed because without it, SuperPro wouldn’t have a reason to show up.