SuperPro tussles with a gang led by his partner’s nephew then fights a ninja-looking guy with teleportation powers. 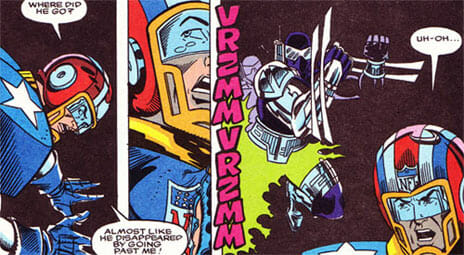 We’re introduced to Instant Replay (who looks a bit like Snake Eyes from G.I.-Joe) as he demonstrates his special speed/time powers in a fight against SuperPro; he wins and SuperPro is killed. But of course this isn’t the real SuperPro, but a lifelike android created by Sanzionare. I love that it was programmed to make quips like the real SuperPro because it sure didn’t need to. Phil and Ken investigate a string of recent violence perpetrated by a group of masked men who film themselves beating up and robbing Eagles fans (or people who wear Eagles t-shirts, at least). 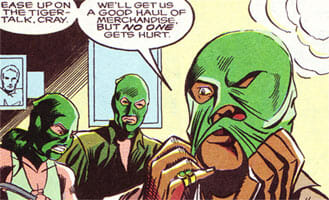 Ken goes out in his Sports Inside van, now disguised as an Eagles van, and acts as bait to lure out the masked gang. SuperPro shows up to fight them off, but the gang ends up running away. Instant Replay watches from the shadows. 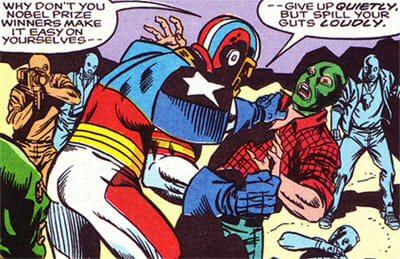 The next day, Ken visits his sister’s house. He recognized the leader of the masked gang – it’s his nephew, Ronnie! He goes to his room for a chat; Ronnie explains that he hates the Eagles because they didn’t let him on their team, and now he wants revenge. Ken thinks that’s dumb and tells Ronnie to turn himself in, but Ronnie says no. 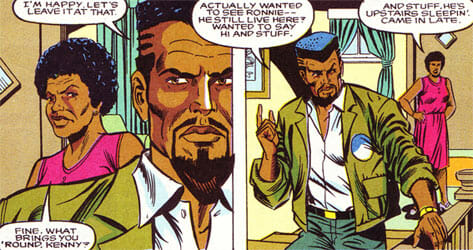 Ken visits his sister and nephew

That night, SuperPro surveys a storefront damaged from an Anti-Eagles gang attack. He talks to a couple police officers about it, and Ken shows up ready to give Ronnie’s name, but is interrupted by Instant Replay. 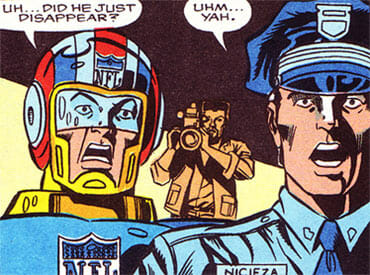 Nearby, Ronnie’s gang robs a mom and her sons. Ronnie stresses to his gang not to use violence, but they don’t listen; he protects the boys from the gang, then runs back home so he can turn himself in to the authorities.

Ronnie saves the boys and breaks up the gang

Three weeks later at an estate in the Swiss Alps, Sanzionare replays video footage of SuperPro and gets really, really angry. He whips out some Cylon-looking power armor that he’ll wear in the next issue so he can fight SuperPro himself. 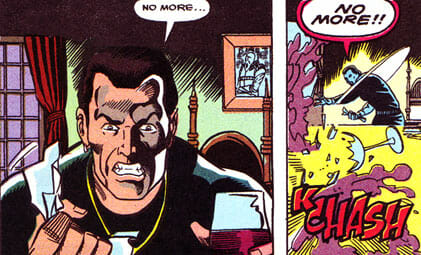 Slightly better than the last two issues. Instant Replay is probably the most interesting enemy we’ve seen so far (not that that’s saying much), but he didn’t last long and was defeated serendipitously. The real story of this issue was about the Anti-Eagles gang, and it was dumb, but fun dumb. The gang leader having a connection with Ken was a nice touch, allowing us to see more of Ken’s background, even if the end scene of Ronnie making the decision to take responsibility for his actions came across as too preachy.