As I reviewed issue #1 of SuperPro I learned that the real first issue of the series is SuperPro Special #1. It’s a slightly larger than average issue (with no ads!) broken into three chapters: 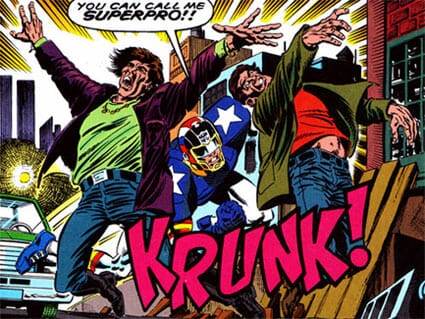 Do people still say “krunk“? Asking for a friend

SuperPro investigates an illegal steroid production ring. He spies on some dudes loading boxes who have no idea what’s inside. “Could be some sorta chemical stuff,” one of them says, “blow up in our faces!”

SuperPro makes his grand entrance: “Gentlemen, I’d recommend you worry about something else blowing up in your face…like my fist!” Nice one. 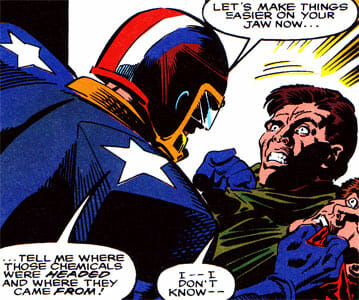 He beats them all up then grabs one goon to ask him where the chemicals came from and where they were going, but the guy has no idea. The cops arrive. Cue SuperPro’s exit. 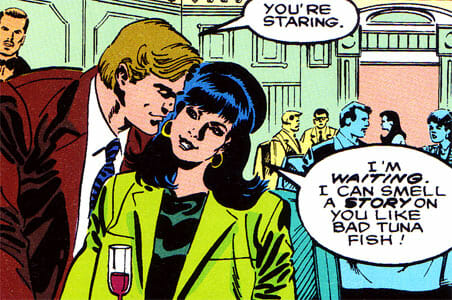 Phil meets with his girlfriend Jane

SuperPro changes to his civilian identity of mild-manner sports journalist, Phillip Grayfield. He heads to a restaurant for a date with his girlfriend Jane; he’s 40 minutes late but she forgives him. What a nice relationship they have. 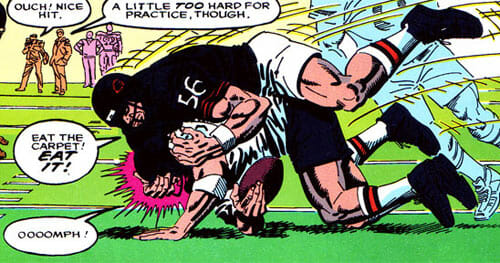 I can’t eat carpet without condiments

Later at a stadium, we’re introduced to Ken Reid, Phil’s cameraman. He and Phil take an interest in a bulky aggressive rookie player named Carl Bennings. They watch Carl get steroids from some guy (later identified as a Professor Morrison), who has a connection with a pharmaceutical firm. 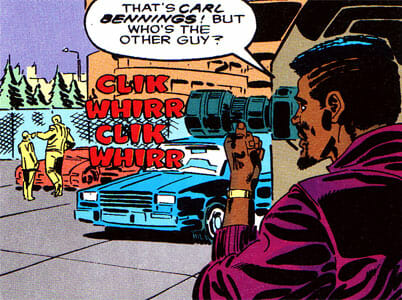 Phil dons his SuperPro outfit and breaks into the pharmaceutical company building. He sees Morrison with a couple lab guys doing something, but they’re too far away for him to hear. “Wish I’d gotten enhanced senses as well as speed, strength, and stamina!” SuperPro then accesses a nearby computer but finds zilch. 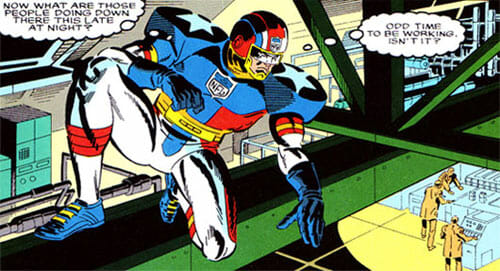 SuperPro sneaks into the building

SuperPro (now Phil again) heads back to Ken to report his lack of findings, but Ken is like, “by the way, I figured out you’re SuperPro.” 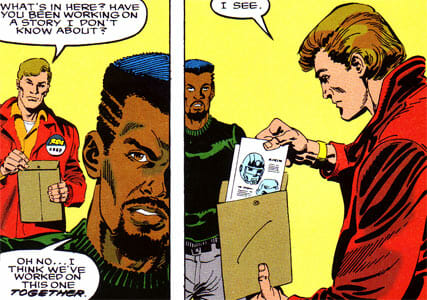 You are busted, buddy

Phil tells his origin story to Ken: After graduating with top honors from Notre Dame with a double major in journalism and criminal justice, not to mention being a super awesome linebacker, Phil joins a rookie football training camp. But on his first day, he tears cartilage in his knee and has to be in rehab for a year.

Then after finally finishing the camp, he breaks his femur in his first exhibition game! Out another year. Phil is finally able to join a pro team, but he gets injured saving his friend’s kid from a nasty fall. He will never play again. 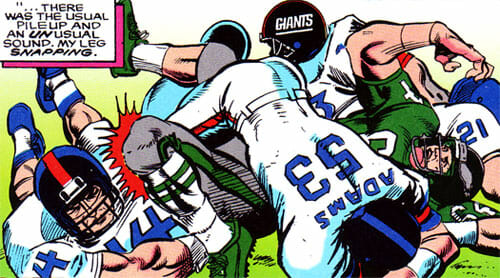 Phil has the worst luck

The kid he saved and the dad (named Ron and Jeremy…coincidence?) visit Phil in the hospital and hook him up with a job as a sports journalist. His first assignment is to interview a super reclusive football collector, who shows Phil his prized possession: a super football suit made out of super stuff.

Suddenly some asshole robber guys show up. They tie up Phil, steal all his stuff, then set the house on fire. Chemicals and plastic shit rain down on Phil, making him super strong or something; he puts on the super football suit and stops the robbers. The collector guy lets Phil keep the suit, and thus SuperPro is born.

Phil gets his super powers

Philip and Ken barge into New Jersey State University, camera rolling, and accuse Professor Morrison of making the illegal drugs. He confesses to everything: 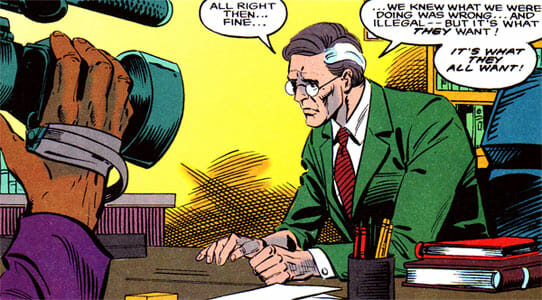 The final stage of the drug was supposed to “allow for a marked increase in reflexive action and physical strength,” and Carl Bennings was due for his last dose! 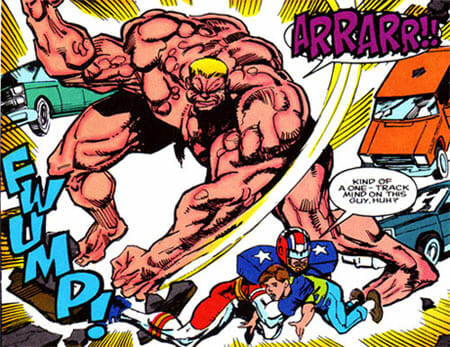 Phil and Ken race to Carl’s place, but its too late. He takes the drug and turns into a huge lumpy monster. SuperPro is able to hold his own against him, but the strain is too much for Monster Carl and he succumbs to a heart attack and dies.

Carl’s friends get rid of their drugs

Later, in the final scene of the issue, Phil and his girlfriend eat bagels and watch tv. 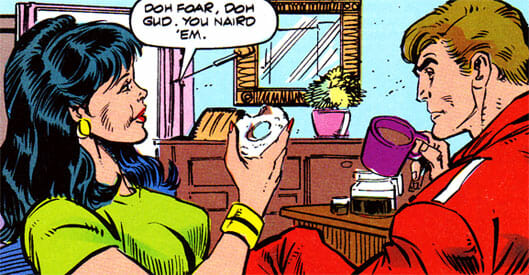 Of course this was pretty dumb, like a kid wrote it, using kid logic. How exactly did all that melted plastic and weird chemicals give Phil his superpowers? I will give the writer points for not going the clichéd route of having Phil get his powers from radiation. SuperPro is better than that, at least. 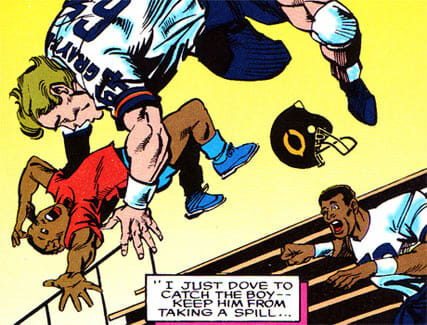 Phil saves Jeremy at the cost of another injury But on the whole, I’m surprised I enjoyed this comic more than SuperPro #1. It’s dumb, but it’s fun dumb with the tone of a cheesy afterschool special (given the topic of steroid abuse). Fortunately it’s not as preachy as Captain America Goes to War Against Drugs! 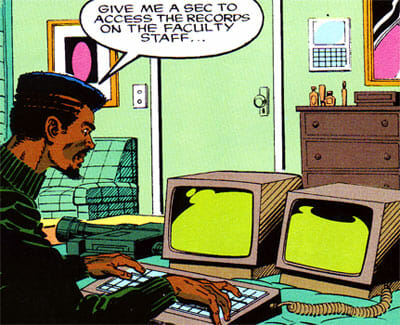 One thing I appreciated about this comic was that it was accessible to non-sporty people like myself. It is at its heart a superhero story. Though I will say that when a few football characters popped up in the story, I had to google their names to see if they were real people and if I was supposed to know them. But no, they weren’t. They were only fictional characters. 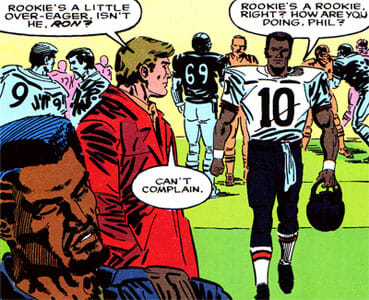 Phil meets up with his friend Ron

And on a final note, the cover looks pretty nifty and I like it.