Phil heads to Brazil to interview a soccer player and fights a man covered in buzzsaws.

Phil and Ken watch the game

In Maracanã Stadium in Rio de Janeiro, a football (soccer) match commences between Brazil and Argentina. Phil and Ken are here getting video footage of one of the Brazilian players, Claudio Juarez, for one of their Sports Inside segments.

Claudio wins the game and audience members get riled up and start acting violent. Phil quickly changes into his SuperPro costume and puts an end to fighting by moving a wall between both groups of fans.

Ken and Phil later meet up with Claudio in Amapá, which is where he wants his interview filmed. His lady friend Felicita drives the group through a tropical rain forest, and Claudio gives a speech about how loggers are tearing it up. 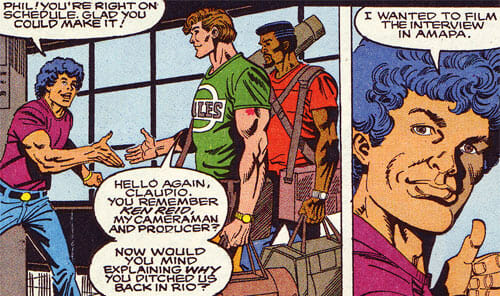 Phil and Keen meet up with Claudio

However, people belonging to a group known as the Protectors of the Forest are doing what they can to save it, and chain themselves to trees to prevent them from being cut down. 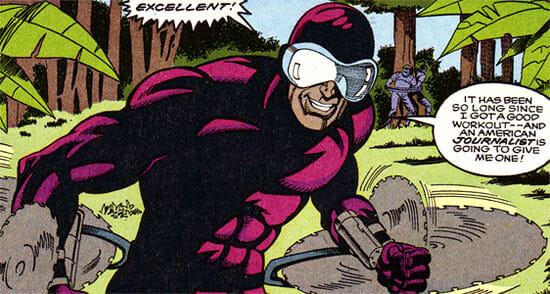 A man covered in buzz saws – Ripsaw – arrives. He was hired by a logging company to intimidate/kill the environmentalists. He destroys Ken’s camera, then Phil once again gets in his SuperPro cotume, and just wails on Ripsaw; Claudio rams his jeep into Ripsaw and the threat is over. 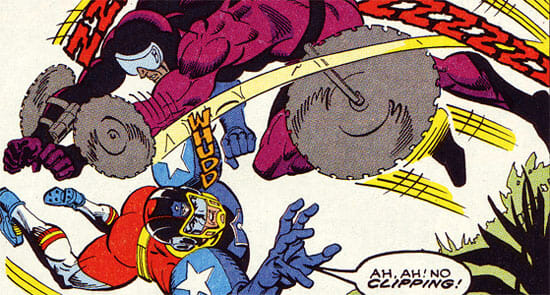 Yet another issue that felt like a Captain Planet episode, only this one had a bad guy covered in saws. The story was a bit too preachy, of course, even if it did have its heart in the right place. A comic book about a football superhero does seem like a strange place to bring up environmentalism, but I suppose it’s as good a place as any.

Making its debut at the end of this issue is the SuperPro letters column where readers could submit questions and comments about the comic:

“NFL SUPERPRO is one of the most refreshing and exciting comics of 1991. I hope SUPERPRO is around for a long time to come.”

“Thanks for a clever new action comic…The premise is original and should stay fun for awhile.”