The Mister T cartoon was one of the many detective cartoons that came out in the wake of Scooby-Doo‘s success. This one follows Mr. T and a group of young gymnasts who solve mysteries together.

Yes, that Mr. T. He shows up in short, live action segments that bookend each episode: “today we’re going to learn about X” at the beginning and “today we learned about X” at the end. Pretty simple stuff, but he says it in his trademark Mr. T style, so they’re pretty fun to watch. 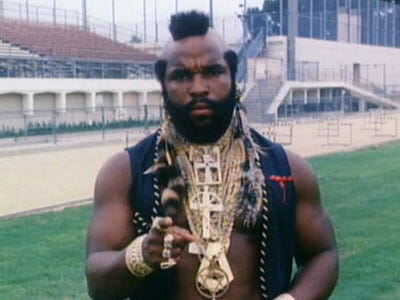 The leader of the group. Actually voiced by Mr. T and not a sound-alike.

The only other adult in the group.

A pompous jerk. Looks and sounds a bit like Stormy from Sealab 2021.

The brains to Jeff’s brawn. Voiced by Phil Lamarr in his first role!

A dog – not a talking dog, mind you, but he does have a mohawk.

Mister T ran in the late ’80s and lasted 30 episodes. At one point, Adult Swim aired reruns at 2 am, which is where I first saw the show and briefly became obsessed with it. 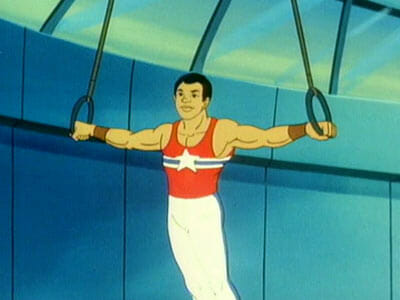 Woody at a gymnastics competition

We begin our story at a gymnastics competition, where Woody (the newest member of Mr. T’s mystery-solving gymnast squad) kicks a lot of ass and wins first place. 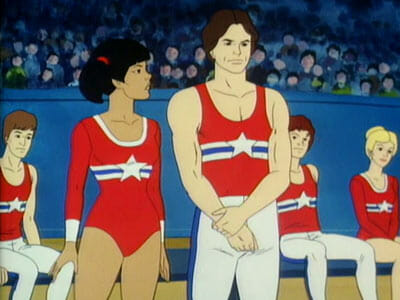 Unfortunately, he is unable to receive his gold medal because a group of assholes are going around town smashing all the medals they can find. Spike witnesses these guys destroying some medals outside and they kidnap him. 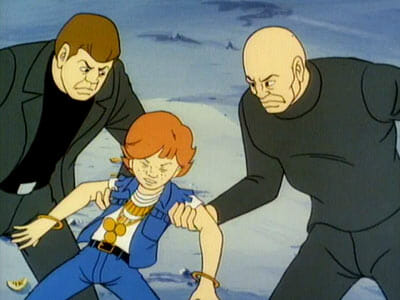 Another Set of Medals

The rest of the Mr. T team investigates the scene of Spike’s disappearance, and Woody finds a piece of paper left behind with local addresses of medal locations. 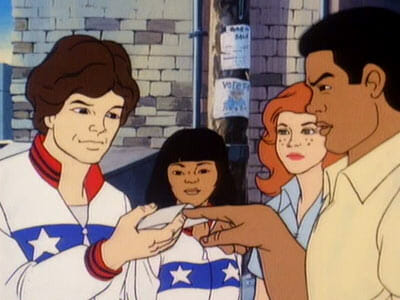 The gang spends the majority of the episode chasing after the assholes, as they smash medals at several locations (including a castle and a restaurant). At the same time, the team also learns to work with and trust Woody, culminating in their acceptance of him. 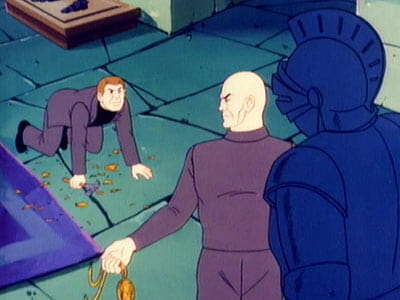 The assholes in a castle

Mr. T and co. end up in a factory belonging to a trophy company. The owner is all tied up and explains to Mr. T that the asshole guys are looking for a microfilm that somehow ended up inside a medal. I forgot how; I was distracted by the fact that the owner looks like Patrick Stewart. 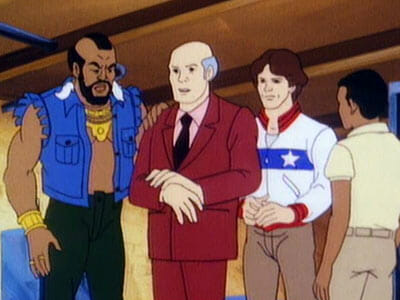 The assholes finally find their precious microfilm, but Mr. T and the others catch up to them and kick asshole ass. Spike is rescued from an arcade (the assholes’ base of operations), and we learn that the microfilm had stolen plans for a new video game. 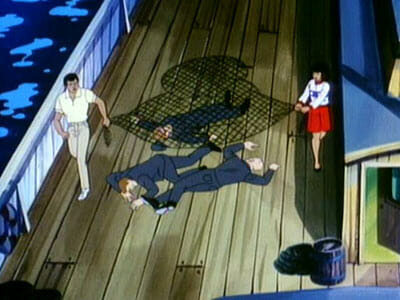 With gymnastics you can do anything

In the closing live action segment, Mr. T says that it’s cool if you have friends, but it’s even cooler to have more friends. 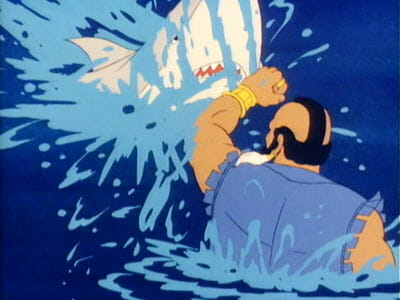 Yeah, it’s awful, but it’s a fun kind of awful with some outrageous moments sprinkled in, like Mr. T punching a shark. Definitely one of the more memorable celebrity tie-in cartoons; the premise is incredibly strange – gymnasts solving mysteries? And just how did Mr. T become their coach? Does he know anything about gymnastics? 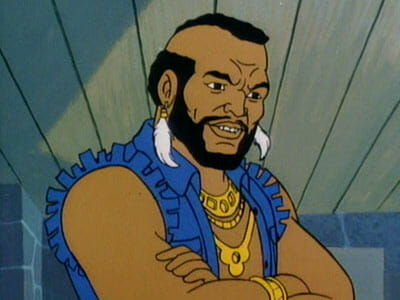 Mr. T makes an unconventional, but interesting, lead and each of the other characters have their own little quirks that make them entertaining, but borderline obnoxious (or straight-on obnoxious in Spike’s case). My favorite part of the show is definitely the theme song/opening sequence, which is chock-full of weird Mr. T smiles!

Mister T is something you need to be in the mood for, so it’s probably best to watch on a Saturday or Sunday morning at 2 am after a viewing of Gymkata.