Yogi Bear is probably Hanna Barbera’s most famous of its anthropomorphized animal characters. Remember the live action movie that came out a couple years ago? Me neither. But pretty much every episode/segment involves Yogi Bear trying to use his wits to steal picnic baskets from park goers, while Ranger Smith tries to stop him. Yogi’s sidekick Boo Boo usually factors in, acting as Yogi’s conscience, but Yogi never listens to him. 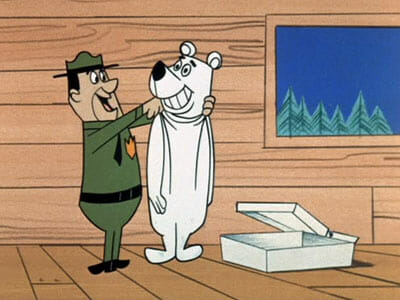 The new holiday season is starting and Mr. Ranger has a plan to keep Yogi at bay: dressing up in a polar bear costume (the only one in the shop) to reinforce the rules. He stands over Yogi and Boo Boo as they awaken and goes over the park rules with them. They just think he’s plain weird, but Smith is confident his plan is working. “An animal’s intellect can never compete with the brain of a smart human,” he says upon exiting Yogi’s cave. 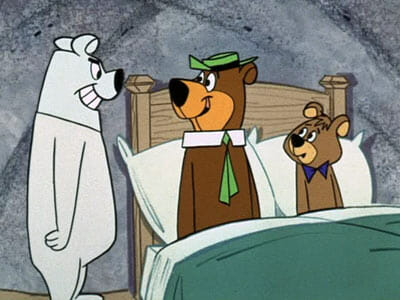 Smith gets hot in the costume so he takes off the head piece for a breather, but Boo Boo catches a glimpse of him and believes the “polar bear” ate Ranger Smith. Yogi – smarter than the average bear – knows what’s up. 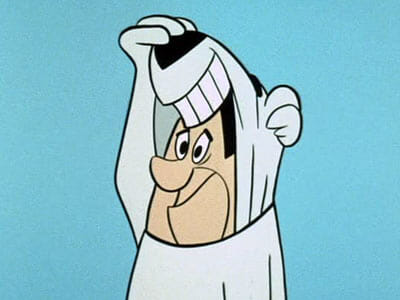 Ranger Smith sets out a picnic basket to see if Yogi will try to steal it, but he gets all theatrical, as if resisting it is the hardest thing he’s ever done, and collapses. Smith runs to his side and takes off the costume, explaining he was testing Yogi. “Did I pass, sir?” “With flying colors!” 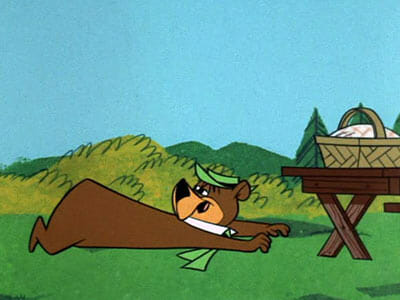 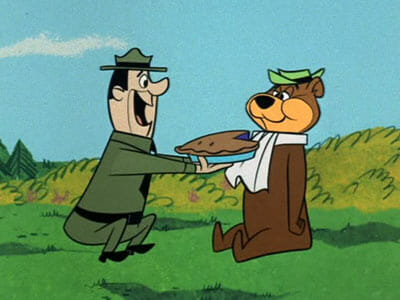 You don’t see this every day

Not bad. There were some cute gags, and I especially liked how Yogi and Boo Boo kept making fun of how the polar bear never moved his mouth when he talked. But my favorite gag was Ranger Smith’s boss wearing a badge while in bed: 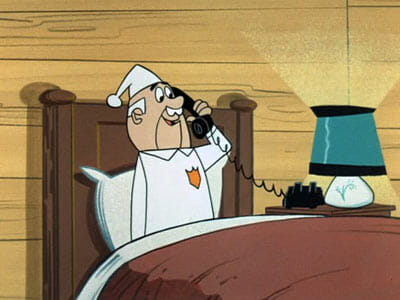 Just look at it!

As with Pixie and Dixie and Mr. Jinks, I think the mannerisms and performance of the lead voice actor coupled with snappy dialogue elevates the entertainment level of this episode.