Pixie and Dixie and Mr. Jinks was pretty much a clone of Tom and Jerry, but made on a tighter budget. Instead of one mouse, there were two (Pixie and Dixie), and all the animals could talk, allowing for more verbal sparring. 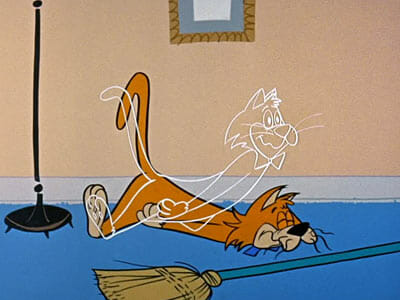 The episode begins with what I’m sure is a typical beginning for these shorts, with Mr. Jinks chasing after Pixie and Dixie: “I’m so vicious today, I scare myself,” says Mr. Jinks to the audience, breaking the fourth wall shortly before he collides with a desk, breaking his head. His spirit escapes his body and floats into the sky, where a bodiless voice (who kinda-sorta reminds me of Patrick Macnee) must decide whether Jinks’ spirit will go to Heaven or Hell. Because Jinks has treated the mice badly, there’s a good chance he’ll go to Hell, but the voice decides to send Jinks back to the living plane for one last chance to make amends. All he has to do is be nice to them. Easy, right? 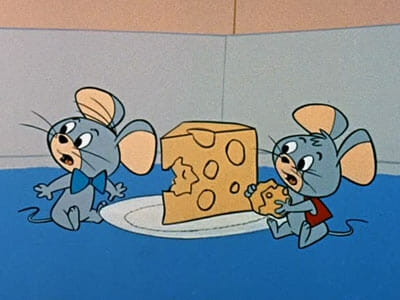 Pixie and Dixie notice something wrong with Jinks

Jinks’ spirit returns to his body and he acts extra nice to the pair of mice, letting them do whatever they want to him, like riding him as a horse. A tough-talkin’ dog watches through the window with surprise and calls over over Jinks, telling him he should feel ashamed of himself for allowing the mice treat him so badly. 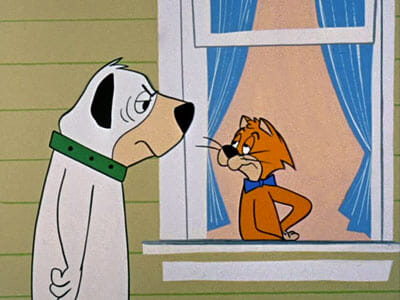 Mr. Jinks starts having second thoughts about being nice before the voice reminds him of his task, and he must endure more abuse at the hands of the mice, playing William Tell, and even the dog gets in on some of rough play. Jinks’ time runs out and his spirit floats back up, where the voice admits he forgot cats have 9 lives and sends Jinks back down. Jinks grabs a plunger and chases after the mice for revenge, but hits his head on the same desk and loses another life; “It’s okay,” he says, “I’ve got like 7 left.” The ominous voice forgets that Jinks has nine lives

Compared to Tom and Jerry, who actively want to kill each other, Mr. Jinks’ and the two mice have more of a “friendly competition” relationship (albeit one that includes bodily harm). The dog in this episode was a big jerk, though; there’s a fine line between thinking Mr. Jinks should be ashamed of himself and then actively participating in his abuse. 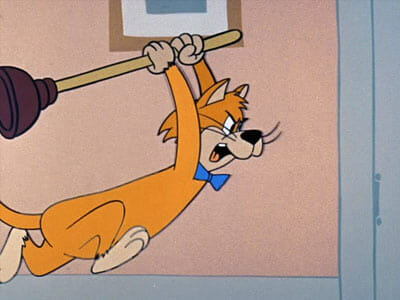 But overall, I actually had a bit of fun watching this one. Having the animals talk was a good decision, as the dialogue and voice acting was the episode’s strongest point. I love Jinks’ quirk of calling the mice “meeces.”