Huckleberry Hound is an anthropomorphized talking blue dog with a Southern accent, and one of the many popular Hanna Barbera animal characters, which includes the likes of Yogi Bear, Wally Gator, and Snagglepuss. Each 7-or-so-minute episode involved Huckleberry in some form of job (farmer, hunter, police officer) attempting to accomplish some sort of goal associated with said job. 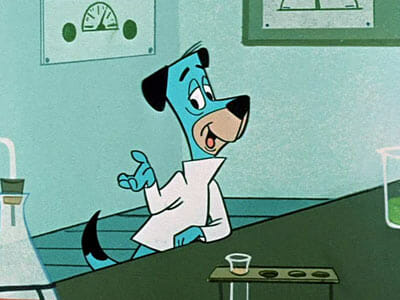 Huckleberry plays a scientist in this episode, which begins with a dedication card: “This picture is respectfully dedicated to the Scientists of Our Country.” A bodiless voice, played by Don Messick (one of Hanna Barbera’s staple voice actors), asks Huckleberry to tell him about “Operation Spud.” 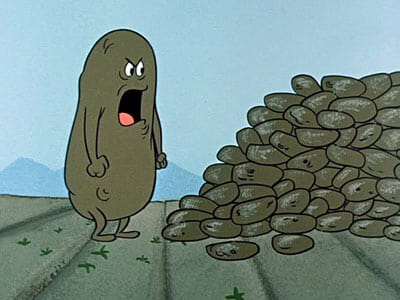 We flashback to a farm in Idaho, where a potato is grown with eyes, limbs, a brain, and most importantly, the ability to will itself to giant-size. Angry with the way people have been treating potatoes, this potato monster starts heads to a city to cause mass panic. Okay, I can accept this turn of events. 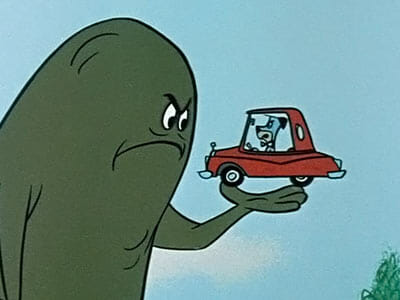 Huck comes face to face with the giant spud

Elsewhere, Huckleberry gets a call from the white house (not THE White House, but the white house next to Schneider’s bakery) that they need his help in capturing the giant potato. Huck goes out and tries various methods…helicopter with rope, etc., but all end in failure and his getting slammed into various chimneys. 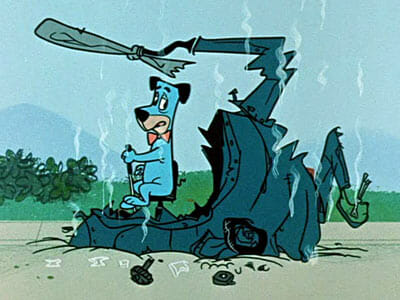 The final solution involves tricking the potato monster into getting into a rocket that immediately takes off and goes into orbit – “spudnik,” Huck jokes. He then explains the rocket just happens to have a random cache of explosives stored inside (really?), which go off, causing potato chips to rain from the sky. Wait, wasn’t Huckleberry supposed to “capture” the monster? Oh well. I’m sure it was delicious. 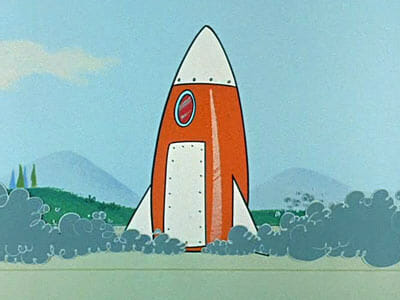 The giant spud is tricked into Huck’s rocket

I never really thought too highly of the Hanna Barbera solo character shorts, as I felt they worked better in groups so they could play off each other (Laff-A-Lympics, Yogi’s Gang, et. al). I do feel more appreciative of Daws Butler‘s voicework for Huckleberry; it’s the type of voice that probably engendered a lot of laughter in the recording studio. 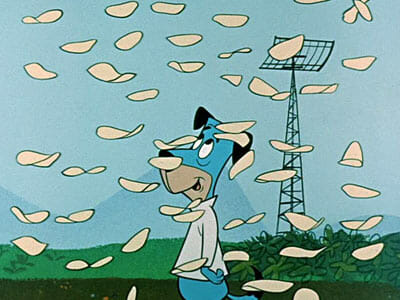 The best kind of rain

It was an okay watch. I enjoyed the fact that this episode was a love letter to 1950s monster movies, and as such, had a bit more of an absurdist plot than the typical Huckleberry Hound episode. Some of the gags were cute, and the episode length was just perfect; however, there was nothing that really made this essential viewing, and I don’t think I could sit through a marathon of these.