Horse! was a graphic novel published by Slave Labor Graphics in 1989. According to the cover, this is book 1 of 3, but I see no evidence that books 2 and 3 exist. Everything about Horse! is shrouded in mystery, as there’s practically no information about it online.

We’re off to a rousing start

We begin in the home of a thief named Christopher Dunn, as he argues with his wife Martha. “You suck! I want a better life,” etc. He storms out and she drinks an entire bottle of vodka.

Christopher tries to sell an ankh

Christopher visits a Mr. Osakada and tries to sell him a gold ankh he stole, but Osakada will only give him $40 for it. A pearl in a glass case catches Christopher’s eye; he later breaks in and steals it. 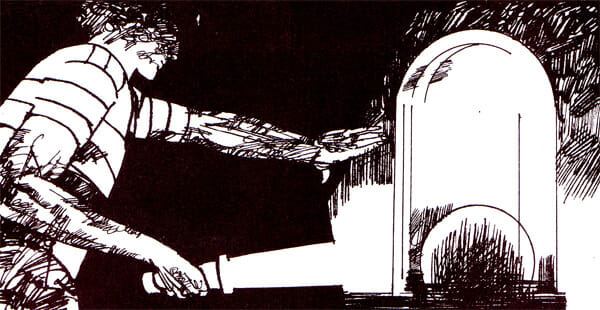 Outside in an alley, a strange long haired centaur named “Horse” appears and does something bad to Chris…I guess? He gets covered in light and starts screaming, so I can only assume it’s bad.

A couple police officers grab donuts and chase after what they think is a regular horse (but is really Horse) in the city streets. Horse gets trapped in a net and is taken to a hospital where scientists try to study him.

This was very hard to get into and just plain uninviting – it took me three tries to get through Horse! The art style is very scratchy and sketchy, like contour line drawings. A bit grotesque at times, but not all bad. Some panel sequences actually looked aesthetically pleasing, and if you took away all the speech bubbles, would be nice enough to frame on the wall. Other sequences were just plain confusing.

The enigmatic story and dialogue were of course the number one thing keeping me from enjoying this, but the fact that it was hard to tell some of the characters apart certainly didn’t help. Plus everyone in this comic is miserable and rude to each other, sometimes for no reason. The whole thing feels like a weird fever dream. 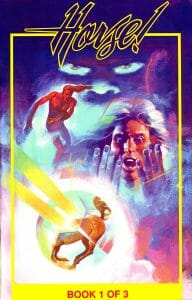 The cover is amazing

Honestly, the only reason I got this comic was because of the cover. It’s strange and striking, and if the price of admiring it means having to acknowledge the interior contents, then so be it. Acknowledge them I will.