Of course, we all know about Disney’s 1989 film, The Little Mermaid – mermaid Ariel falls in love with guy, makes deal with the Devil to become human, loses her voice, something-something, happily ever after.

From 1992-1994, an animated series offered more adventures of Ariel and friends that took place immediately before the film. And as a companion to this cartoon, Marvel Comics ran a comic series in 1994 that lasted 12 issues.

King Triton yells at his daughters

Our story begins under the sea (you know, like the song) in the Kingdom of Atlantica, where King Triton yells at all his daughters for being hoarders and leaving all their crap everywhere.

Flounder and Ariel start going through the junk

Flounder and Ariel start going through a huge pile of stuff, but she gets distracted by the return of her killer whale friend, Spot. Spot tells her that humans are preparing a ritual where they put up a tree and give gifts to each other (Christmas, duh).

Ariel pops up to the surface to see what this ritual is all about and watches a family’s celebration like a creepster. 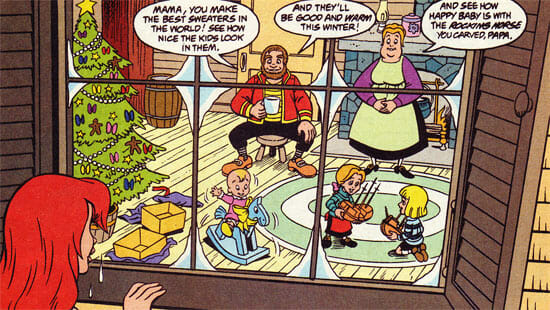 Back in Atlantica, there’s a subplot about random stuff going missing. Flounder catches the culprit in the act – Urchin.

Flounder and Ariel tail Urchin to a cave and find that he’s been giving all the stolen goods to orphan merchildren he’s been taking care of.

In the last scene, to tie all the stories together, the orphans are allowed to live in Triton’s Palace, and Ariel celebrates Christmas by giving them all the junk she doesn’t want anymore.

A Merry Christmas to all…

This was a nice little story with the important lesson that junk is bad and we should all get rid of junk, even if we’re a tiny bit attached to it (because junk is junk). But the writing was as simple as one would expect, since the comic was obviously made for a young audience. The artwork was nice and inviting, with its bright colors and clean lines; it perfectly imitates the look of the film/cartoon.

Only recommended if you’re a big fan of The Little Mermaid and you’ve worn out your VHS tape by watching it twice a day (once before breakfast, once after dinner) and need something new to sink your crab claws into.