Ex-Mutants was a comic series that ran from 1986 – 1993, through four different comic book publishers, and it was popular enough to spawn a video game for the Sega Genesis in 1992. The story took place on a war-ravaged, post-apocalyptic Earth populated by mutants. One such mutant, a scientist, uses a machine to transform five mutant test subjects back into humans. These now ex-mutants – Angela, Belushi, Erin, Vikki, and Lorelei – are on a mission to “return the shattered Earth to its former glory.”

This particular comic is part of the “Solo” Ex-Mutants series, which lasted six issues and ran from 1988-1989. Due to a lack of information online, I’m not quite sure where this issue falls in the Ex-Mutants’ overall storyline, but I’m under the impression each of the “Solo” issues are self-contained stories.

While exploring a city, Angela and Belushi get attacked by a group of mutants. They find refuge in a medical facility, still operational with its own generator and enough power to last at least another decade. 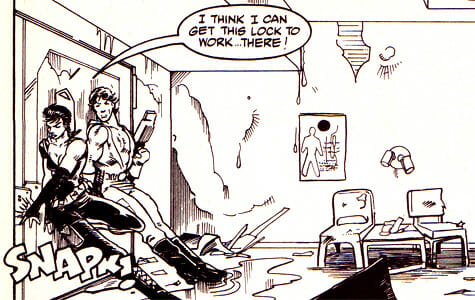 Angela and Belushi find refuge in a medical facility

There, Belushi finds a cryogenically frozen woman whom he immediately releases. “How can you be so damn stupid!” says Angela, “She could be dangerous – carrying some kind of infectious disease, anything!” 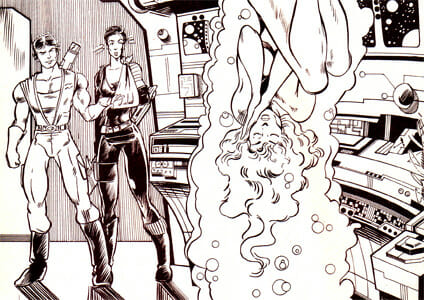 The woman introduces herself as Melanie. In 1988 she worked as a model; after a photoshoot, two Men in Black approached her claiming that nuclear war was inevitable and that they were looking for prime specimens to be cryogenically preserved to repopulate humanity after the war. 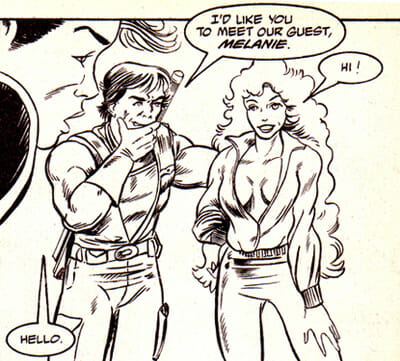 As Belushi and Melanie look around the medical facility, Angela finds a bunch of video tapes with the names of various women written on the labels. She watches the tape labeled “Melanie” and discovers that Melanie’s story was a total lie – Melanie is in fact a mental patient, locked up for murdering 29 men! 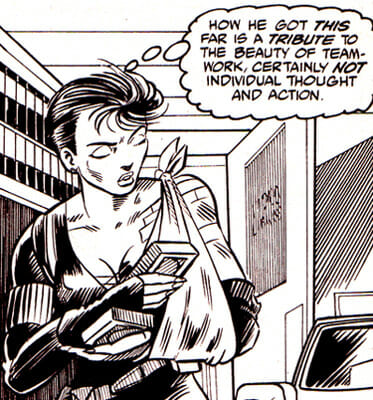 Some of the mutants break into the medical center, but Angela kills them with a rocket launcher. Then she catches up with Belushi and Melanie, and shoots Melanie just as she’s about to stab Belushi with a knife. 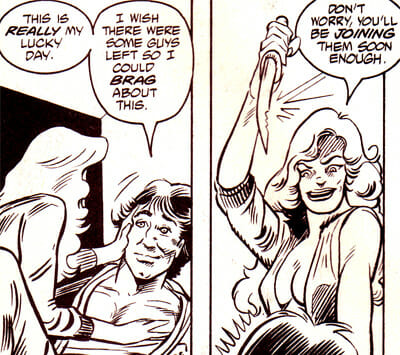 This was my first exposure to the Ex-Mutants universe, and it was a pretty fun read. Good action sequences and, for a story in a post-apocalyptic setting, it was oddly light and comedic. However, the twist at the end with Melanie being a murderer was pretty hokey, though it does make for a pretty good downer – the ex-mutants finally find another human (a pure human at that) and she ends up having to be killed.

The artwork appeared manga-inspired; some of the character anatomy looked a bit off every now and then.

Overall, while this issue has a couple minor flaws, I liked it enough that I now want to read more Ex-Mutants comics.