Dark Cat is a 45-minute long OVA that was released in 1991. It’s based on a horror manga series about two demon-hunting brothers (Ryoi and Hyoi) that turn into cats…or maybe they’re cats that turn into humans? I don’t know! The brothers in their cat form

Hyoi and Ryoi go undercover at a school that’s home to some recent demon activity. In their human forms, by the way, these two brothers retain their pointed ears, and I love that no one really notices or comments about this. 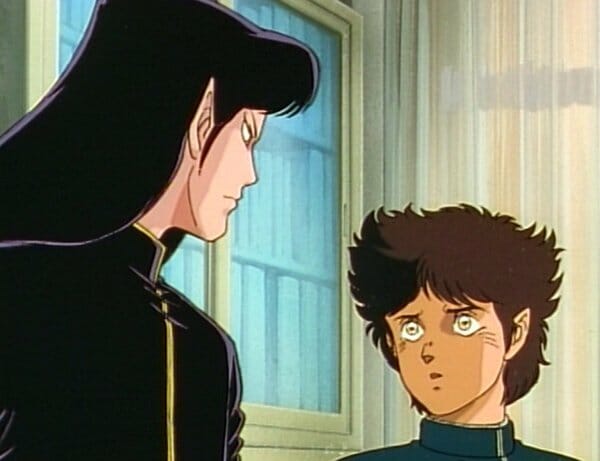 In their human form at the school

They find a demon-possessed teacher and chase her out to a forest, where she gets eaten by Jukokubo, a green cat monster. We get a bit of backstory and learn that this asshole gave the brothers their powers or taught them everything they knew, or whatever, but they rebelled against him and his evil teachings so they could use their powers for good. 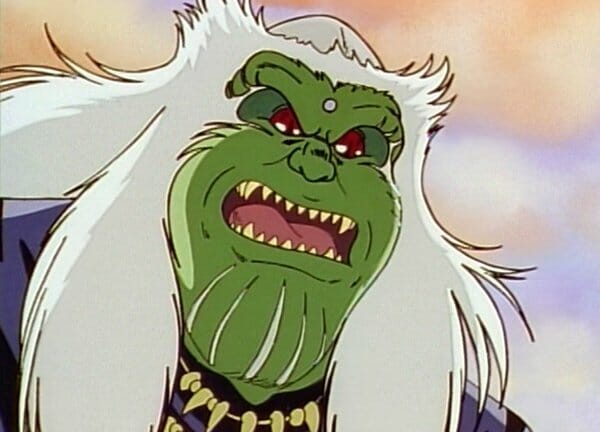 We get a fight scene where Jukokubo swiftly kicks Ryoi’s ass then leaves. So much for the student surpassing his master. Afterwards, Hyoi takes Ryoi to recuperate in a giant tree guarded by another cat person, while Jukokubo releases his demons to possess everyone in the city. 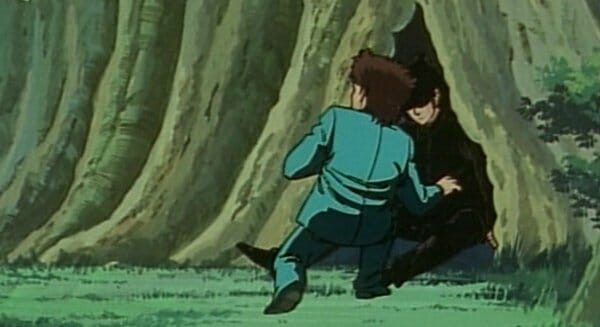 BRB gonna sleep in this tree for awhile

While all this is going on, there’s a subplot at the school about a girl who likes some guy, but he doesn’t pay any attention to her because he’s still hurting from his last crush not returning his feelings. 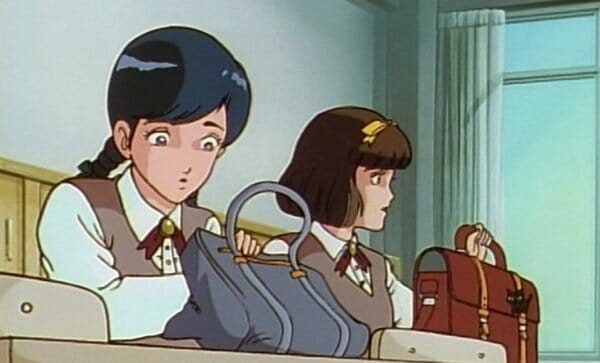 The girl ends up getting possessed by Jukokubo’s demons and turns into a giant tentacle monster at the school. The guy realizes, “oh, she actually likes me,” and lets her tentacles absorb him; their two souls (?) get reunited and they float into the sky. 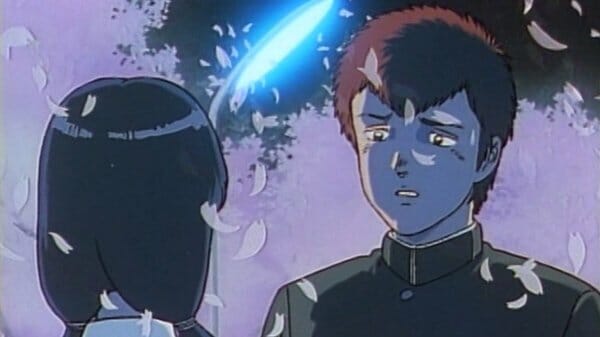 Ahh, just what we needed – melodrama!

Yeah, it’s a little weird that the two cat brothers kinda take a backseat to this relationship melodrama. Anyway, with the lovers gone, Jukokubo’s plain fails and he runs away. But the cat brothers will be ready to face him next time he tries something wicked and dastardly. 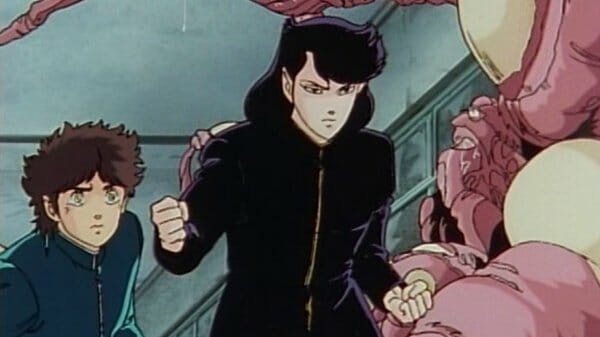 The brothers in the tentacle monster-infested school

“What’s this?” I asked aloud, “I’ve never heard of it Black Cat.” I quickly went to Google and read a lot of horrible things that convinced me to watch it. Yes, it is pretty bad…but it’s NOT as bad as I thought it was. I mean, it’s 45 minutes long and not a huge time investment, and I watched the dub, which helped ramp up the entertainment factor in the “so bad it’s good” category.

I forgot which brother was which. I think this is Ryoi?

I did get major Beauty and Warrior vibes from this, though. A lot of things aren’t exactly clear and you have to make inferences and smile and nod when weird, unexpected, unexplained things happen.

Hyoi with the forest cat

The animation is pretty drab and unremarkable (even the battle scenes) with one major exception: the tentacle monsters. Holy hell. They must’ve had a tentacle specialist on staff because all of the tentacles and possessed humans transforming into monsters was incredibly fluid and detailed. It felt like someone watched The Thing over and over again for research purposes.

This is the tamest screencap of the monsters I could take

I also feel I should note, whether I need to or not, that the tentacles are incredibly suggestive and phallic. The scene of, say, the tentacle coming out of the possessed teacher’s mouth looks near pornographic. Should I be surprised? Probably not. But very unexpected in a movie about demon slaying cat brothers.

Maybe worth a watch as a curiosity, like Things.