A special one-off comic published by IDW uniting all the Star Trek doctors for an adventure involving a virus that turns people to stone. 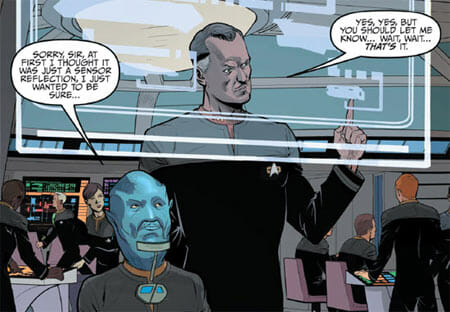 Space station Diamandis 1 is hosting a medical conference with Starfleet’s finest doctors in attendance, including Voyager’s EMH. The station picks up an escape pod filled with people infected by a virus that calcifies their flesh, essentially turning them to stone. The doctors do their best to find a cure but all end up becoming infected themselves, sans the EMH of course.

Doctors Bashir, Crusher, and Pulaski (!) are in a runabout bound for the conference. Their tardiness proves to be fortuitous as they’re contacted by the EMH and warned about the metamorphic virus. He also tells them that many of the station’s computer records have been deleted, but he is able to recover a partial file from the year 2269 that involves the original USS Enterprise. 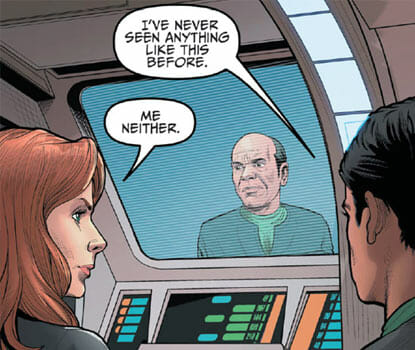 The EMH tells the group about the disease

The doctors in the runabout head over to visit Dr. McCoy, who’s still alive and now living on an agricultural planet. “You’d better not be here to draft me again,” he says. 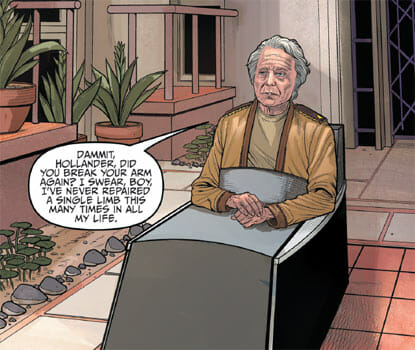 Crusher talks to McCoy about the disease

Kirk’s Enterprise picks up a distress call on some colony; McCoy, Chapel, and M’Benga beam down to the planet in environmental suits to see what’s up. They meet Dr. Phlox, who’s caring for the colonists – all stricken by the metamorphic virus. 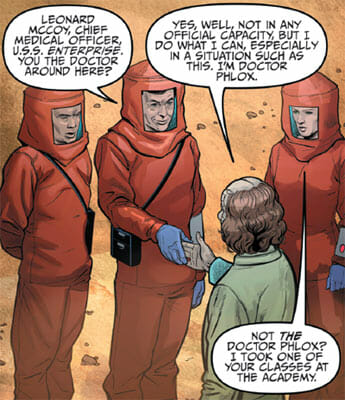 One of the patients is a space trader wearing a Tholian scarf. Phlox figures out that because the Tholians have crystalline bodies, some bacteria on the scarf is what’s calcifying people’s flesh. The docs figure out a cure and all the colonists’ symptoms are reversed. 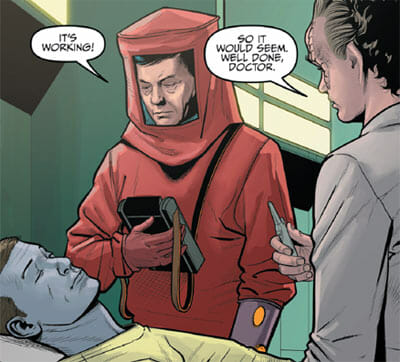 McCoy and Phlox find a cure

Back in the present, the elder McCoy gives Crusher his old tricorder with all the scans of the virus and the cure inside.

The trio heads to the station to administer the virus cure. Meanwhile, the EMH tracks down and apprehends the guy who deleted the files on the station’s computer.

The Doctor tracks down the saboteur

Turns out this guy was hired by a rogue group of expansionist Tholians wanting to spread the disease to other planets to make them more hospitable to colonize. They knew about the medical conference and sent the pod full of sick people to the station to neutralize all the doctors. Well guys, you didn’t win. Not today, because the one thing they didn’t count on was some of these doctors being late. That’s the lesson I took from this issue: always be late. 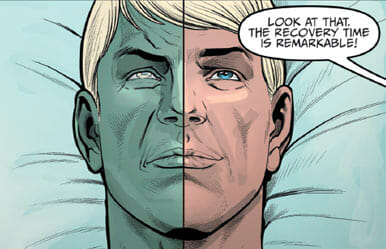 Doctor Who periodically teams up its old Doctors in reunion specials, notably in The Five Doctors. In this comic, we get Star Trek‘s The Six Doctors. Or Seven Doctors if you count M’Benga (as you should because Dr. M’Benga is very cool). It was also really nice seeing Phlox as Enterprise is vastly underrepresented in the Star Trek comic world. 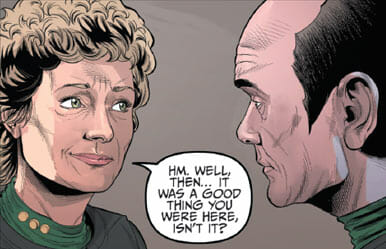 I liked the artwork – good likenesses

The story was really just an excuse to bring all these doctors together, but with that in mind, it was done well. The Tholians were a nice touch, but the fact that a splinter group was behind the whole thing, and the fact that this was all explained away by the EMH quickly in the last page, was incredibly abrupt and weak. But come on, all the Star Trek doctors in one story! Reading this comic would be a great way to celebrate the franchise’s 50th anniversary