A man fights crime with roller skates; considered one of the worst comics of all time.

After returning home from Vietnam, veteran and martial artist Billy Moon joins a roller derby at the insistence of an old friend.

This isn’t some game, this is roller derby!

Life was good for Billy. He had a gorgeous girlfriend named Angel and got to hang out with his best friend Jack every day. All is torn asunder when Billy accidentally kills Jack in a derby accident. My God… 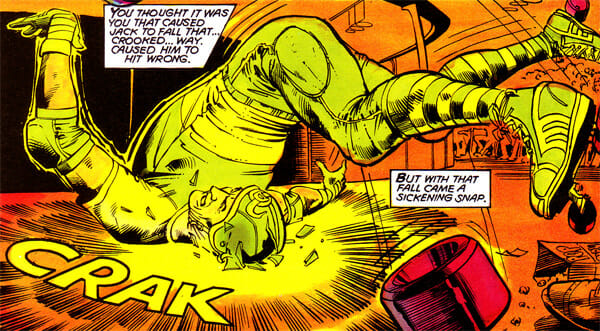 Billy and Angel hitchhike to California for a new start and they befriend a neighborhood kid named Paco. But – oh no – Billy’s life takes another hit when Angel is murdered by a biker wearing a skull jacket! 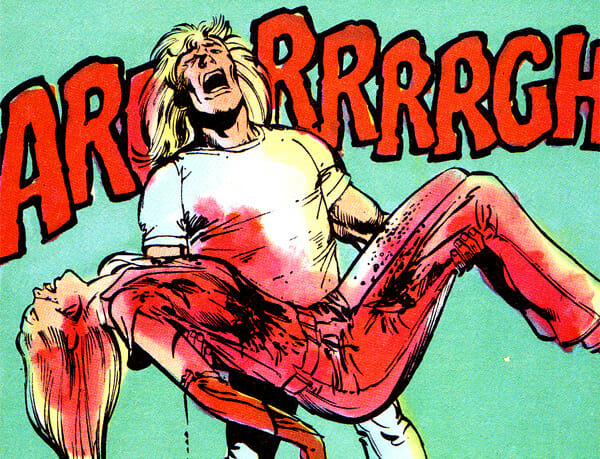 It’s just one thing after another

Inspired by Paco’s comic book collection, Billy becomes Skateman: a superhero that wears roller skates, and…uh, that’s it. He beats the crap out of biker gangs, but more often than not, they beat the crap out of him.

Skateman knows how to make an entrance

While hanging out at the club looking for info on Angel’s killer, Billy’s friend (and new love interest) Jill is kidnapped by a gang.

Skateman follows the gang to their hideout and attacks it with Paco and 30 of his friends on skateboards. Jill is rescued and Paco throws a grenade (where did he get that?!) at the hideout, destroying it.

I have no idea what’s going on

A backup story set up in a post-apocalyptic future. A group of people are stuck on some cliffs with a bunch of giant lizard things directly below them. One dude volunteers to take an airship and fly into an old facility to get a thing and do a thing. He is successful. 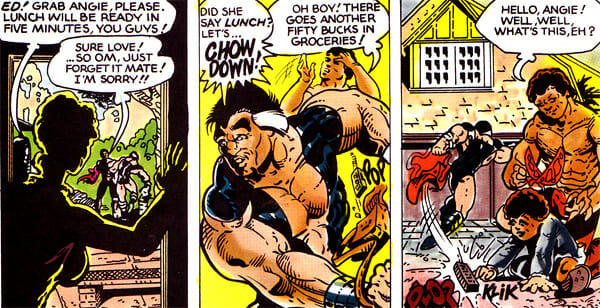 I have no idea what’s going on here, either

A whimsically-drawn second backup story about an Australian heavyweight champion who somehow teleports to another planet (Neo Zealondono) and has an interstellar adventure, then returns home in the end somehow.

Can you blame me for thinking it’s a comedy?

At first I thought this comic was a joke, and a pretty funny one at that. But the more I read, the more I realized it was genuine. Skateman is an amalgamation of the Punisher and Iron Fist, but at the end of the day, he’s a guy on skates who fights crime and takes himself very, very seriously. The comic’s easy to follow, but it’s not very original, with weak (even offensive) characters. And the backup stories? They exist. That’s all I can say about them. 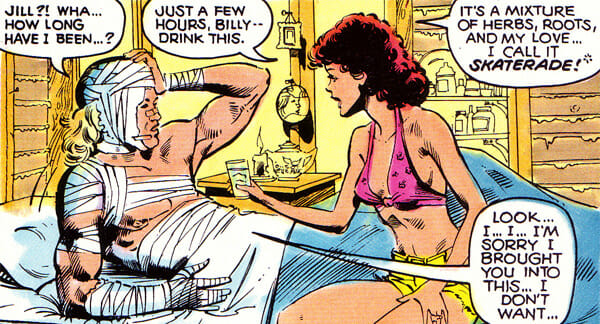 Skateman lasted only one issue. I’m okay with this.

Pretend it’s a comedy and you may enjoy it on some level.