A one-shot comic collecting Ronn Sutton’s Starbikers comic strips, which take place 100 years in the future. As he explains in the foreword, starbikers are “an immoral group doing whatever it takes to survive, legal or otherwise.” 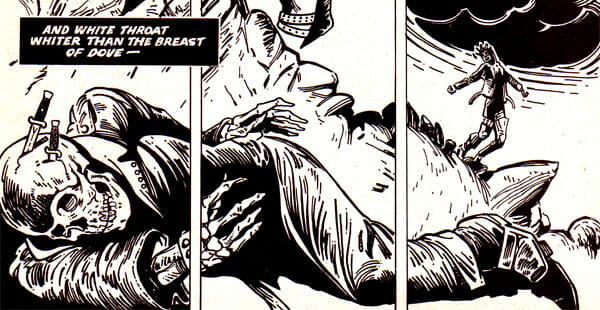 An eyepatched starbiker puts on a helmet and kills someone. On the way back to his space bike, he’s shot from behind and killed. All the text is from Oscar Wilde’s poem of the same name.

Dark Helmet meets with the starbiker

A metel-helmeted pirate guy goes to space bar and hires a bald space biker to find a playboy and “‘remind’ him of his debts.” The starbiker does as he is told and kills the playboy, but turns out it was the wrong guy. The helmet guy tries to kill the biker for screwing up, but he gets away.

In the end, the helmet guy returns to the bar and hires a second starbiker to go after and kill the first.

The starbiker captain has a rough day

The crew of a starbiker ship (not a bike?) have been stuck on a rainy jungle planet for 156 days, after making an emergency landing and damaging their ship. The constant rain has made them go crazy and some have killed each other; what was originally a crew of 12 is now a crew of 4.

One of these 4 goes really crazy and runs to the damaged ship. He tries to take off but it explodes. Now the remaining crew is stranded on the planet for good.

A confusing tale about a guy who’s blown out into space and loses sense of time as he, I guess, dies.

Although this compilation only gives us a small window into a larger universe, I got a good sense of its tone and how it worked. It’s really grimy and dirty; a world of lawlessness, a place of rogues. Everyone in Star Wars’ Mos Eisley Cantina would fit right in. It’s neither pleasant nor fun.

The starbiker stabs his target

I like that each of the four stories is a little different: The first and last are artsy and prosey, like illustrated short stories, while the middle two are easier to follow, more straightforward and actiony. But I just didn’t care for any of the characters, and the stories were too short and seemed to lack purpose. Like New Ruins for Old – sucks that the bikers’ situation got worse, but…so what?

The comic T-Minus-1, advertised in this issue, is said to feature more starbiker adventures, but I feel I’ve seen enough.