Genesis II was a pilot for a television series created by Gene Roddenberry in 1973. He wrote a treatment for the first twenty episodes, but ultimately the show never came to fruition. A second pilot, Planet Earth, using the same concept was later made, but it too failed to become a series.

“My name is Dylan Hunt. My story begins the day on which I died” 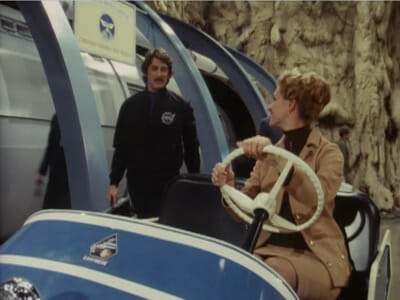 In the then-near future, the year 1979, pornstachioed Dylan Hunt works as a scientist in NASA’s underground laboratory in Carlsbad Caverns. He’s recently been working on a method to induce suspended animation for astronauts embarking on long space voyages; it’s time to test this method on a human, and there’s no better test subject than Hunt himself, chief of the project…right? Right? 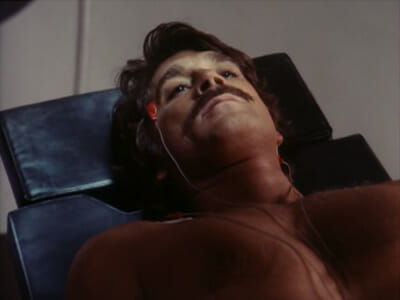 Just as Hunt goes under, there’s an earthquake and Hunt’s chamber is buried under rocks and debris. 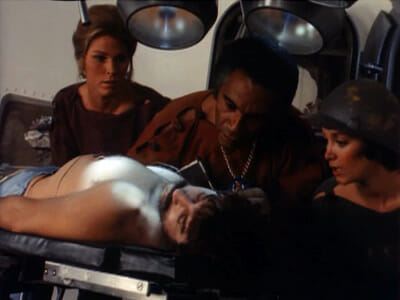 Years later, Hunt is found by the Pax

Hunt remains in stasis until the year 2133, long after a “Great Conflict” destroyed all of modern civilization. Now, in the New Mexico region at least, two new civilizations have developed: the peaceful, art-loving Pax and the Roman Empire-esque Tyrians. 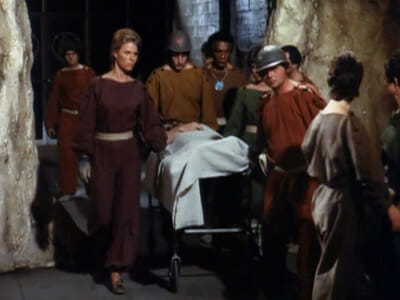 Hunt is taken to the underground Pax city

A group of Pax find and revive Hunt, then quickly take him to their underground city. One of these Pax members, Lyra-a (played by Mariette Hartley) helps nurse Hunt back to health. She reveals to him, in confidence, that she is in actuality a Tyrian living among the Pax as a spy. 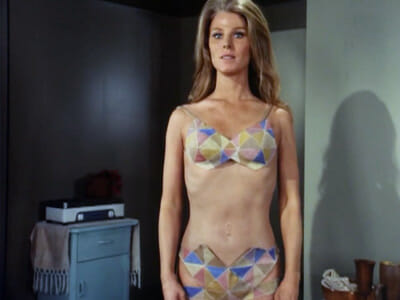 Lyra-a also reveals that she, like all Tyrians, is a mutant, with two hearts, two navels, and tremendous strength – “superior to humans in almost every way.” 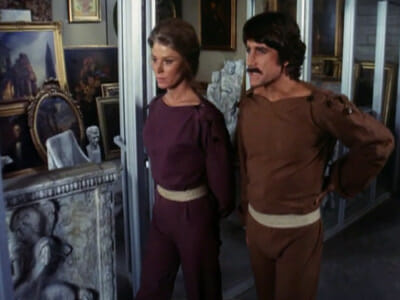 Lyra-a gives Hunt a tour of the Pax city

Lyra-a warns Hunt that the Pax aren’t as peace-loving as they seem, and the two of them escape together. They take an underground subshuttle (a subway system still intact from Hunt’s time that connects the entire world) to a maintenance station that lies close to the Tyrian city. 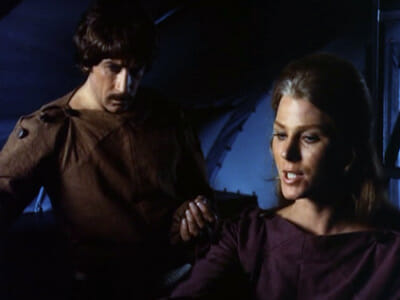 At the maintenance station are a ragged, motley group of people hanging around that Lyra-a sneers at. These are some of the lower class, human members of Tyrian society, and the first hint that maybe Lyra-a, and by extension the Tyrians, are not as friendly as we’re led to believe. 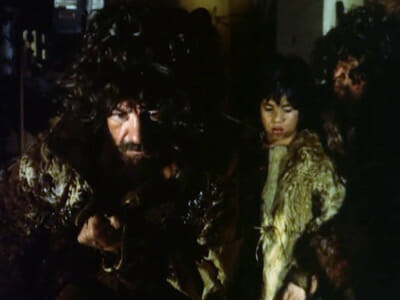 The first Tyrians we see

Lyra-a and Hunt leave the station by horseback and enter Tyrania, where human servants tend to their every needs. Hunt feels a little disturbed by the servants’ “damned eagerness to please.” Lyra-a tries to assuage his guilt, “They love us,” she says matter-of-factly, “just as an animal pet returns love given to it.” 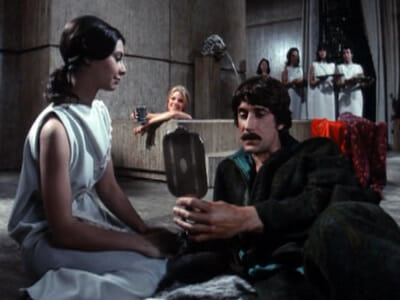 That night, Hunt leaves his room to snoop around the city. He runs into a trio of undercover Pax agents: Isaiah (played by Ted Cassidy), Dr. Kellum, and Singh. They tell Hunt that the Tyrians are really, really bad, and take him to a barred window so he can get a firsthand glimpse of the harsh treatment captured human slaves endure under their Tyrian masters. 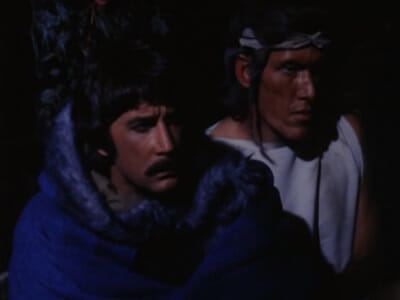 Pax, as they explain, is indeed as good as it sounds; Dr. Kellum explains that Pax was founded “to preserve the works, music, and art, and the decent ideals for when the world might try to rebuild again.” 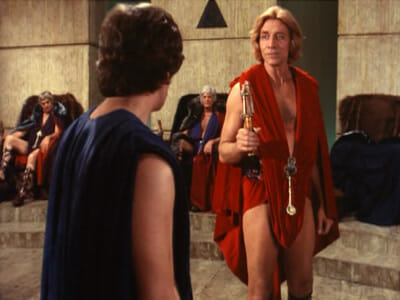 The next day, Hunt meets with the Tyrian leaders, who want him to repair their failing nuclear generator. He declines to help, and they beat him up with a stim – a wand that can cause pain or pleasure depending on the setting. Hunt is taken away and sentenced to go to servant school, but Isaiah and the other undercover Pax rescue him. 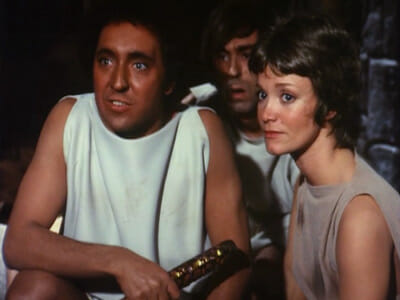 Hunt configures a couple radio receivers to detect stims; he’s briefly caught by Lyra-a, but escapes and finds the Tyrians’ stockpile of stims, which he and the Pax grab and distribute to all the slaves. 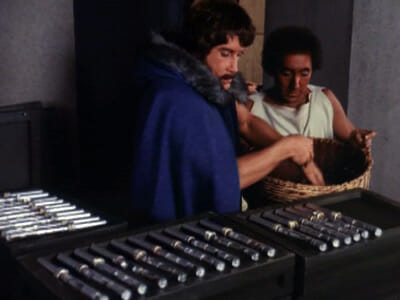 Hunt and Singh find all the stims

The slaves turn on their Tyrian masters as Hunt and the Pax escape to the subshuttle maintenance station to catch a ride home. 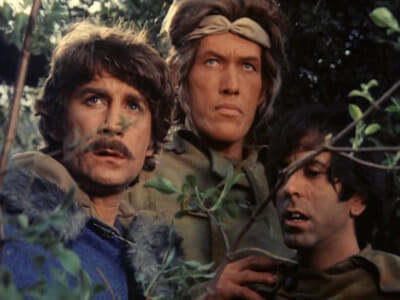 Lyra-a once again turns up, and forces Hunt to stay with her to fix the Tyrian reactor (otherwise she’ll be executed). In return, she allows the undercover Pax group to go free. 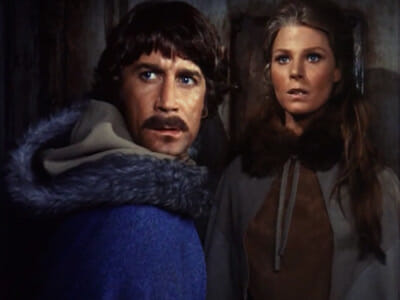 Hunt must stay behind with Lyra-a

Return to the Pax

Six days later, Hunt catches a subshuttle and returns to the underground Pax city. It seems the Tyrians didn’t want the reactor repaired for their city, but to power a missile system that they planned to use on the Pax. Hunt discovered this and destroyed the reactor with a time-delayed warhead. 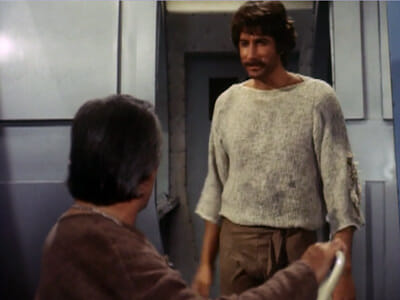 Hunt returns to the Pax city

The Pax leaders, the Primi, are not pleased with Hunt having murdered people, as the Pax are staunch pacifists. They tell Hunt that if he is to live among them, he must not kill another person, even if it means others will die. Hunt is a bit conflicted at first, but ultimately agrees to follow the Pax decree. 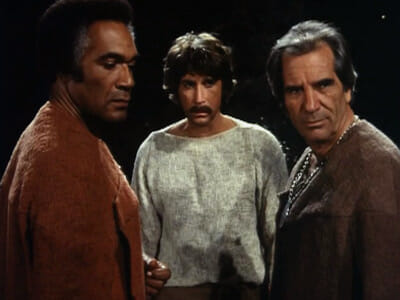 The Pax Primi are not pleased with Hunt’s actions

Genesis II was incredibly 70s, and thus very amusing; I got a lot of Logan’s Run vibes from some of the costumes and sets. 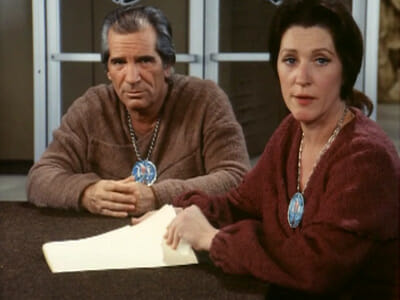 I liked the diversity in the cast (Roddenberry just loved the name “Singh”), but the acting wasn’t too hot. I didn’t really get a good sense of Hunt’s character; he was a bit languid and better suited hosting a nature documentary than going on post-apocalypse adventures. 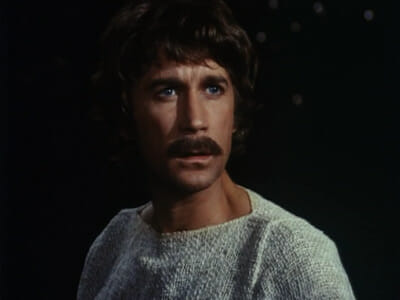 There was also some casual 70s sexism present, namely in Hunt’s interactions with Pax member Harper-Smythe. However I do love his pornstache; it matches his character perfectly and almost seems to be a character in its own right. 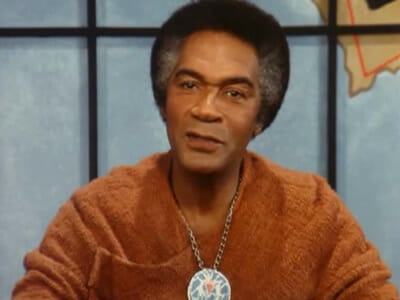 Mariette Hartley’s Lyra-a and Percy Rodriguez (who played Primus Isaac Kimbridge) were the real standouts here. The former, especially, proved to be Genesis II’s most interesting and entertaining character. According to the proposed episodes listed on Wikipedia, had the series gone forward, Lyra-a would have returned. 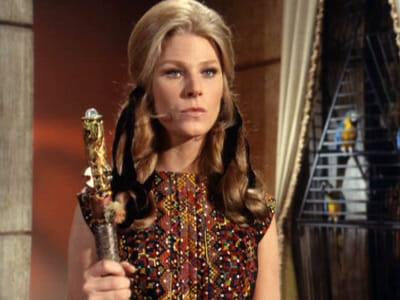 The pilot felt a bit rushed towards the end and could have used a longer runtime – probably an additional 20 minutes, so we can actually see Hunt sabotaging the Tyrian reactor instead of it being told to us. 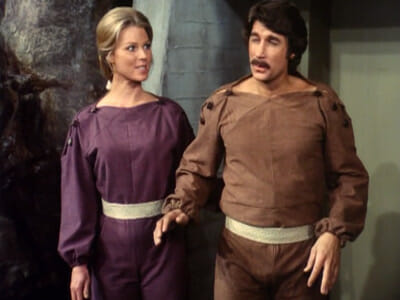 Genesis II is a quaint little gem that is not without its flaws; probably worth a watch if you’re a classic Star Trek or 70s science fiction fan.