DC Challenge is an experimental series, lasting 12 issues, written round robin style. Each writer would conclude their issue on a cliffhanger that the writer of the next issue would have to resolve.

The Joker, our narrator

The Joker serves as fourth wall-breaking narrator to get us up to speed with what’s happened in the series so far. Lots of weird storylines going on here, involving aliens invading Earth, the planet Rann, and dimensional portals ‘n stuff. The rest of the issue jumps around following different characters:

Jimmy Olson and Adam Strange find themselves in an alternate timeline where Germany won World War II. The duo is captured by Nazis, but Jimmy punches one, Adam Strange punches another, then both flee the scene.

Elsewhere, in the regular timeline, Batman finds himself falling into a volcano, when Mr. Mxyzptlk appears and saves his life by turning the lava into rubber. Mxyzptlk’s looking for Superman, but decides to be helpful and zap Batman back home to the Batcave. Batman wonders why Mxyzptlk was able to use his powers because the alien invaders have absorbed all magic. 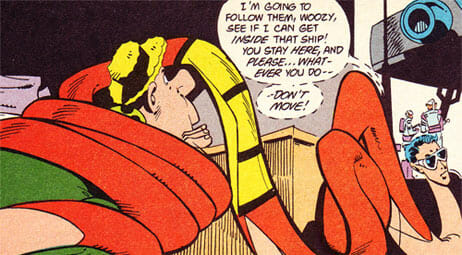 On the eastern seaboard, Plastic Man and his cartoony-looking sidekick Woozy Winks survey the alien invaders (who slightly resemble Skrulls) and their ships. I like that the alien invaders has patches on their uniforms that say “alien invader.” A portal appears and Woozy falls in.

Giving the disc to the space taxi driver

On Rann, Alanna Strange and her scientist dad Sardath talk about some approaching monster army; she casually mentions she’s been studying the occult and casts a magic spell to protect their building. Some guy in a space taxi shows up and Sardath gives him a disc with info to send to Earth.

Aquaman and Zatanna are really thirsty

In the Sahara Desert, Aquaman and Zatanna are slowly dying of thirst. Mxyzptlk pops in, still looking for Superman, and creates a fountain for the parched heroes, then pops out.

Winks meets up with Deadman and the two go back in time to World War II where they run into the Blackhawks.

We return to Plastic Man, still spying on alien invaders. He is discovered, then Joker shows up claiming responsibility for every weird thing that’s happened in the comic. 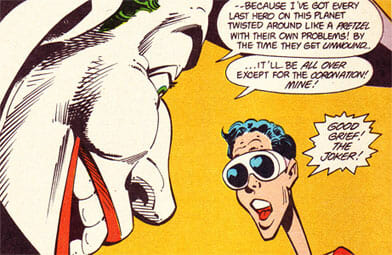 The Joker is revealed as the mastermind

This series was an interesting experiment that made for an incredibly confusing story, to say the least, and the fact that I’m starting in the middle (probably) doesn’t help. But something tells me that this “kitchen sink” approach was intentional, and that the writers were trying to push the envelope on how crazy they could make the story. Fun to write, but not so much to read – except for the Joker narrator aspect. That was fun.

When I first saw this comic, I thought it was going to be a DC superhero-themed activity book because of the tagline: “Can You Solve It Before We Do?” What’s there to solve? The cliffhangers? Having Mr. Mxyzptlk randomly show up to save Batman and Aquaman/Zatanna was a pretty cheap cliffhanger resolution.