Based on the popular anthology show of the same name, The Twilight Zone comics were published in the early ’90s by NOW and lasted three volumes of about 10 issues each. This first issue of the third volume tells the tragic tale of a boy and his alien friend. 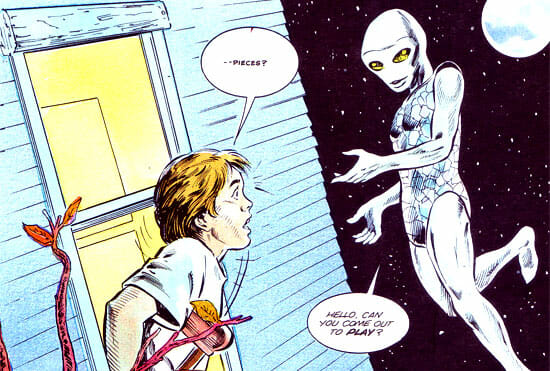 At night in a Kansas farmhouse, a young boy on crutches named Michael hears tapping on the window. Opening it reveals a gregarious, floating alien named Jo’n’ar AKA Joey. 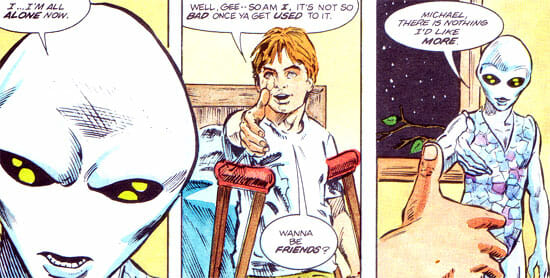 A friendship is born

The two become fast friends and start hanging out every night; Joey provides endless entertainment with demonstrations of his telekinetic powers, making Michael’s crutches dance and so forth.

One night, Michael’s dad catches the two boys together. Naturally, he’s frightened by what he doesn’t understand and fires his shotgun at Joey, killing him.

As Joey lies dying on the ground, he uses the last of his energy to restore Michael’s legs.

A simple story of friendship between two disparate individuals – a human and an alien – that meets a tragic end because humans are dumb. It was very predictable; as soon as we saw that Michael was on crutches, for instance, I immediately knew the alien was somehow going to heal him. Chekhov’s crutches, you might say.

One thing that stuck out was the fact that Michael wasn’t at all shocked at Joey’s appearance and seemed completely oblivious to the fact that he was an alien. It seemed a little weird, but I’m assuming it’s to emphasize Michael’s innocence.

Yes, Joey is from Kansas

Overall, this comic does a decent job of capturing the feel of the show, and reading it isn’t a bad way to pass the time. But I’m sure there are stronger issues in the series – there just has to be.