In 2002, while the popular Stargate SG-1 series was starting its sixth season on the Sci-Fi Channel, MGM cooked up this animated spin-off: Stargate Infinity. However, unlike the live action spin-offs of SG-1 that would later appear, Stargate Infinity had practically no relation to the rest of the established universe.

As such, it’s considered non-canon, not just by Stargate fans, but also the writers and producers of the live action Stargate shows, who had nothing to do with this cartoon.

And that’s not a bad thing because from what I’ve heard, this cartoon is awful…but how awful is it? Let’s find out! 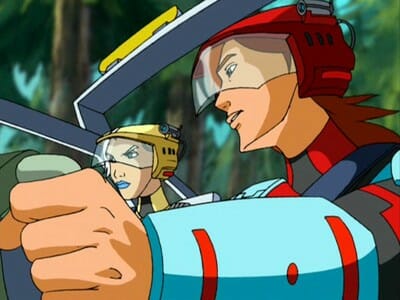 A jeep containing two armor-clad youths (R.J. Harrison and Stacey Bonner) speeds through a forest away from enemy fire. The jeep stops at a broken bridge. “Now what?” Harrison has two two options: going left means crashing in the gulley, if they go right, they’ll flip.

Some bald guy wearing a jetpack with wings flies overhead and yells at them. This is their superior, Major Gus Bonner. Every episode has a lesson, and today’s is on indecision: “Sometimes you just have to make a choice and deal with it,” says Gus.

It doesn’t matter in the end because this was all just a simulation. Though it’s unclear whether this was Earth or another planet.

Later at Stargate Command, Harrison hangs out with his cadet friends. Montoya asks how the drill went, but Harrison doesn’t want to talk about it. Some translucent alien guy (Ec’co) tries to make him feel better, that no cadet has ever passed the test on their first attempt. Sounds like the Kobayashi Maru. 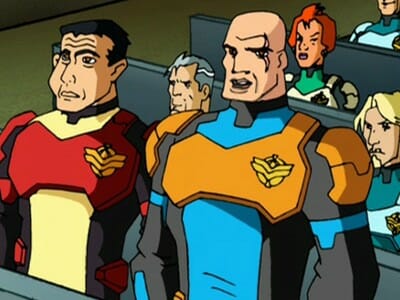 Stacey separates from the other cadets to attend her uncle’s court martial. Gus, who we saw earlier, is her uncle and he is accused of disobeyed orders. On planet PR6-308, he was supposed to establish a base camp, but instead ordered his men into an alien ambush. This was mankind’s first contact with these hostile aliens, the reptilian Tlak’kahn, by the way.

Gus maintains his innocence; someone gave the order, but it wasn’t him. The trio of judges (one of whom has weird facial hair) find him guilty, regardless. Though because of his good record and the fact that he saved his team, the court will give him a lenient punishment.

As the court martial concludes, a white-haired guy (Grimes) chuckles to himself. “What a shame.” Yep, he’s totally the one who framed Gus. We move to a laboratory where a female scientist (Dr. Mason) checks out an Egyptian sarcophagus with Montoya and Ec’co. Wait, why are they with her instead of a team of scientists? They’re just cadets! Grimes arrives late, probably up to no good. Mason explains that the sarcophagus was found buried in the same place as the Stargate in Egypt and that it may have a connection to the Ancients.

Inside the sarcophagus is what looks like a mummy but is actually a hollow statue containing an organic mass. The mass grows and pops out of the statue Alien style, leaps on the ground and slithers away. Montoya uses her empathic abilities (?) and senses its fear, distracting it enough for Ec’co to trap it in a glass case.

Grimes sneaks out into the hallway and, thanks to his monologue, reveals that he is actually a shapeshifting alien (Nephestis) working for the Tlak’kahn. He shifts into Gus and goes to the Stargate control room, where he zaps Harrison and messes with the computer. 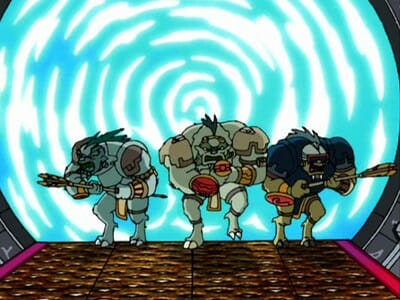 In the Gate Room, the real Gus goes to his niece and tells her he wants to look at the Stargate one last time. He tells her that in all of his travels, all the planets he’s been to, “the best world is the next one.” Suddenly, the Stargate’s Iris opens and it starts dialing. The Tlak’kahn arrive and fire staff weapons everywhere. They’re after the worm, which they believe to be an Ancient.

Nephestis shapeshifts back into Grimes and zaps Dr. Mason, then takes the Ancient away. The cadets run into Gus, but aren’t sure whether they should trust him or not. Harrison decides he’s going to make a choice and trusts him.

Stargate personnel fight off the oncoming Tlak’kahn warriors. Gus and the cadets steal back the Ancient, get in special vehicles (like the jeep and jetpack thing we saw in the opening scene), and go through the Stargate together.

They fight the Tlak’kahn forces on the other side, then Gus dials a new planet on the DHD, and they go through the Stargate once more. Destination: unknown. 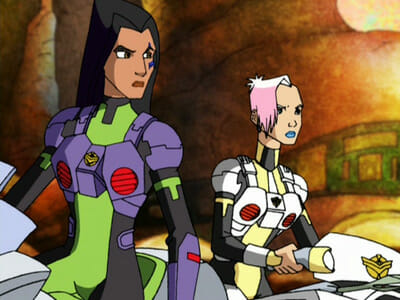 Montoya and Stacey find themselves on another world

Well, I think it’s safe to say that Stargate Infinity is indeed as awful as everyone says it is. The characters are simple good/evil cutouts that are hardly unique or innovative. Their armor and vehicles add an obnoxious toyetic element to this show, which is puzzling since no toys were ever made.

The weakness of Stargate Infinity lies solely in the writing and plotting. First of all, they really beat the episode’s lesson-of-the-day into the audience’s head. There was no subtlety at all – the bad guys were bad, the good guys were good – and the dialogue was way too hammy. I see Montoya, the empath, having the potential to be an annoying character. Also, all attempts at humor and one-liners fell flat. Gus is certainly no Jack O’Neill. 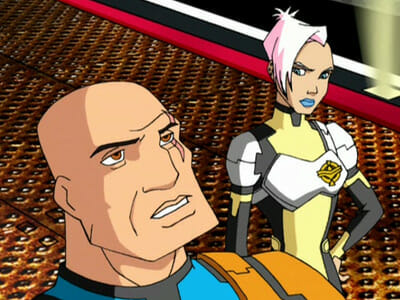 Bonner and Stacey in front of the Stargate

Stargate in the Future

I understand why they set Stargate Infinity in the future, so it wouldn’t step on the toes of SG-1, but really, it made things worse. The technology we see the humans acquire in later SG-1 far surpasses what we see in Infinity. And if there was any question on whether or not Infinity is canon, it’s the fact that the Ancients are shown as being worm/butterfly (?) creatures – a definite clash with what we’ve seen in the other Stargate shows, with the human-looking Ancients.

This show really could have used a connection to the rest of the Stargate franchise. Why didn’t they make a show about another SG team? Or SG-1 the cartoon? They wouldn’t even have to use the same cast as the live action show, just their likenesses and soundalikes. 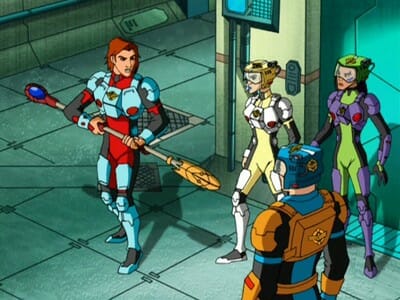 On the Plus Side…

Stargate Infinity appears to be serialized or have some kind of story arc going for it, which allows for more intricate stories to be told. The art and character designs are okay; the animation wasn’t bad, there were a lot of nice, bright colors, and the acting was decent.

Overall, it was pretty boring. As I watched the episode, I just wanted it to be over. Then, when it finally finished, I found the ending way too abrupt. It just…ended.

Not recommended, even if you’re a fan of Stargate.
If you’ve watched every single live action Stargate episode over and over again and are starved for something new, I still wouldn’t recommend this.