Based on the ’80s anime/manga series Saint Seiya by Masami Kurumada, this film retells the first major chapter of the show, specifically the “12 Houses” arc, in a condensed form. The story is about armored warriors (saints) – each representing a different constellation – who serve the goddess Athena to fight the forces of evil.

Sanctuary is like Saint HQ; in the show, it was located in Greece, but in this film, it’s depicted as a floating, futuristic city (most likely influenced by the look of Asgard in Marvel’s Thor films). 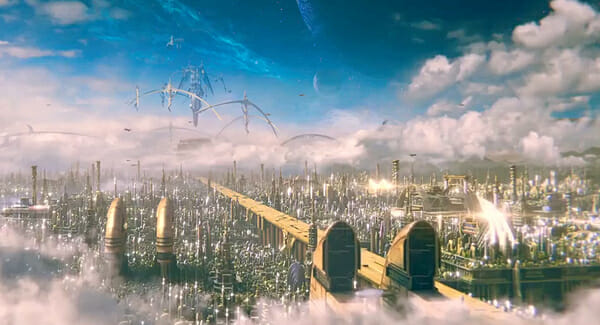 As our story begins, the ruler of Sanctuary, the Pope, has become tainted by evil and orders a baby’s execution – this baby is the reincarnation of Athena, and the only person standing in his way of conquering the world or whatever. 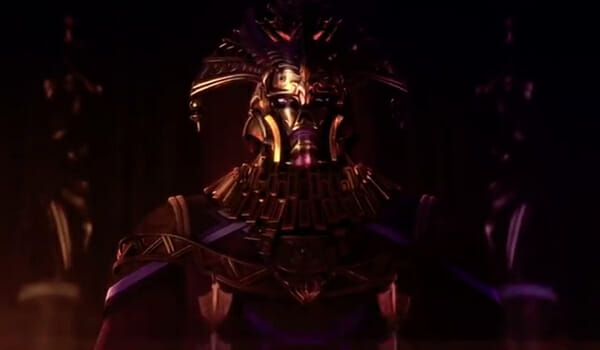 In the opening scene, the Gold Saint of Sagittarius, Aioros, flies away from Sanctuary carrying the infant Athena. He’s attacked by two other Gold Saints and makes a crash landing in a cave. There, Aioros is found by an old man named Mitsumasa Kido; with his dying breath, Aioros tells Kido about saints and the evil Pope, then tells Kido to look after the baby. 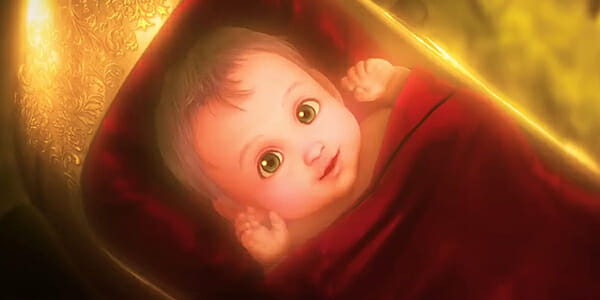 Kido raises the baby as his granddaughter (now named Saori) for the remainder of his life. 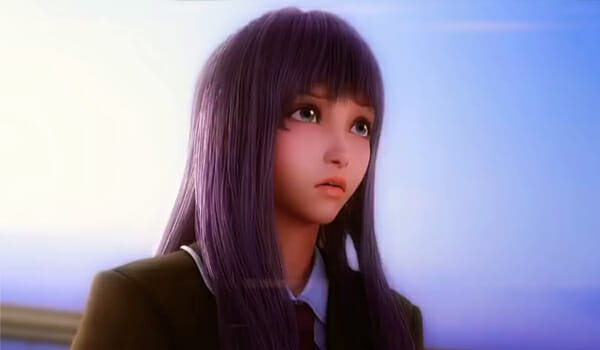 16 years later, Saori is a teenager and her limo is attacked by Silver Saints working for the Pope. Bronze Saints (Pegasus Seiya, Dragon Shiryu, Cygnus Hyoga, Andromeda Shun, and later Phoenix Ikki) come to her aid and kill all the Silver Saints with their special attacks.

Our heroes head over to Sanctuary to prove to the Pope and the other saints that she is the real Athena; however, to reach his chambers, they have to pass through 12 houses – each guarded by a Gold Saint representing one of the 12 constellations of the zodiac.

So at this point, the film follows the show/manga pretty closely, and one-by-one they start recruiting the Gold Saints to their side. They start at the Aries House, where Aries Saint Mu lets them go ahead without any trouble, then they fight the gargantuan Taurus Aldebaran in the next house.

Speeding Up the Story

Halfway through these fights, it seems the film’s writer realized there wasn’t enough time to show all 12 Houses, so in the Sagittarius House, the remaining Gold Saints fight the Bronze Saints in a free-for-all. That is, until Virgo Shaka shows up and is like, “Hey guys, stop fighting. The Pope is the real bad guy,” and we move on to the final fight:

The Pope reveals himself as the Gemini Saint, Saga, and fuses his body with a giant statue robot. Seiya puts on the Sagittarius Cloth, and all the other saints, Bronze and Gold alike, unite to defeat Saga.

Seiya puts on the Sagittarius Cloth

The film is 3d animated and looks fantastic! Everything is so shiny, and there were times early on I kept thinking, “wow, this looks cool.” The animation is very fluid and characters have wide-eyed, expressive designs as if they’re from a Pixar film.

But with content from 30+ episodes crammed into a 93 minute movie, the plot and characterization suffered a lot. The more I watched, the more this film lost its luster; the fights started looking more and more the same. I stopped caring. It was like eating too much candy – after awhile you get tired of it and want some real food.

Some of the Gold Saints are reduced to cameos, like Pisces Aphrodite, who just has a quick meeting with the Pope and is thrown off a balcony to his death. Everything goes by so fast that you don’t really get a good sense of the characters or their relationships, and obviously a lot of the supporting cast had to be cut out as well. 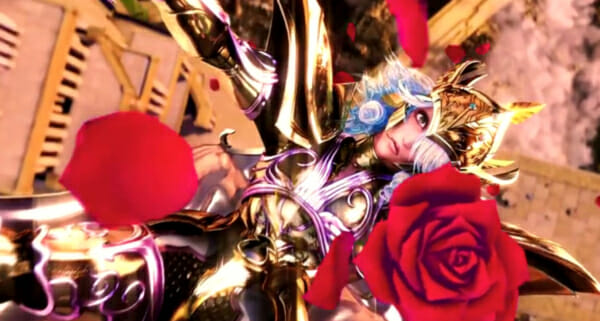 Pisces Aphrodite only gets a couple minutes of screentime

In the show, the saints are more “professional” and serious, but here they’re and comedic. Maybe that’s a side effect of the Pixar style. There’s a Looney Toons moment where Seiya and Saori crash through a ceiling window in the Taurus House, and Hyoga gets ready to catch them…but misses them at the last second.

Hyoga fails to catch the falling Seiya and Saori

I also didn’t like the House of Cancer scene; in the show it had a really creepy atmosphere, since the walls of Deathmask’s house are adorned with the faces of his victims (including children). But here, when the Bronze Saints enter the house, we’re treated to a music number: Deathmask sings a freakin’ song and the faces act as backup singers. It was so tonally weird that I couldn’t believe what I was seeing. 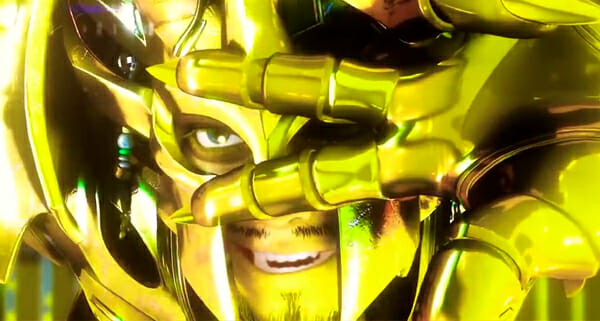 You really have to be a Saint Seiya fan to watch this, or at least be familiar with the story. And even then, I only recommend it to the staunchest completist. Without the magic of the series, this soulless adaptation is just a string of fight scenes – beautifully animated, mind you, but lacking soul.