Neil Breen returns in his fourth feature film, where he plays an artificial intelligence from the far future that possesses the body of a drug addict in the Nevada desert. He takes on the name Thgil – “light” spelled backwards – after seeing a container of light yogurt. Seriously. 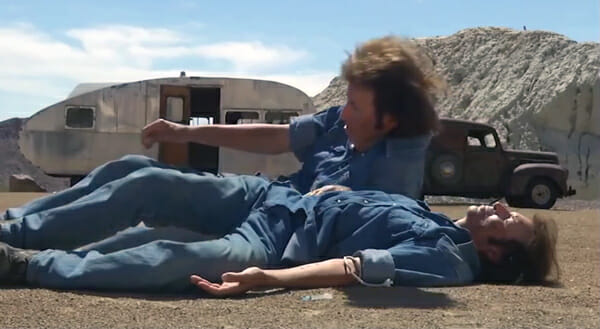 A woman named Amanda and her niece escape a group of human traffickers and come across Thgil, who gives them sanctuary in a run down trailer. 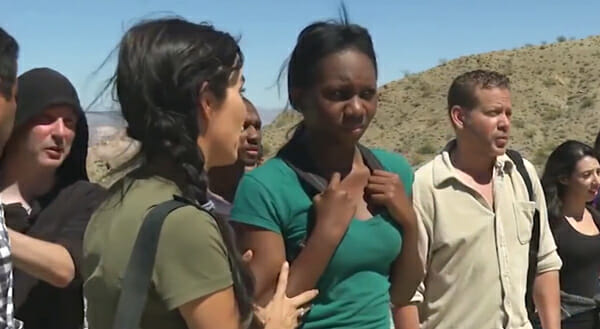 Amanda and her niece

He tells them he’s on a mission to “eliminate” all the bad humans; he starts with the human traffickers then works his way up to politicians, corrupt lawyers, corporate CEOs, etc. (the usual suspects in Breen films). 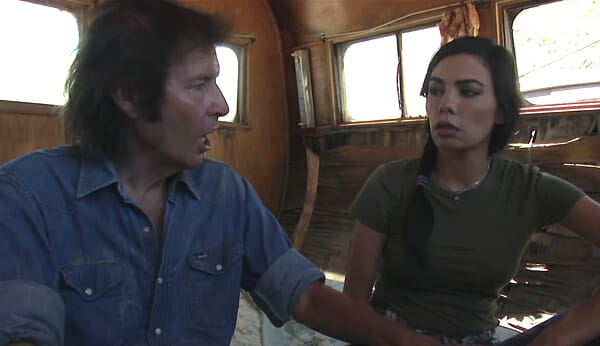 Thgil tells Amanda who he is

There’s a subplot involving three kids and an ailing professor tracking an alien signal. It leads them to Thgil who rewards them with…a shitload of coins. 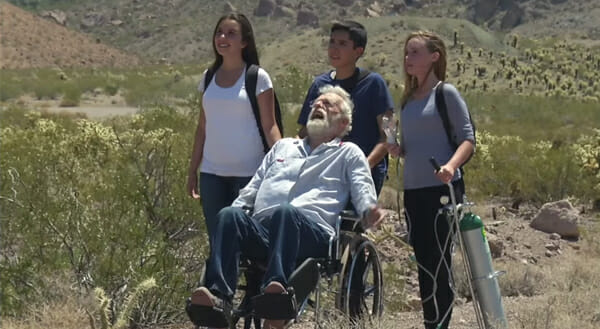 The B-plot characters no one cares about

Amanda’s niece disappears, but Thgil finds her in a bunker with a solider and cures him of his PTSD. 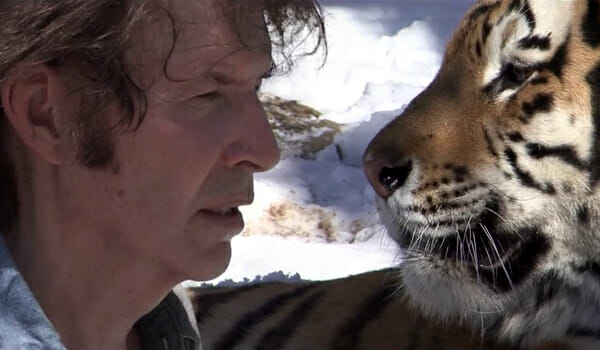 A tiger because…why not? (and Amanda has a tiger tattoo for some reason)

Then Amanda’s ex-husband randomly shows up and kills her and the niece, but Thgil brings them back to life (and also brings back a couple people who were killed by the traffickers at the beginning of the film). 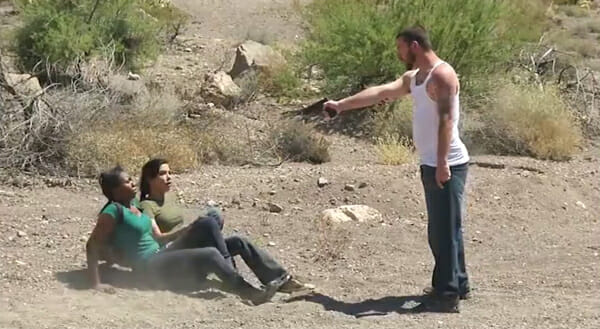 Amanda’s ex-husband just shows up out of nowhere

Thgil’s just about ready to leave, but shows Amanda a huge pile of bodies – all the bad people he “eliminated.” Cheery. 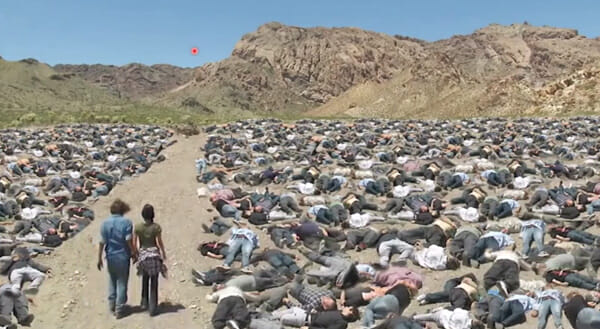 Well, that’s certainly a way to end the film

This felt like a higher budgeted version of Breen’s second film, I am Here….Now, about (what is essentially) Space Jesus coming to Earth and destroying evil and rescuing good. It’s a step down from Fateful Findings, which benefited from a more grounded environment that allowed for more character interaction – because if there’s one thing we all love about Breen films, it’s awkward acting and dialogue. 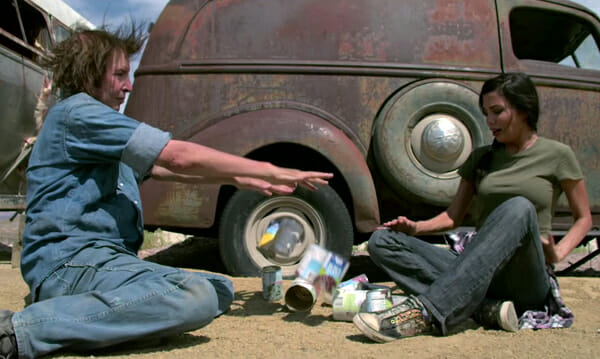 Pass Thru doesn’t have quite as memorable moments or lines as Breen’s last two films, but the few that it does are fantastic. I love Thgil cleaning his trailer (“It’s clean. It’s all clean!”) and Amanda’s exposition-laden exclamation: “We have to keep running! Your mother’s my sister. She was murdered. I swore to God I’d take care of you. You’re my niece. We have to keep running!” 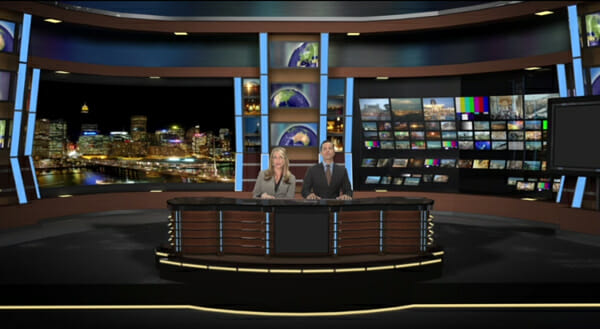 I hate how far away this shot was

I love the scenes where Thgil infiltrates several cocktail parties full of the “bad” people (in obviously green screened environments) just to tell them how corrupt they are before killing them all in an explosion. 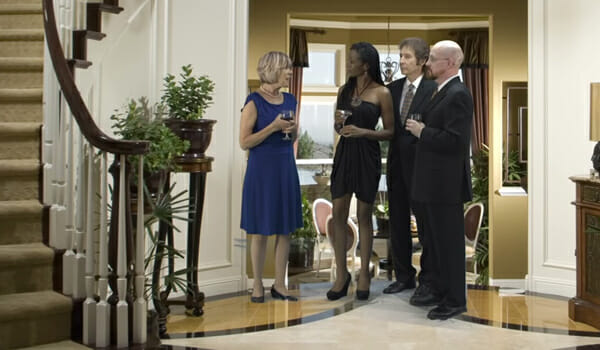 Thgil just shows up at these parties

The actresses who portray Amanda and the lead human trafficker are my favorite because of how they overact and shout nearly everything they say. It seems Amanda’s actress is an accomplished martial artist, and it’s a real shame Breen didn’t showcase her skills in the film. 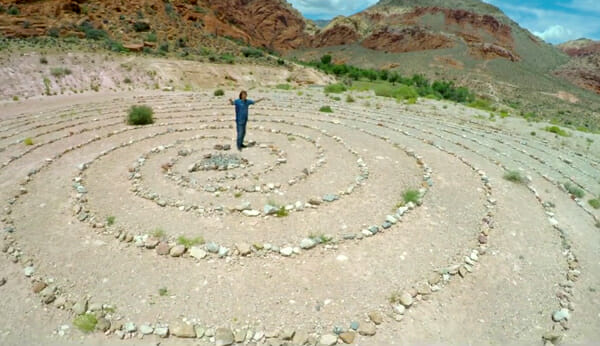 Breen continues to evolve in the technical department: this film has one or two drone shots, a CGI stock footage tiger, green screen scenes, a huge cast of extras – but when it comes to story and execution, it falls short. Like I am Here….Now, there’s not a lot of drama or excitement when your lead character is an omnipotent being. The subplot with the kids was unnecessary, and the soldier and ex-husband scenes at the end came way late, way out of nowhere to be of any use in the story.