Becoming a filmmaker was Neil Breen‘s lifelong dream. After establishing himself as an architect, he saved funds to self-finance and self-produce his first film, Double Down. With no prior experience or background in the industry, Breen set out to teach himself how to become a filmmaker, and stresses that Double Down was his film school. 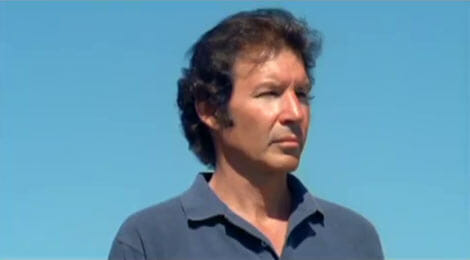 Double Down follows ex-agent/spy/whatever Aaron Brand (also played by Breen), a super-amazing guy with super-amazing skills: he can hack through any system, kill anyone, has extensive knowledge of chemical warfare, has many medals, and some sort of cybernetic implant things. 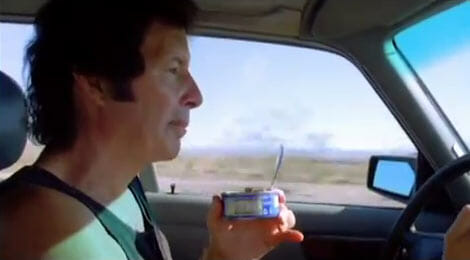 He spends most of his time traveling alone in his car, eating tuna. He has a million of cell phones and laptops at his disposal, as well as DirecTV satellite dishes that he uses to make some sort of energy shield to keep him off the government’s radar and kill (?) anyone who gets too close. 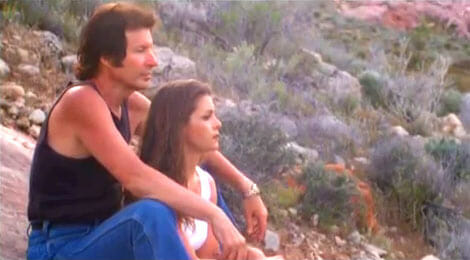 Aaron is haunted by hallucinations of his dead wife

Aaron isn’t totally perfect, though. He’s a tortured soul! The love of his life was killed in front of his very eyes as the two of them were skinny dipping in a pool somewhere, and ever since then, he’s been haunted by hallucinations of her. Aaron also sees apparitions of his parents in one scene: “Is there life after death?” he asks them. I think the answer is obvious, Aaron. 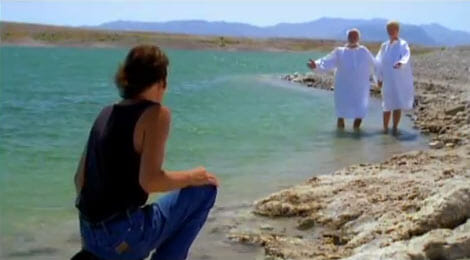 Aaron speaks to ghosts (?) of his parents

Mysteriously, every morning when Aaron awakens on the ground outside, he finds the words “Help me” written in blood on the underside of his vehicle (?). 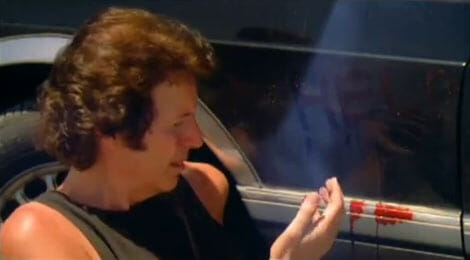 Aaron now works for the highest bidder. His most recent job involves shutting down the Las Vegas strip for two months to mess with the economy, but despite mentioning this plan several times, Aaron doesn’t really do anything about it until the end of the film. 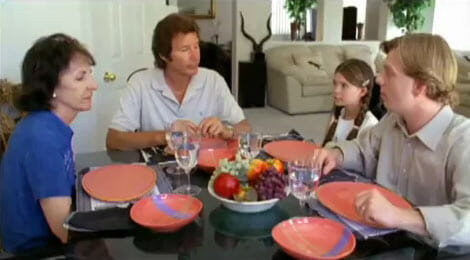 Aaron has dinner with his (?) family 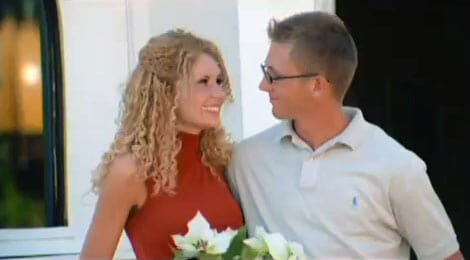 Despite being super awesome, Aaron picks up the wrong couple!

Towards the end of the film, the hallucinations of his dead wife start getting to Aaron. He also receives a phone call from the family he ate dinner with and learns that placing a hand on someone’s head does not, in fact, cure cancer. It pushes him over the edge. 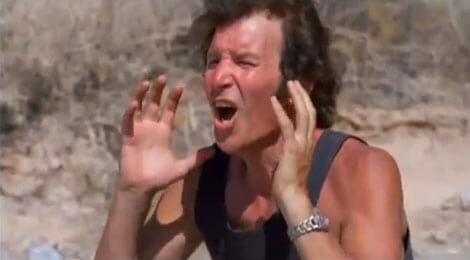 Aaron runs through the Nevada cliff side screaming, then collapses on the ground, yelling that he “can’t go on with this” and that he’s an American who loves his country. 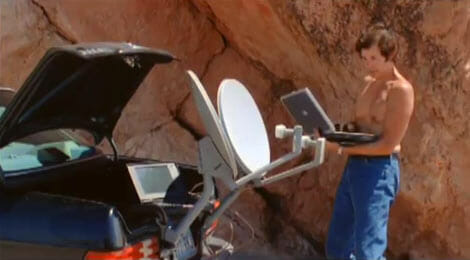 This is pretty much the entire film

Aaron has an epiphany and decides not to shutdown the Las Vegas strip. After the first phase of the plot begins, he calls the directors of the CIA, FBI, and Homeland Security (plus a random senator) and tips them off; the men who were working with Aaron to carry out the plan are gunned down. 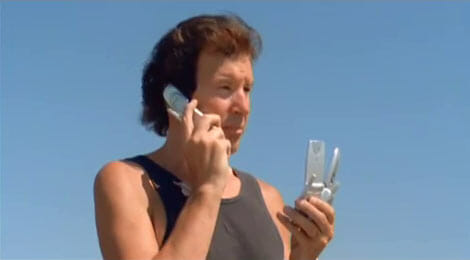 Aaron calls it off

At the end, Aaron returns to the desert to carry a hallucination of his dead wife around. He sees himself and his wife as children, and gets in his car with himself as a child…but doesn’t (?). Then his wife appears in the car and they drive off. 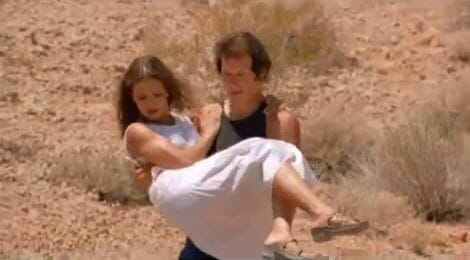 No idea what’s going on here

This film is Neil Breen’s first foray into film, and it shows. It’s unfocused, confusing and hard to follow, with weak dialogue and lifeless acting. Many lines were either repeated over and over again or had a lot of unnatural pauses.

There was a lot of stock footage used, including footage of space satellites, parties at Vegas, people in laboratories, among others. 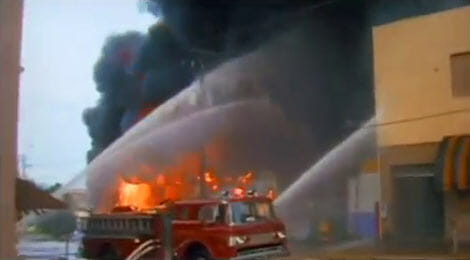 Nearly the entire film is narrated by Aaron, describing his every move and talking about how great he is; there’s very little character interaction and conversations. Instead, there’s tons of footage of Neil Breen crawling around the desert landscape and constantly reused footage of him holding his wife. It’s very boring and needed tighter editing. 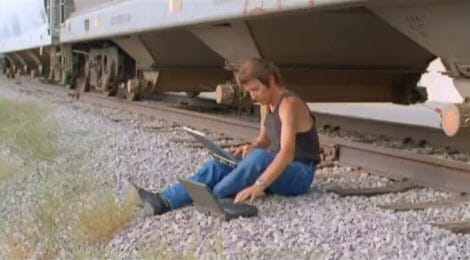 Aaron, always on his laptops

I do have to give Breen credit for having the guts to cut his filmmaking teeth on a feature length film, even if it did utilize a lot of stock footage. He also not only directed, starred, wrote, and edited the film, but he also catered! 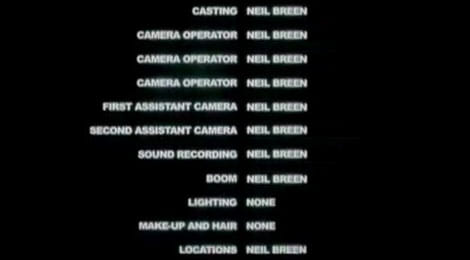 Not really but pretty much

This is definitely a vanity project. Aaron Brand is the coolest guy around; his only flaw is that he’s a dark loner with an enigmatic past, and a dead wife he can’t get over. 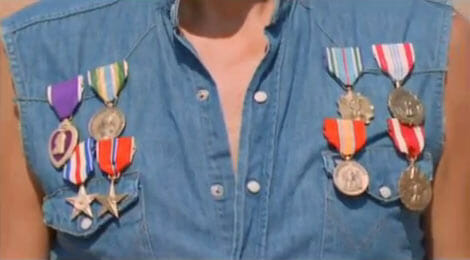 I do find it funny that despite Aaron being so amazing and badass, he makes the mistake of kidnapping the wrong couple and killing the groom – an innocent man! Shouldn’t confirming the identities of the target be his top priority? Then he kicks the bride out of his car and throws her outside next to the groom’s body. What?! 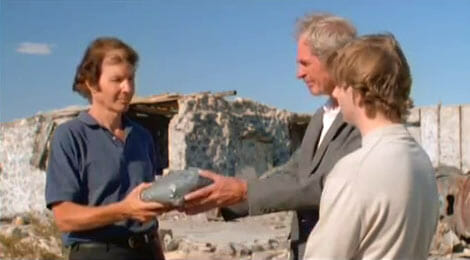 Aaron is far from sympathetic. He’s supposed to be an anti-hero, but he’s a grade-A jerk. In one of his voiceovers, he explains that he’s protected himself by placing tons of explosives worldwide, and if doesn’t enter a code on one of his many laptops, they all go off. All right, so he won’t be targeted by assassins or whatever. Check. But what if he has an accident? Say, he dies by tripping on some rocks like the old guy or gets hit by a car? He won’t be able to enter the code, so will the explosives still go off? 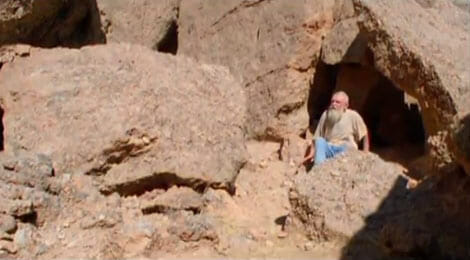 The old man who gives Aaron the stone

These are the kinds of questions you ask yourself when you watch Double Down. There are tons, and tons more questions I could ask – like what was up with the mysterious stone? And the final scene! What was that about

The very last line spoken in the film, uttered by Aaron (of course), is, “Forgive me. It had to be this way.” Very fitting.