SuperPro must contend with a corrupt sports agent named Hal Leech and the minor supervillain Constrictor. 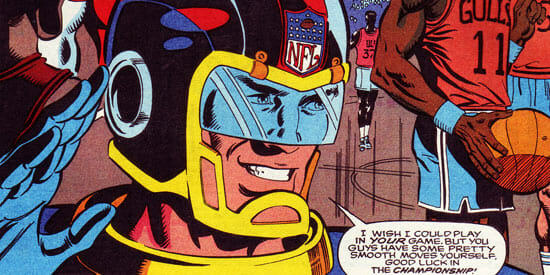 Basketball? I thought this was a football comic

The issue begins with SuperPro playing basketball in an exhibition match to raise money for kids who can’t afford college. Shoutout to Jane and Ken for telling us all this in clunky expository dialogue!

As SuperPro leaves the court to change back into regular ol’ Phil, he overhears one of the players (Bud Gorkin) getting threatened by crooked football agent Hal Leech. 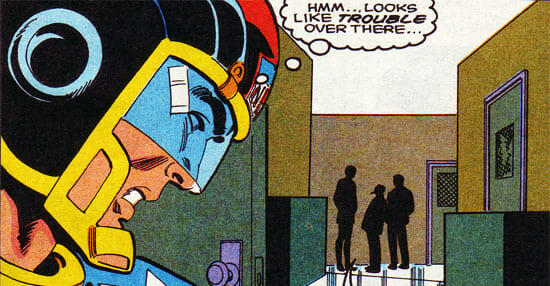 The next day, Phil tries to poke Mr. Leech to see what he’s up to, but gets poked back when Leech sends a group of goons after him. Phil outruns the goons and changes into his SuperPro costume, then beats them all up. He recognizes a goon: Zip Ramirez, former football player dude.

Ken does computer stuff and finds that both Bud and Zip went to Clinton University. They had failing grades but the dean let them graduate anyway and sent them to Leech.

Phil and Ken investigate the university

Phil calls Bud to arrange an interview to expose Leech, but Leech sends C-list villain Constrictor to silence Bud. SuperPro, of course, arrives and beats up Constrictor; Leech and the Clinton University Dean are arrested, and Phil makes a quick speech to the press to wrap up the story in a neat little bow. 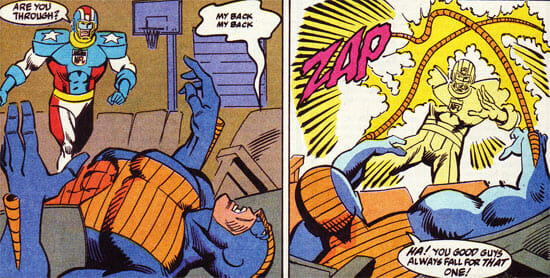 So much for Constrictor

After a few interesting issues, we’re back to the usual SuperPro tedium, with Phil and Ken exposing corrupt universities for taking advantage of football players. Thank goodness it’s almost done.

One more issue to go!

Writing on the Wall?

The ending to this issue was rushed, and it looked like the art was a bit rushed as well – especially towards the end during the Constrictor fight. Issue 7 introduced letters pages to the back of subsequent SuperPro issues, but these pages were noticeably absent here. I wonder if this is when the SuperPro staff learned their comic was cancelled.