Phil and Ken check out a camp that promises to give super powers to its attendees.

Ken and Phil get their new assignment

At the Sports Inside office, Phil and Ken are ordered by their boss to check out “Camp Runamuk,” which promises to give super powers to its attendees. But the whole thing looks like a scam – “an overpriced day camp for guys worried about their masculinity,” Phil says. 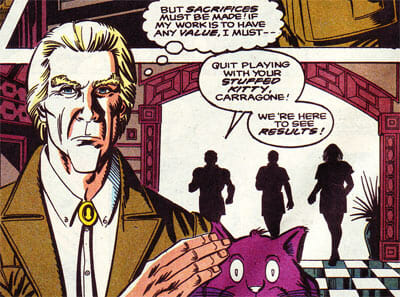 The camp is run by an elderly Peter Cushing-looking gentleman by the name of Carragone. He also has a cat soft toy that he carries around everywhere for some reason.

Phil and Ken arrive at the camp and meet a group of nerdlingers: Frank (mortician), Pennington (CPA), Kwong (actuary), and Tubby (clerk). Yes, his name is Tubby. 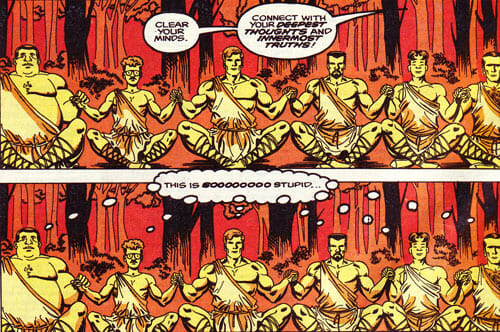 I love this sequence

At night, everyone gathers outside around a campfire. One by one, each of the nerds are called into the mansion to get zapped by Carragone’s ray as part of the experiment to see if they get powers. None of them get the results he wants and are deemed failures…until Phil is zapped and nets Carragone a false positive (since Phil already has powers).

Carragone thinks he’s made a breakthrough

Phil escapes the clutches of Carragone’s men and changes into his SuperPro costume, as all the nerds are taken back inside the mansion. SuperPro breaks through the window: “Hi, mind if I use your phone?” he asks, snarkiness up to maximum, “I want to tell the paramedics where to find you.” 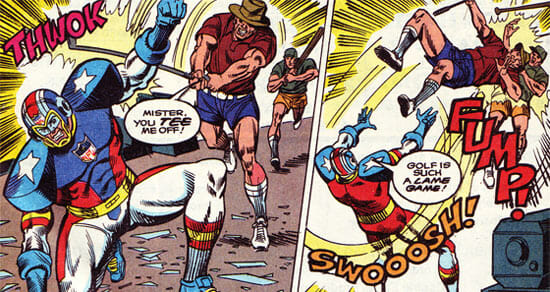 SuperPro fights Carragone’s men, but the nerds join in too. Turns out they did get super powers based on the abilities they already had: since Frank is a jogger he now he has super speed, Penny can “throw money at problems” AKA shoot green lasers, Kwong can quickly calculate probability, and Tubby is…well, he’s tubby.

Nerds to the rescue!

After the bad guys are beaten and their equipment is all destroyed, the nerds give each other superhero names and call their group the “Happy Campers.” They were probably never seen again in the Marvel Universe.

A fitting end to the issue

This was SuperPro‘s strongest issue yet! And surprisingly, it had very little to do with football or sports. The story had the right amount of fun, humor, and self awareness; it let go of SuperPro‘s usual preachiness and embraced the inherent silliness of having a sports-themed superhero. SuperPro should have been like this from the start, but with only two issues left, it’s a case of too little, too late.

Football puns: +1
This one had more golf puns, believe it or not.