A cyborg, a scientist, a rogue, and a martial artist team up to stop a madman from going back in time to conquer the Roman Empire. 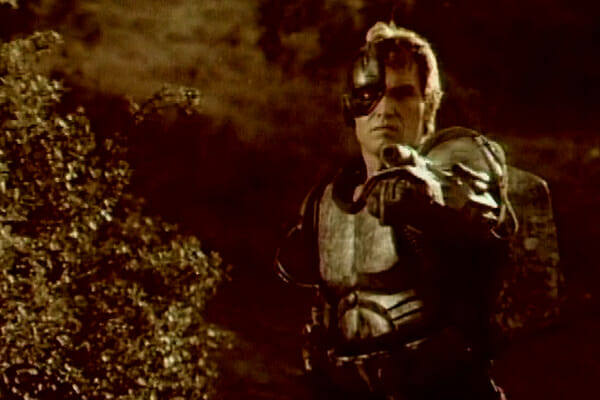 Mandroid in the sepia-tinted past

A pilot is injured in an airplane crash and rebuilt into an amnesiac cyborg named “Mandroid” by a megalomaniac named Abbott Reeves. As part of an experiment, Mandroid is sent to the Roman Empire by a time machine to pick up a shield from a centurion. 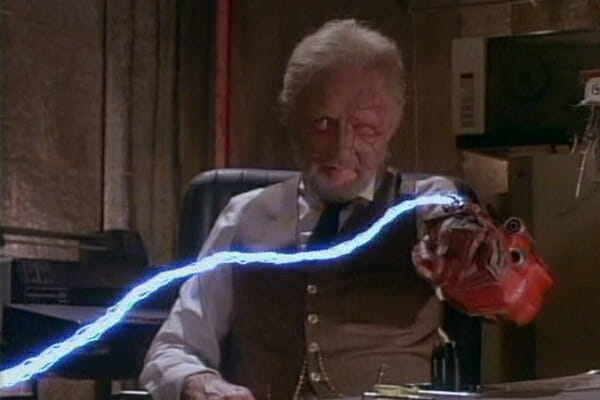 Mandroid escapes Reeves’ compound and heads over to a base of some sort to find Colonel Nora Hunter. She agrees to work with him to help stop Reeves, who’s using the cybernetic technology she’s invented for evil. 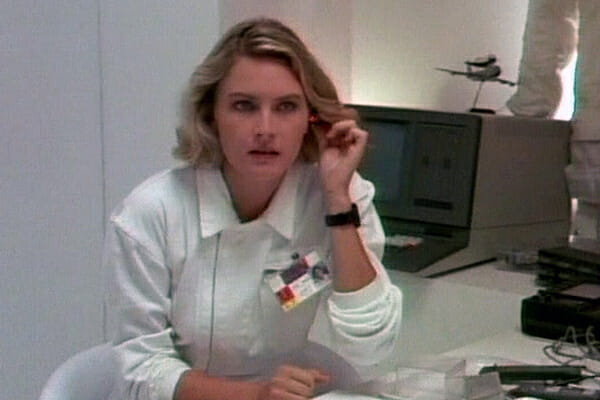 They head over to South America…and I’m not sure why they’re going here, if they’re going after Reeves – Mandroid just walked from Reeves’ compound to Hunter’s base! They go to a bar where Hunter hires a rogueish river boat captain named Harry Fontana. Other river boat captains get pissed off at Nora (for hiring Harry) and Harry (for just being Harry), and a river chase ensues. 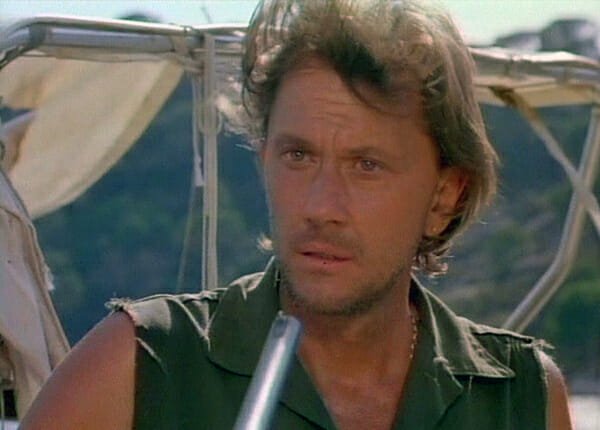 After making their escape, and dealing with mechanical issues, Nora and Harry are captured by a tribe of Neanderthals from Reeves’ time travel experiments. Fortunately, Mandroid rescues them with help from a martial artist named Kuji. 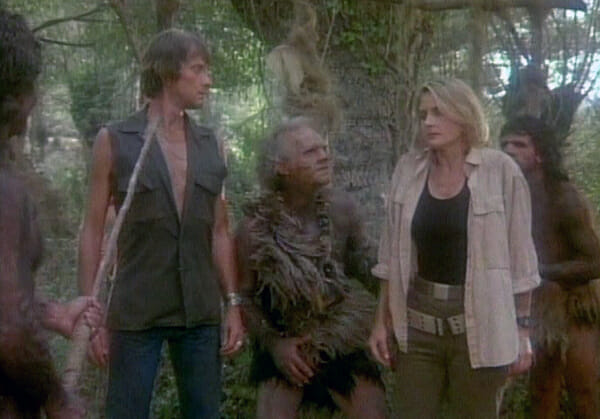 Nora and Harry are captured by Neanderthals

Return to the Compound

Mandroid, Nora, Harry, and Kuji arrive at Reeves’ compound and get in a huge-ass fight with all his men. Then, right when they all go down, Reeves shows up as a Mandroid-esque cyborg like he’s the final boss in a video game. 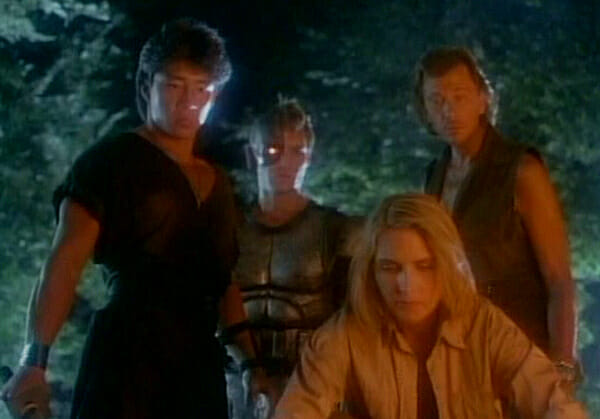 He wounds Mandroid and traps the other three in an energy bubble, then goes off to his time machine so he can go conquer the Roman Empire and rebuild the future in his image or whatever. 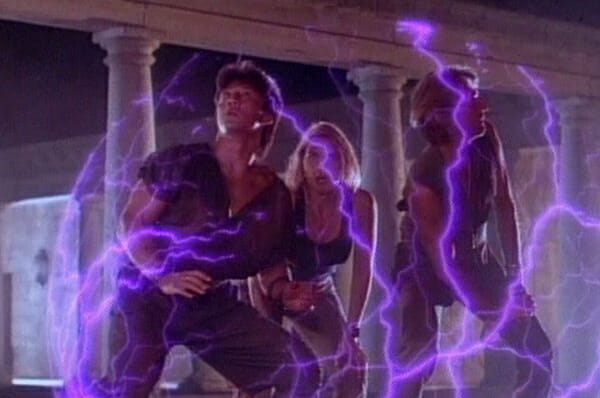 Mandroid uses the last of his strength to free his friends, then dies! Reeves activates the time machine, but Nora and the others redirect him to the prehistoric era. I desperately wanted a stop-motion dinosaur to show up and eat him, but it never came. 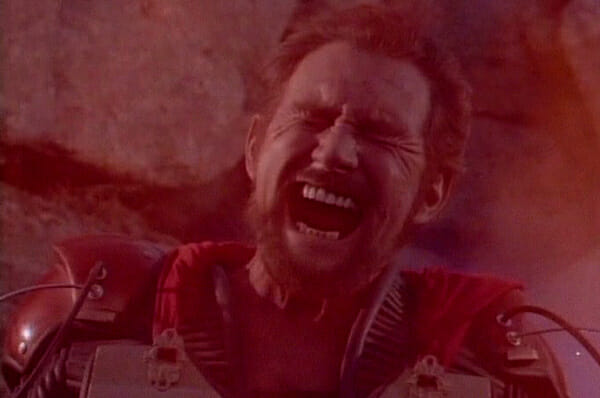 Reeves gets his just desserts

This was a lot of fun; I know others have said this before, but Eliminators feels a lot like a movie written by a kid playing with a bunch of action figures, and that’s a good thing! It just keeps throwing wild and crazy things at you: Robots? Sure. Neanderthals? Okay. Martial arts? Of course – and somehow, it all works. 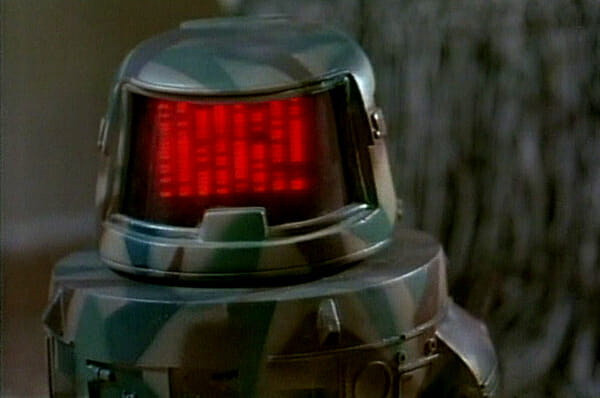 The only really weak part of the film was the plotline of Nora helping Mandroid find clues about his past that doesn’t really go anywhere. They find his crashed airplane, but that’s it, and it all gets ignored after that. 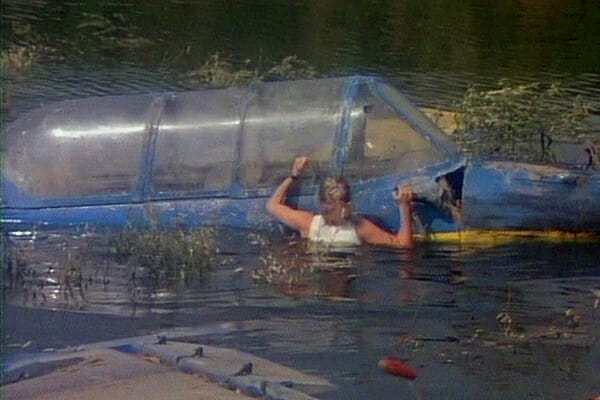 Nora checks out the crashed airplane

I was also really surprised at Mandroid’s death towards the end of the film (but not the end), considering he’s the main character. I kept expecting him to revive at the last minute to do something important, but he doesn’t. Hell, everyone else is too busy celebrating foiling Reeves plans in the final scene, that they don’t really stop to acknowledge Mandroid’s death or reflect on his sacrifice with something like “gee, couldn’t have done it without him.” 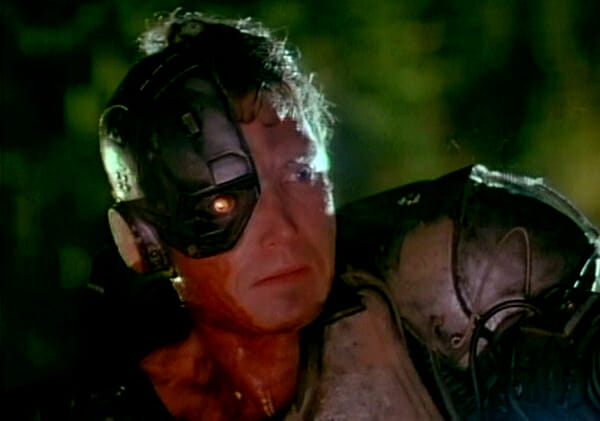 Mandroid shortly before his death

Eliminators isn’t as fun as Miami Connection or as self-aware as Manborg, but it’s still worth a watch. You won’t get bored, that’s for sure.