One good cop goes after the drug kingpin indirectly responsible for his partner’s death, while also taking care of said dead partner’s three daughters in this 1991 film. 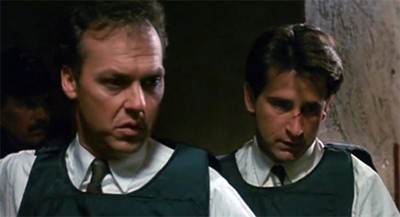 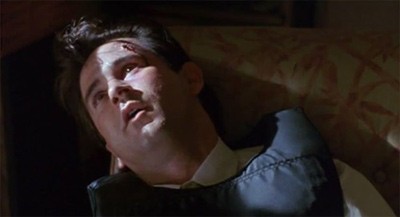 Things turn sour for Artie about twenty minutes into the film, when he and Stevie confront a guy high on drugs in a hostage situation; Artie tries to talk the guy down, but an impatient Stevie rushes in, getting himself shot and killed. 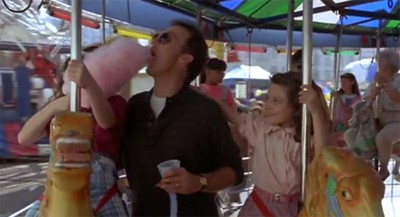 Fun at the carnival

With Stevie dead, who will take care of his three daughters? Artie and his wife Rita agree to temporarily foster them and help them deal with their dad’s death. For the rest of the film, we alternate between scenes of Artie and Rita trying to take care of the kids – dealing with one girl’s diabetes, having a scare at a carnival when one goes missing, etc. – with scenes of Artie investigating kingpin Beniamino Rios, the man who supplied the drugs to Stevie’s killer. 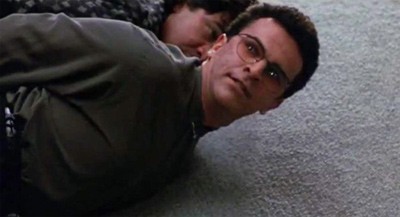 Artie and Rita grow to love the children and decide to adopt them, but to do so, they need to buy a house. Artie doesn’t have the money, so he puts on a mask and robs Beniamino. Artie does a really lousy job of hiding his identity; just before he leaves the apartment, he crumples a twenty dollar bill and throws it in Beniamino’s face, referencing a scene earlier in the film when Beniamino does the same to Artie.

Way to keep your identity a secret, Artie. It’s no wonder he soon gets kidnapped by Beniamino, who doesn’t take kindly to being robbed. 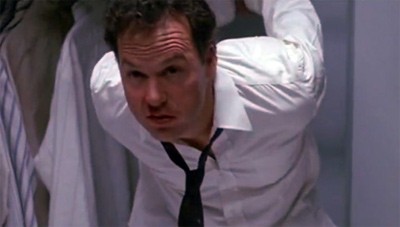 Artie gets caught by Beniamino’s men

In a stroke of luck, Beniamino’s girlfriend turns out to be an undercover agent. She frees Artie, and they shoot their way out of Beniamino’s apartment, killing all the bad guys. Afterwards in the police station, Artie gets a harsh lecture from his boss, but in true cop movie fashion, only gets a slap on the wrist.

Artie and Rita live happily ever after with their three adopted children.

Time for an awkward group hug!

I watched this film expecting a typical 80s cop movie, with cheesy saxophone music, quality one liners, and decent action. The cheesy saxophone music was a given, and this film easily met my expectations in that regard. However, there was little in the way of one liners, and the action sequences were few and far between. When they did occur, though, they weren’t bad – notably the scene early in the film when Artie and Stevie get in a tense fight with some peeps in an elevator.

After Stevie dies, though, the film slows down and we get into “gag me with a spoon” territory with the three “heartwarming” kids. The constant flip flopping between home melodrama and cop stuff felt awkward, and both storylines are worse off for it.

While I don’t regret watching this film, all the amusement I squeezed from it came from the cheesy music and dated styles. It’s a very typical story with unsubtle characters, and had it been made today, I would have avoided it for sure.