Set during the One Year War, this compilation film (originally a series of web shorts) is about an engagement between a group of Federation and Zeon ships in an area of space called the Thunderbolt Sector. 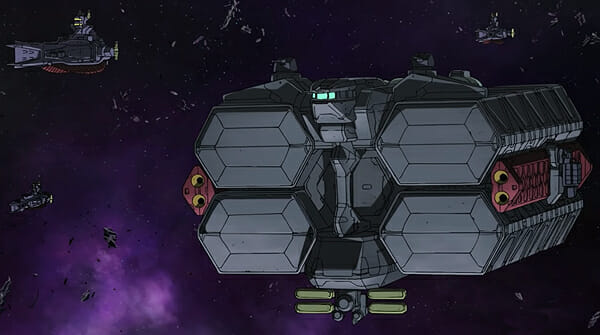 The Beehive and its escorts

On the Federation side we have the Columbus-class cargo ship Beehive and its escorts. They’re in pretty rough shape; the captain died some time ago and has been replaced by an unprepared acting captain named Claudia. 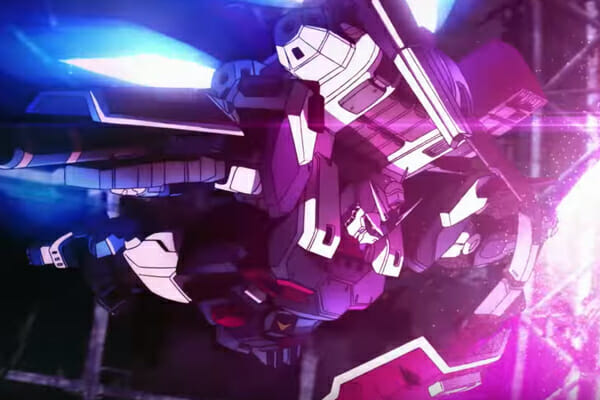 Her friend from Side 4, the jazz-loving Io, becomes a Gundam pilot by default after all the other good pilots are killed off. 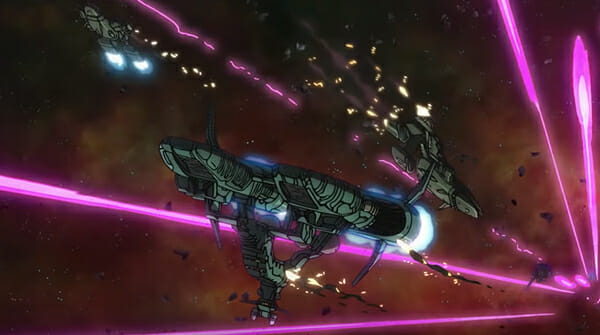 On the Zeon side, a science contingent has been stationed on the lead ship, doing experiments with amputee mobile suit pilots, improving their skill level in combat. One such pilot, a sniper named Daryl, is our focus. 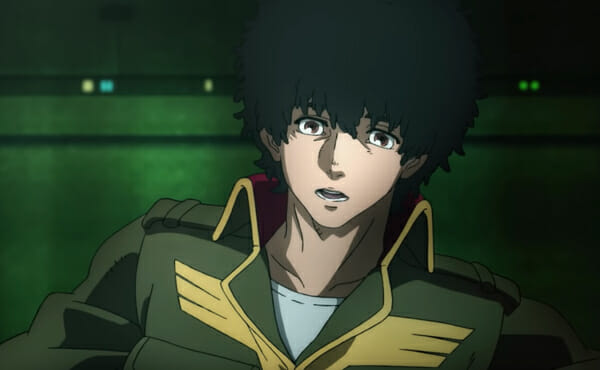 We get a series of battles between both sides, and Daryl forms a grudge against Io for killing his shipmates. 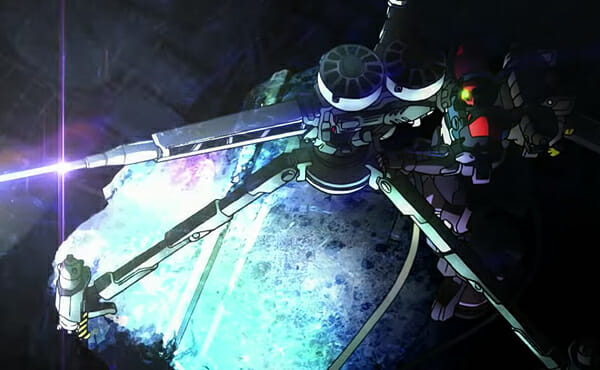 In the final confrontation, the Beehive is destroyed and the surviving Federation characters (Io and his mechanic friend) are picked up by Zeon reinforcements and imprisoned. 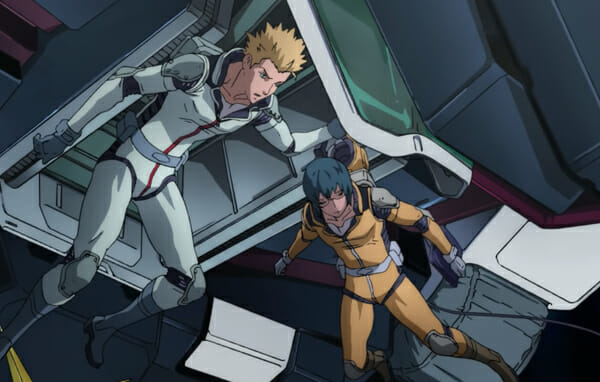 Io and his mechanic Cornelius

We end on a weird, 5 min. dialogue-less sequence showing the final battle of the One Year War, at the space fortress A Baoa Quo. The Zeon ship that Io and company are imprisoned on gets damaged and they’re able to escape. 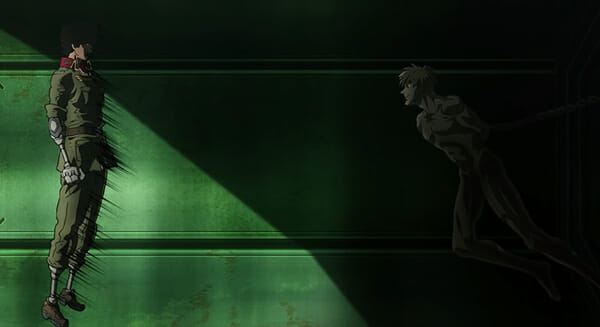 Daryl and Io meet in person

This film deals with the standard Gundam tropes: both sides have good people and bad people, rivalry between two pilots, etc. But what makes Thunderbolt unique is its dark, depressing, and desperate atmosphere. 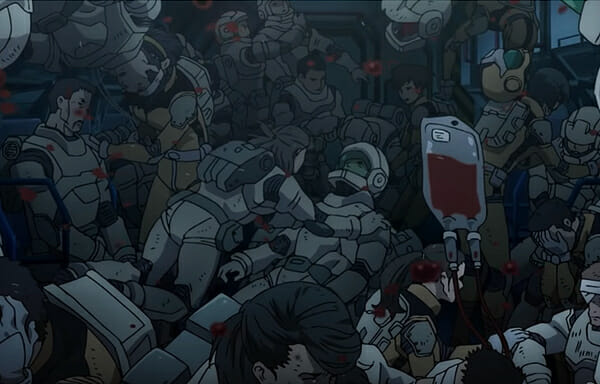 All the characters live in horrible conditions: crowded ships thinking of nothing but their next battle, Claudia can’t handle the pressures of command and tries to commit suicide by drug overdose, Daryl loses his hand in a fight with Io, then later has his other hand amputated so he can better pilot a special mobile suit. And in the most chilling part of the story, the Federation recruits a bunch of 12 year old kids to pilot mobile suits as cannon fodder! Suffice it to say, there is absolutely no comedy or lighthearted moments in this film. 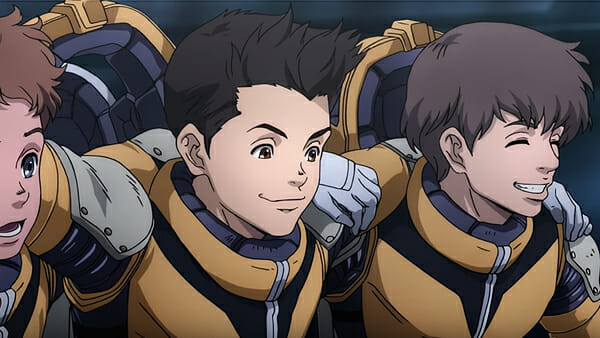 Out of the two main characters, I find Daryl to be the more sympathetic one. His constant flashbacks of running on the beach with his own two feet, later followed by a flashback of losing his legs were heartbreaking. 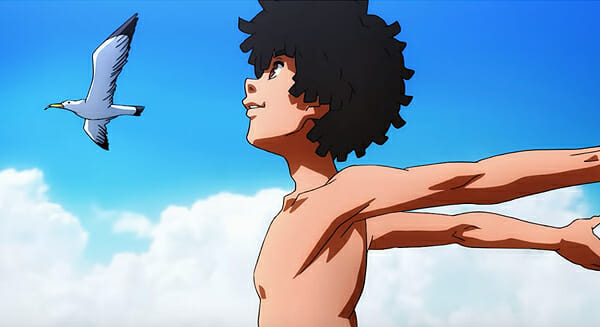 Io was a little too bloodthirsty and combat-driven to be likeable. And his habit of listening to jazz while fighting was more annoying than cool. 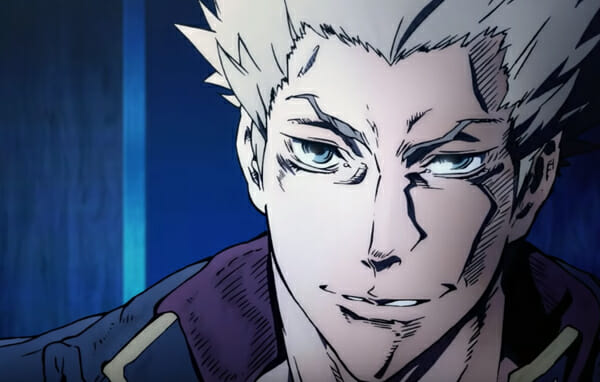 The A Baoa Quo denouement was added to the film version of Thunderbolt but it was unneeded and a bit confusing. It sets up and leads into the sequel, Bandit Flower, but I think Daryl’s in-person meeting with Io in the Zeon brig was a more suitable ending.

Thunderbolt is probably not recommended if you’re a newcomer to the Gundam franchise, but I think you’d get the gist of the story and could get away with watching it.