The Doctor and co. find themselves in the midst of the French Revolution. 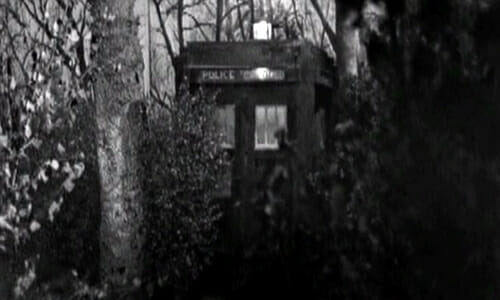 Episode 1: A Land of Fear

The TARDIS arrives in the countryside and the Doctor tells Ian and Barbara he’s finally returned them home, to 1960s England. Ian’s a bit skeptical – the Doctor’s already sung this tune before; they all step outside and find a kid who tells them, no, they’re in France. 18th Century France during the French Revolution’s Reign of Terror! 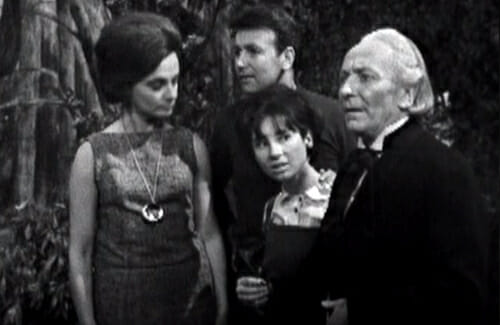 While exploring, the Doctor’s party comes across a farmhouse with a couple counter-revolutionary guys in there. The revolutionary army arrives and kills these guys, then apprehends Ian, Barbara, and Susan. The Doctor’s left inside the house, which is then set on fire. 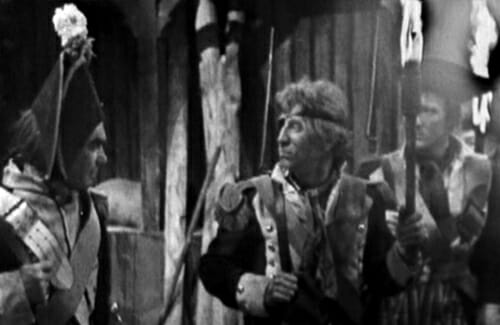 The soldiers start a fire

The boy from the last episode rescues the Doctor from the burning house. Cliffhanger resolved. 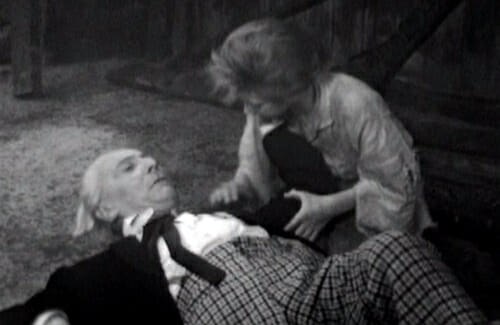 The boy helps the Doctor

The Doctor starts his journey to Paris and has a little side adventure with an asshole who forces him to dig holes (the Doctor gets out of that with trickery). 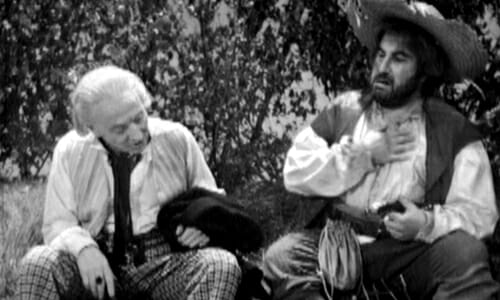 The Doctor and the asshole

Meanwhile, the Doctor’s companions find themselves in a Parisian prison; Susan and Barbara share a cell and start digging their way out, while Ian shares a cell with a dying man named Webster: “Find James Stirling and tell him to return to England.” 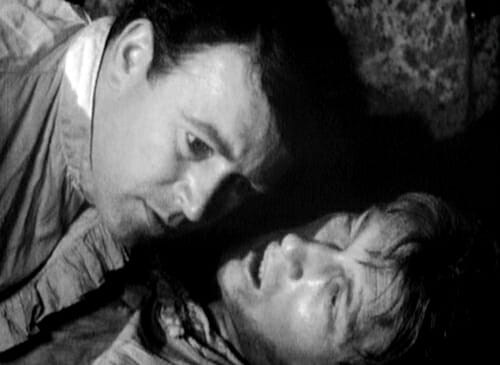 Episode 3: A Change of Identity

Ian escapes from the prison thanks to the careless jailer leaving the key in his door. Barbara and Susan, however, are led to the guillotine by wagon, but are rescued by two counter-revolutionaries (Jules and Jean) and taken to their hideout. Jules takes Barbara and Susan to his hideout

The Doctor arrives in Paris and acquires a fancy outfit from a tailor so he can pose as a VIP. He heads to the prison in an attempt to free his friends, but suddenly runs into Lemaitre (a head government guy) and is dragged to a meeting with Robespierre. 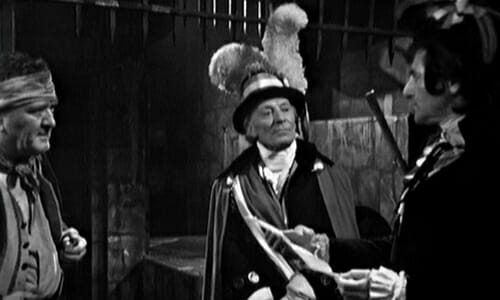 The disguised Doctor meets the prison warden and Lemaitre

Episode 4: The Tyrant of France 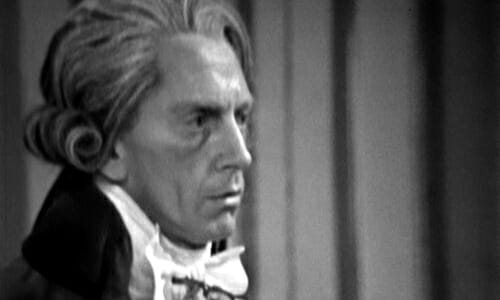 The counter-revolutionaries find Ian and reunite him with Barbara and Susan at the hideout. However, Susan’s become very ill; Barbara takes her to see a doctor, but it’s a trap! They’re captured and sent back to the prison. Ian also falls into a trap when he goes off to meet Leon, a counter-revolutionary who may have information on James Sterling. 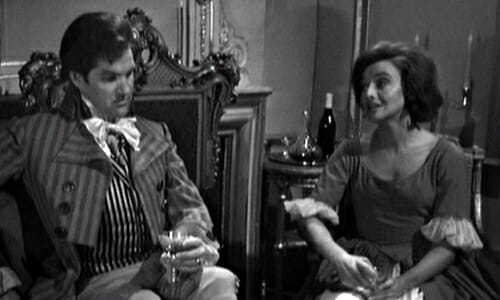 Leon chillin’ with Barbara at the hideout

Episode 5: A Bargain of Necessity

Jules rescues Ian from a group of soldiers and kills the traitorous Leon. 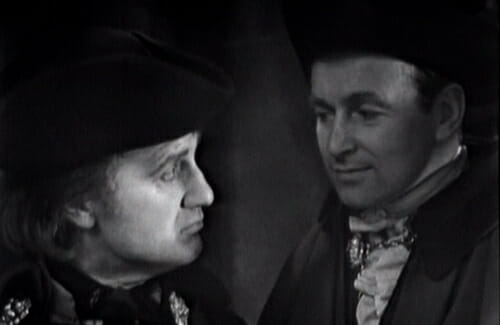 Back at the prison, the Doctor uses his influence to release Barbara, and sends her back to Jules’ hideout. Releasing Susan proves to be more difficult, though, as Lemaitre gave the jailer strict orders not to open her cell door. The Doctor tries to bust her out anyway, but Lemaitre catches him and confronts him on his false identity. 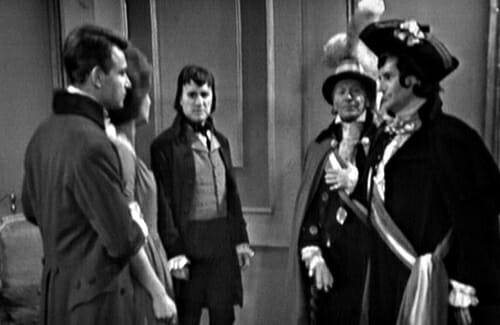 The Doctor is forced to take Lemaitre to the hideout

Lemaitre forces the Doctor to take him to Jules’ hideout, then reveals he’s James Sterling. Ian passes on Webster’s message, including information about a secret meeting at a tavern. 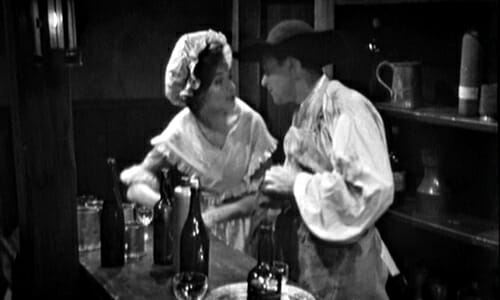 Barbara and Ian work undercover at the tavern

Ian, Barbara, and Jules are sent to the tavern to eavesdrop on this meeting between Rosepierre’s man Barras and Napoleon about overthrowing Rosepierre. Sure enough, Rosepierre is overthrown the next day and taken to the prison as the Doctor releases Susan. 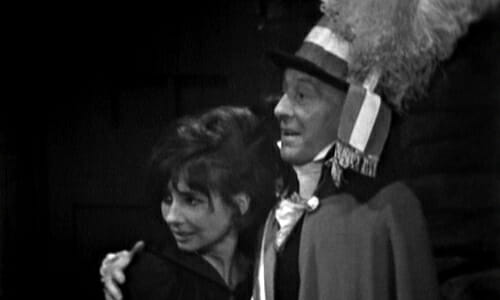 Susan and the Doctor – together again

With the Doctor and companions together again, Lemaitre arranges a (stock footage) carriage to take them back to the TARDIS. And since this was the first season finale, the Doctor ends the serial by saying something profound: “Our destiny is in the stars, so let’s go and search for it.” 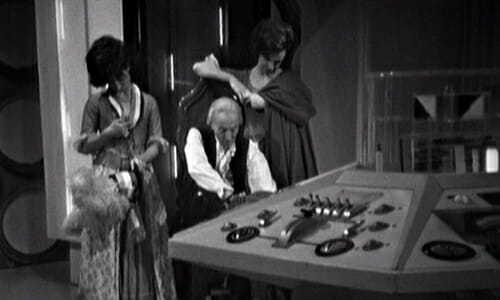 Back in the TARDIS at last

I’m not a big fan of Doctor Who‘s historicals, but I liked this one. It’s a fairly standard Doctor Who plot where the Doctor and companions hook up with the resistance (whose members are all too welcoming and friendly) and just start doing stuff on their behalf so they can get back to the TARDIS or whatever. The behind the scenes story, by the way, about the difficulties in making this serial is really interesting. The poor director was under so much stress he collapsed in the middle of production! 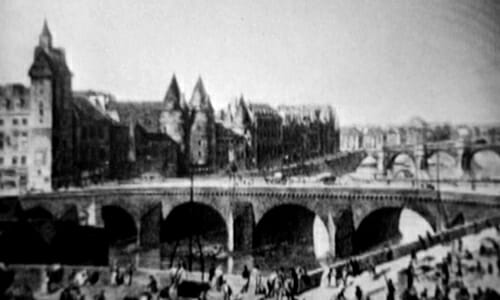 Welcome to (a photo of) Paris

With its limited budget, the show did a pretty good job of bringing Paris to life as best as possible, with assistance from stock footage/photos and sound effects. At six parts, this serial did drag at moments, though. The subplot in episode 2 with the Doctor and that digging dude was unneeded, fun as it was, and the purpose of the secret meeting in the tavern seemed to just be an excuse to show Napoleon. 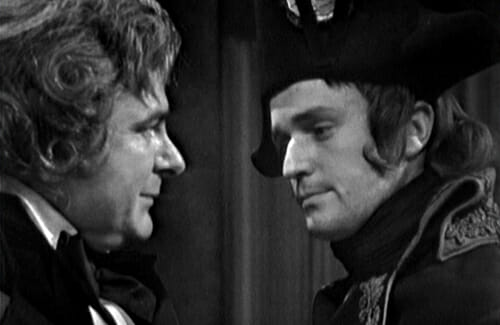 Episodes 4 and 5 are missing but received animated reconstructions for the DVD release. The animation is well done, but there were far too many quick cuts, making some scenes a bit disorienting or hard to follow, such as when Jules fought the soldiers in episode 5. 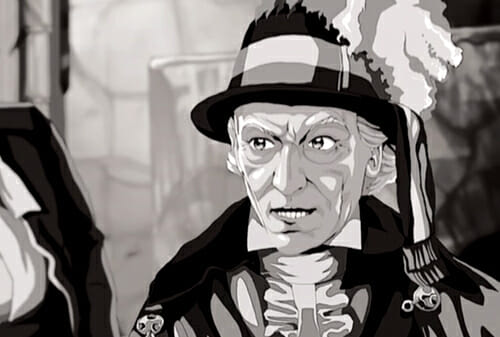 While Ian was “action man” as always, Barbara got some nice scenes this serial: her brief romance/flirtation with Leon and reaction to finding out he was killed/a traitor, her little fight with Ian in episode 5, and her reference to the lesson she learned from The Aztecs. 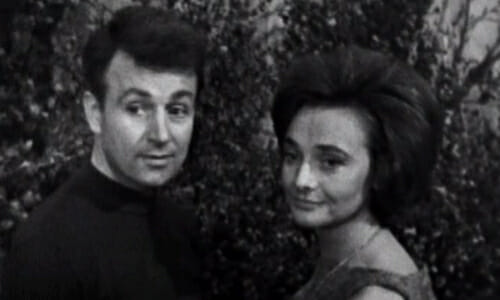 Susan, meanwhile, was just plain awful. She just complained about feeling sick, having a headache, and being afraid of rats. I can see why actress Carole Ann Ford left the show soon after this.