In the ’80s, Marvel Comics got the rights to reprint Doctor Who comics that initially ran (in black & white) in the UK’s Doctor Who fanzine. From 1984 to 1986, Marvel published a total of 23 issues, but for one reason or another, these reprints were cancelled.

This discovery sure looks familiar

Our story begins in the present (well, 1982) in, where else, but a quarry, where two worker guys unearth a strange object embedded in 5 million year old rock – the TARDIS!

What more could any Time Lord ask?

News of this discovery travels fast and the Doctor reads about it in a newspaper at a Stockbridge Inn.

“Good grief!” He says, rushing out and blaming himself for neglecting his beloved ship. 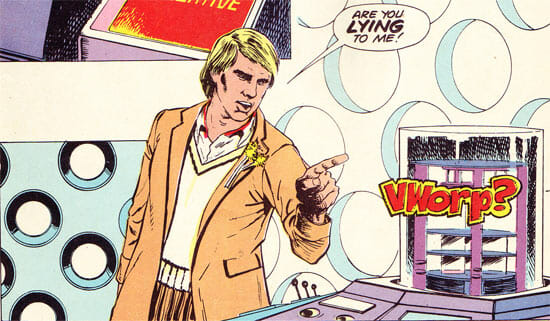 The Doctor doesn’t believe the readings from the TARDIS computer

But he finds it safe and sound in the middle of a forest, albeit covered in mud. The Doctor analyzes a sample of this mud under a microscope and learns it’s 500 million year old limestone; apparently the TARDIS has been going places without his knowledge.

The Doctor then decides to go out for a stroll and gets hit by a fire engine, but manages to limp back to the forest. 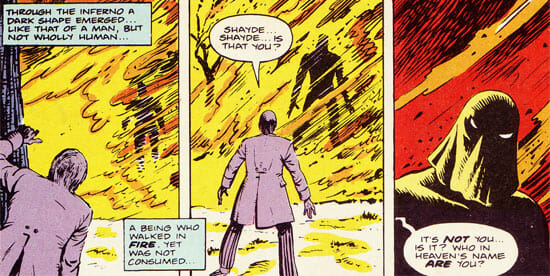 The forest has been set ablaze by a hooded, Cobra Commander look-alike with a fire fetish. The Doctor rushes into the TARDIS and dematerializes…but Cobra Commander hitches a ride.

A battle of some sort with the Sontarans

Skant the Sontaran and his forces continue in their attempt to conquer Medieval (?) England with the help of a kidnapped astrologer named Demimom. There’s a lot of fighting between the human and alien warriors. As Skant prepares to fire turret guns at some of the villagers (including Demimom’s daughter), Demimom strikes the back of Skant’s neck, presumably killing him.

Demimom then leaves the Sontaran ship with a “magic” crate, which is immediately pierced by an arrow and explodes. A dying Demimom reunites with his daughter and tells her the prophecy he heard was wrong. 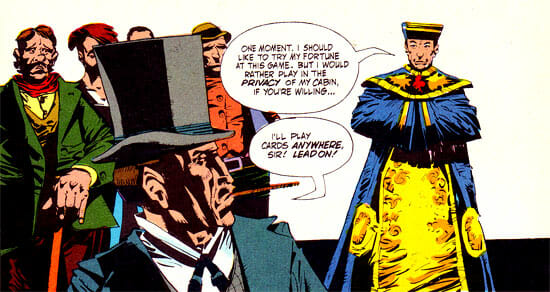 The Celestial Toymaker is always up for a game

A group of gamblers play poker on a steamship on 19th century Earth. The Celestial Toymaker appears, asking if he can play; one of the men, Gaylord Lefevre, takes him up on his offer.

The Toymaker takes Gaylord to his realm and they start the game. Gaylord tries to cheat, but the Toymaker cheats him back harder, angering Gaylord enough that he pulls out a pistol and shoots. It doesn’t work, as a smiling Toymaker says: “This is my domain, mortal! Here, I control all! Even gravity itself – and now the game is forfeit! And you must pay!”

Gaylord is transformed into a toy and trapped in the realm forever.

It’s a little hard evaluating The Stockbridge Horror, since it’s a part of a whole and its purpose is to set the stage for the ensuing installments. I was a bit confused by the TARDIS mystery, though; at first I thought there were two TARDISes – the Doctor’s in the forest and the one that was buried in limestone for 5 million years, but it turns out they’re the same and that it somehow moved from the limestone into the forest. Maybe one of the other five parts of the story helps clear this up.

I did like how the comic depicted the Doctor’s injury after he’s hit by a fire engine. A lot of media have characters get hit by cars all the time, but are none the worse for wear. But here, the Doctor is really messed up and the injury slows him down a lot. Hooray for realism! 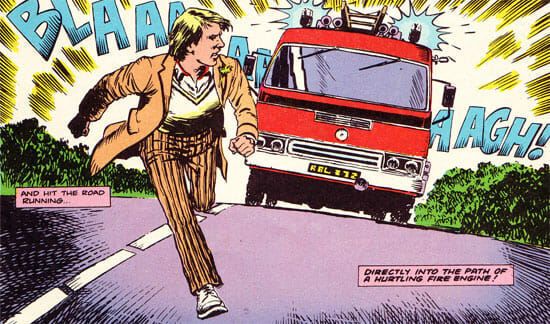 The back-up stories, on the other hand, were a bit weaker. The Sontaran one was dreadfully boring, and while the Toymaker one fared better, it didn’t really have much to say other than “don’t cheat this guy.” However, I do like how they offer a nice glimpse into the larger Doctor Who universe.

In the middle of the comic there’s a little section called Who Knows offering news of the then-upcoming season 24, which contained the Trial of a Timelord storyline.

And of course, finding the missing episodes was still a major issue then as it is now. Producer JNT mentions that despite a fantastic 1984, which heralded the return of 3 missing episodes, that so far the search in 1985 was progressing “very disappointingly,” and that while there have been some leads, nothing had turned up.

But 1985 ended up being a pretty good year for missing episode discoveries, as 9 were found!