In case you’ve been living on Asteroid M all your life, you should know who the X-Men are. Marvel comics superhero mutants, fighting people who fear and hate them, etc. As far as animated adaptations go, the X-Men made a smattering of appearances in Marvel cartoons over the years but didn’t get a show all to themselves until 1992.

X-Men The Animated Series is a favorite of mine, and to date I consider it the best X-Men cartoon. Sure, it has its problems, but none of the later cartoons could match its energy, style, tone, and watchability.

This show is also heavily serialized, which was virtually unheard of at the time in cartoons – Gargoyles (famous for its serialization and story arcs) was still two years off, and the only other serialized, non-anime out there at the time was what, The Rocky and Bullwinkle Show?

This cartoon also has the closest ties to the comic books, not just with its stories and colorful costumes (toned down in later cartoons to become more realistic due to the 2000 film), but also in its artwork. All the characters are extremely detailed – we see individual strands of hair on Rogue and Storm, body hair on Wolverine, tons of shading, and huge muscles on everyone. It’s rare for cartoons to have intricate character designs such as these. You could take a screen capture from an episode and it could almost fill in for a panel in the comics.

Of course these detailed character models come at a heavy price: flat, jerky animation. But honestly, I never really noticed it at the time, and now it’s not really a big deal to me. The stories and the voicework transcend this weakness.

Now for the voicework. In a word, “fantastic.” Yes, many voices are over the top (especially Storm), yet very memorable. Countless people, myself included, now hear the voice actors of this show when they read X-Men comics. Cal Dodd IS Wolverine. 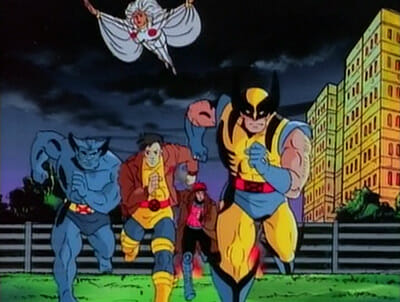 A Mutant Registration Act was recently passed requiring mutants to identify themselves. It’s marketed as a way for mutants to get protection, but in actuality it just allows the powers that be to know the location of every mutant. Why? So the 50-foot tall robot Sentinels can hunt them down and kill them, of course. 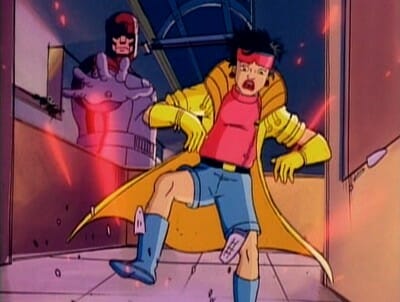 Jubilee runs from a Sentinel

Tonight, teenage Jubilee is the target of one such Sentinel, which follows her to a mall. Coincidentally, fellow mutants and X-Men members, Storm, Rogue, and Gambit are also here shopping. They fight off the Sentinel but get beaten up; it takes the arrival of blue-spandexed Cyclops, another mutant and X-Man, for the Sentinel to go down for good.

Jubilee later awakens in Professor Xavier’s mansion, where she observes the remaining X-Men members in their native habitats – the blue, ape-like Beast, shapeshifter Morph, telepath/telekinetic Jean Grey, and the Professor, also a telepath, himself. He detects Jubilee’s presence, and in a panic, she runs to the Danger Room.

The Danger Room is the X-Men’s training room, and as the name implies, it’s a dangerous room to be in. There, Jubilee sees Gambit sparring with the final member of the X-Men, Wolverine. Thinking Wolverine an enemy, Jubilee shoots him with fireworks (her mutant ability). 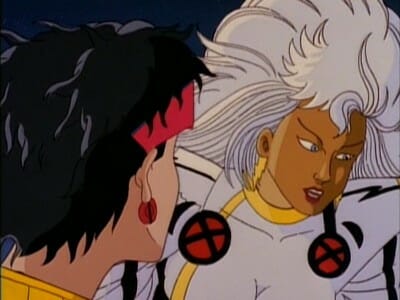 Jubilee and Storm have a talk

After the excitement passes, Storm later has a chat with Jubilee on the mansion balcony about mutants and who the X-Men are, imparting helpful expository information to Jubilee and the audience.

Having studied the remains of the Sentinel from the mall, Professor Xavier orders the X-Men to break into a building belonging to the Mutant Registration program and destroy the files on all registered mutants. They take the Blackbird jet, their vehicle of choice, and head over there. Storm, Beast, Wolverine, and Morph break in, while the remaining X-Men stand guard outside.

Meanwhile, worried for her foster parents’ safety, Jubilee leaves the mansion but is immediately captured by a Sentinel. 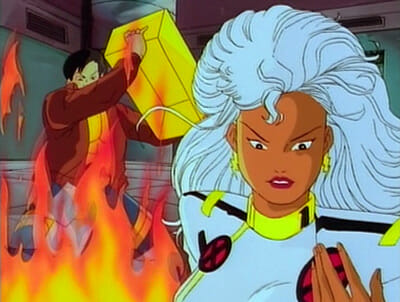 Burn the files! Burn ’em all!

Storm and the others take out the guards and successfully destroy all the files. On the way out, they’re ambushed by Sentinels. “Hey Tin Man, I’m taking you back to Oz…in pieces” quips Wolverine, slicing one up with his claws. The X-Men put up a good fight, but Morph is shot and (presumably) dies, and Beast is left behind; Wolverine isn’t too happy about either of these events. 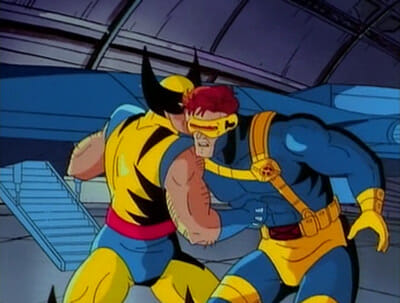 Henry Gyrich, the mastermind behind the Sentinels (along with their creator Bolivar Trask) meets with the US President. She (!) tells him to cancel the whole mutant registration thing and to close up shop. Yeah, right.

Cyclops encounters a Sentinel after a chat with Jubilee’s foster parents. He damages it and he and the other X-Men follow it back to its home base, where they trash everything, destroy all the Sentinels there, and rescue Jubilee. Trask and Gyrich escape.

Jubilee says goodbye to her foster parents and joins the X-Men. 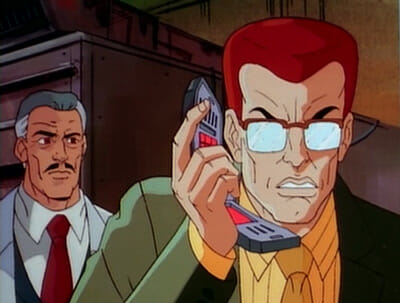 I know a lot of people think Jubilee’s really annoying, and, well, she kinda is, but using her as a viewpoint character was a pretty good use for her, especially here.

This episode does suffer quite a bit from “first episode-itis” with all its character introductions and backstory dumps at inopportune moments. Like, while sneaking around the Mutant Registration building, did Rogue really have to tell everyone about the first time she used her powers? She wasn’t even talking to Jubilee, but colleagues she’s worked with for years who presumably knew this story already. 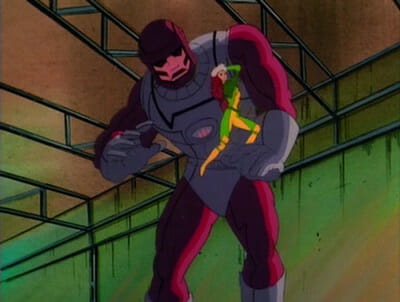 Rogue takes on a Sentinel

As in the earlier X-Men comics, we don’t see any students in Xavier’s School for Gifted Youngsters, or…anyone apart from the X-Men. I’m okay with this. Besides, the later X-Men cartoons (especially Evolution) dealt more with the school aspect, anyway.

Sentinel strength is pretty inconsistent in this episode. One can handle Storm, Rogue, and Gambit at the beginning of the episode, then at the end (and later episodes) the Sentinels are getting destroyed in droves. 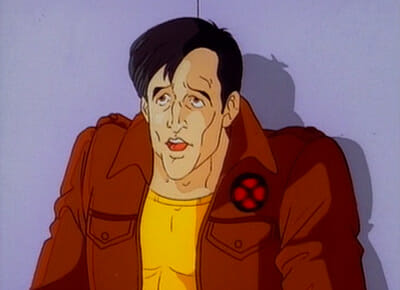 The only major flaw with this episode is the weird flashback stuff in the second part which messes with the episode’s flow and pacing. There’s the scene of the Sentinels attacking the X-Men, which gets interrupted by a quick cut to the X-Mansion with Jean sensing Morph’s death. After that, the X-Men arrive at the mansion, and Wolverine has a flashback to just a few minutes ago, where we see the rest of the battle. It’s really jarring and could have been handled better.

The purpose of this is simply to cover up Morph’s death because while this show can allude to death, it can’t actually show it. Killing someone off in the first episode, even through allusion (and presumed allusion at that!), was pretty daring at the time and was a good way of raising the stakes. I applaud this choice.