Tempted by a possible cure for her mutant abilities, Rogue travels to Muir Island. 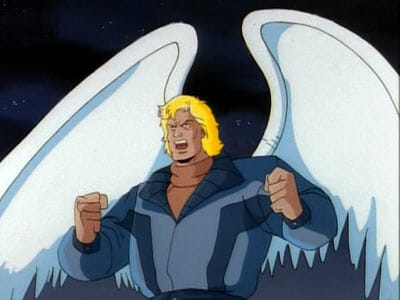 Angel is not happy

At a cabin in the Alps, Warren Worthington III (AKA “Angel”) spends quality time with his girlfriend. The mood is spoiled when Cable breaks in demanding to know where to find a Dr. Adler, the man responsible for creating the collars used on Genosha.

Naturally, a fight between the two mutants starts and Cable shoots Angel off the balcony into the snow. Cable reassures Angel’s girlfriend, “He’s all right, my weapon’s set to stun.” She tells him that Dr. Adler is in Scotland. 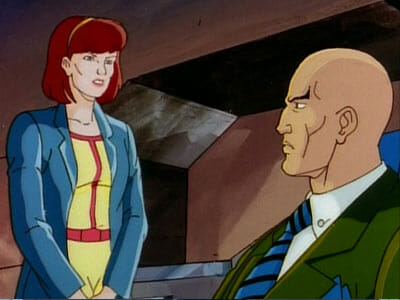 Who is Dr. Adler?

On Muir Island, north of Scotland, Professor Xavier meets with his friend Moira MacTaggert, an expert on genetics and sciencey mutant stuff. They discuss Dr. Adler’s work and how he’s apparently developed a “cure” for mutants.

A visit to the Adler’s laboratory proves fruitless as the evasive doctor prefers to remain evasive: “Visitors are verboten. Not allowed!” The Professor tries to probe his mind, but gets strange visions. He wonders if Dr. Adler himself is a mutant… 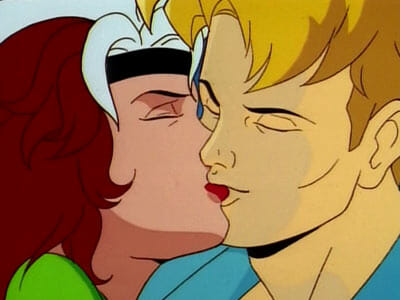 Rogue remembers the first time she used her powers

The X-Men continue to rebuild their mansion after its destruction at the hands of Juggernaut. Xavier contacts them to tell them of Dr. Adler’s cure, which catches Rogue’s interest. Being unable to touch anyone sure makes for a lousy, lonely life. She hitches a ride on a plane and heads to Muir Island. 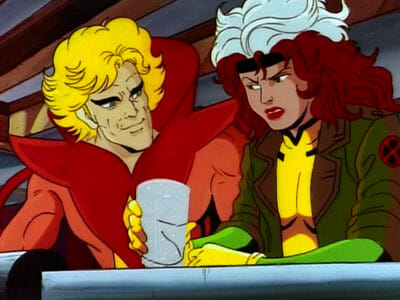 Rogue meets with Dr. Adler and agrees to undergo the treatment. Suddenly, troublemaking mutants Pyro and Avalanche attack the laboratory and kidnap Adler, who turns out to be their acquaintance, the shapeshifting Mystique, in disguise. She says there is no cure, and that she’s working for a mutant named Apocalypse. Whoever undergoes the “treatment” becomes his slave. 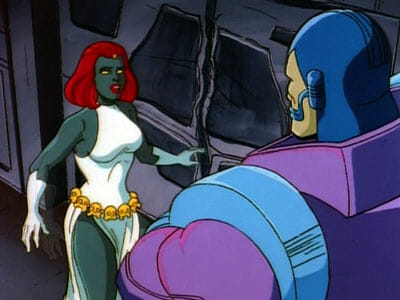 Mystique is working for Apocalypse

Mystique returns to her Adler form just in time for Cable to find him/her, then the Blackbird arrives with Jean and Cyclops, and they get in a short fight with Cable before he escapes. Later, Rogue helps Dr. Adler clean up his laboratory – she’s decided that she doesn’t need the cure after all because she can do a lot of good with her powers. Rogue leaves, bumping into Angel on the way out. 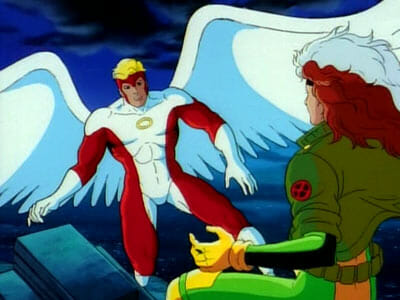 Mystique heads outside and meets with Apocalypse. “I’ve found another mutant to become your slave,” she says. Apocalypse is extremely loquacious, saying in three sentences what one can say in six words, but his reply pretty much amounts to: “I want to destroy the world.” 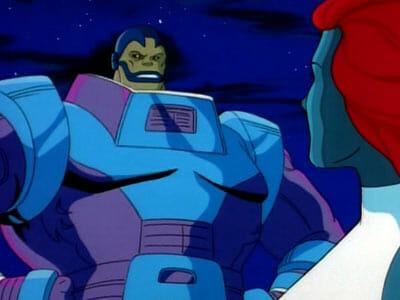 This time we focus on Rogue, who we see is conflicted by her role as an X-Man and her desire for a normal life. I did find her change of heart at the end of the episode a little too fast, but it is a cartoon where (most of) the plot needs to be resolved at the end of the 22-minute runtime.

Mystique makes her first appearance this episode, as do Avalanche and Pyro, who I felt were underutilized in the show, especially the latter two.

Cable shows up again and his presence once again detracts from the episode’s overall quality. While he acts as a deus ex machina in the Genosha episode, he’s more of a non sequitur here, dealing with his own stuff and not sharing it with the rest of the cast. Fortunately, that’s it for him this season. He’ll have a proper introduction next season. This show makes yet another interesting move by introducing Apocalypse in its first season, when we’ve already had a lot of heavy hitters like Magneto and the Sentinels. It almost makes for a crowded list of big bads this season, but it actually works. Besides, Wolverine and the X-Men saved Apocalypse for its second season…and it was cancelled before it could get there. Correlation? Perhaps.